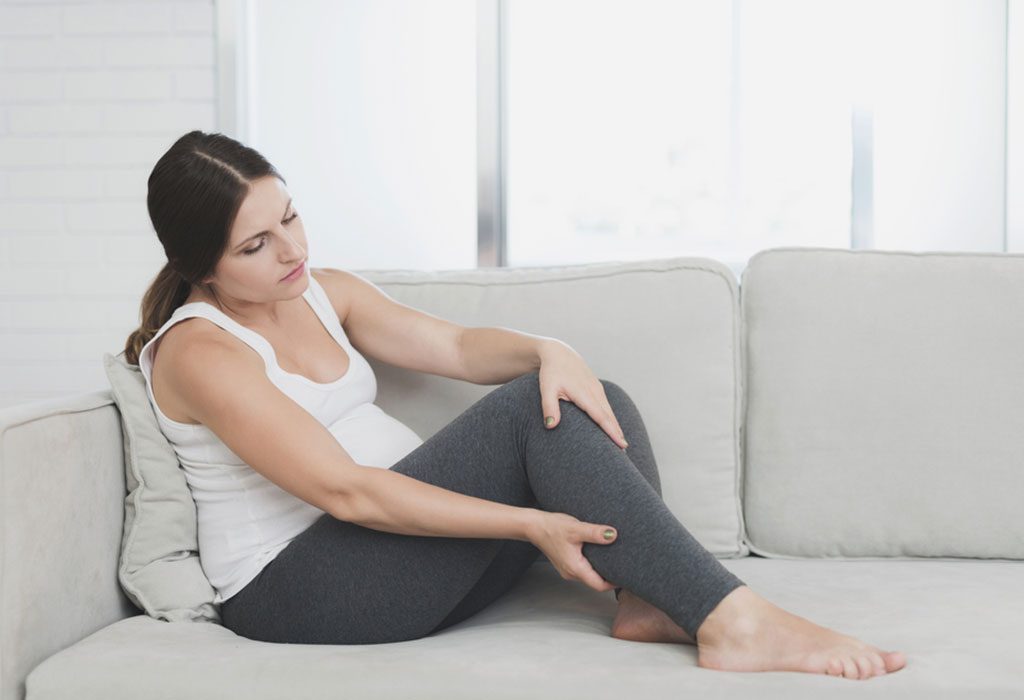 Along with many physiological changes, pregnant women are susceptible to Deep Vein Thrombosis (DVT). Veins are tubes that transport blood in the body and blockage in these veins is termed as venous thrombosis. During pregnancy, a woman has a six-times higher chance of developing such a clot in the vein, compared to a non-pregnant woman. Learn about the various aspects of DVT, its causes, symptoms, treatment and prevention.

What Is Deep Vein Thrombosis (DVT)?

In deep vein thrombosis, clotting of blood occurs in the veins found in the legs and pelvic region. Clotting of blood is a normal physiological process in the body and occurs when there are any cuts or openings in the blood vessel. In the case of DVT, this occurs inside the vein, constricting the flow of blood resulting in serious implications, if left unidentified. Thrombosis in pregnancy is caused by an increase in the blood clotting capacity of the body during pregnancy, as a means of preventing excessive blood loss during delivery. This can sometimes result in a blood clot in the leg during pregnancy.

How Common Is DVT During Pregnancy?

DVT during pregnancy is not very common and occurs in one in a thousand pregnant women. The risk of developing DVT is six times more in a pregnant woman, with an increased chance of occurrence in the first trimester of pregnancy and six weeks post-partum.

Why Is It More Common During Pregnancy?

The body experiences numerous physiological changes during pregnancy. Variations in the hormonal levels mostly drive these changes. As a safety precaution, the clotting proteins increase, and the anti-clotting proteins decrease naturally in a woman’s body during pregnancy to minimise blood loss during delivery. Another factor that can contribute to this condition is the pressure exerted by the enlarged uterus on the veins which carry blood to the heart from the lower body.

Causes of DVT During Pregnancy

DVT is primarily caused by the hormonal changes the body undergoes during the pregnancy term. However, there are other reasons, too. Read on to know them.

During pregnancy, the circulating levels of estrogen hormone are high in the blood, which in turn increase the chances of a blood clot.

The expansion of uterus that occurs with the development of the foetus puts a lot of strain on the veins carrying blood back from the lower body to the heart. This also results in the clotting of blood inside the veins, returning from the extremities.

Excessive weight gain puts a lot of pressure on the veins of the legs and pelvis, thus increasing the chances of DVT.

Mothers carrying more than one foetus in their womb have a higher risk of developing DVT.

Women who have a family history of DVT or are expecting a baby at 35 years of age or more are at risk of experiencing venous thrombosis during pregnancy.

Women who develop DVT during their pregnancy have one or more of the following symptoms: Diagnosis of DVT During Pregnancy

Based on the symptoms and previous family history of DVT, the medical practitioner usually performs a Doppler ultrasound examination to check for any venous blocks. The Doppler ultrasound estimates the speed of blood flow in the veins and flags the areas that have reduced flow. The diagnosis of DVT can be very tricky, and in some cases, the doctor may prescribe a D-dimer test. This test works by identifying the presence of any blood clots in the blood vessels.

Doctors also carry out a venogram, in which a dye is injected into the veins to clearly visualise any blockage. This helps quantify and characterise the blockages.

Who Is at Risk of Getting DVT During Pregnancy?

Pregnant women who have one of the following risk factors have an increased susceptibility to developing DVT.

Treatment of DVT During Pregnancy

Once a diagnosis of DVT during pregnancy is made, the doctor usually prescribes medications to thin the blood. This medication is continued after delivery up to at least six weeks post-partum, as there are chances of blood clots even after the birth of the baby.

Does DVT Affect the Baby?

Typically, DVT causes discomfort to the mother but does not affect the baby’s growth and development. Rare situations when the block moves up till the lungs, affecting its function, it can hamper the oxygen supply to the foetus. Also, during delivery, when the mother loses excessive blood because of the blood thinners, it can affect the baby.

Management of DVT During Pregnancy

Management of DVT during pregnancy is possible with heparin injections. Heparin is an anticoagulant that inhibits the clotting of blood. Apart from the medication, some lifestyle changes like adopting an active routine, reducing body weight and quitting smoking can also largely prevent the further clotting of blood.

Special kinds of compression stockings can be worn to improve the blood circulation in the legs. Apart from that, drinking ample water and exercising also help manage DVT during pregnancy.

How to Reduce the Risk of DVT While Travelling

The chances of the symptoms of DVT flaring up is high during travel. To reduce the risk while travelling, take precautions, such as increasing your water intake, ensuring the constant movement of the lower body either in the sitting position itself or by walking within the vehicle, and completely avoiding alcohol intake.

If you have been identified to have a tendency to develop DVT, then the doctor would advise you to take some precautions before the delivery. To reduce the risk of developing thrombosis during labour, you can wear the compression stockings while constantly moving around and drink lots of fluids before going to deliver the baby.

If you have already been diagnosed and are on heparin medications, the doctor may ask you to discontinue it as it can interfere with the clotting of blood after delivery. Can Caesarean Delivery Increase Risk of Getting Blood Clots?

Yes, a C-Section delivery is shown to increase the risk of post-partum blood clots, as compared to vaginal birth. This is because the body takes necessary precautions and mobilises its healing mechanisms for an invasive procedure, one of which is an increase in the propensity of the blood to clot.

Prevention of DVT During Pregnancy

Some of the ways by which you can prevent the occurrence of DVT during pregnancy are:

Fluid intake is very important in the prevention of DVT as it dilutes the blood and prevents it from becoming very thick. This has to be followed throughout pregnancy and even after delivery to prevent the formation of blood clots.

If you are at the risk of developing thrombosis during pregnancy, then practising light and safe exercises regularly can immensely help in improving the blood circulation in the body. Exercises that particularly benefit the circulation of blood in the lower body can be helpful in preventing DVT.

If you are having DVT and have to travel long distances on a regular basis, then try to move around inside the bus, flight or train every few minutes to break the resting period. This keeps the circulation alive. If getting up and moving around is not a possibility, then try to do simple twisting and moving exercises in the sitting position itself.

Compression stockings that activate the blood circulation in the leg can be worn during pregnancy and even during labour to avoid clot formation.

DVT is a common condition many pregnant women lack awareness about. It is easily treatable with medications, and identifying it at the right time is the key to have a safe and healthy pregnancy.