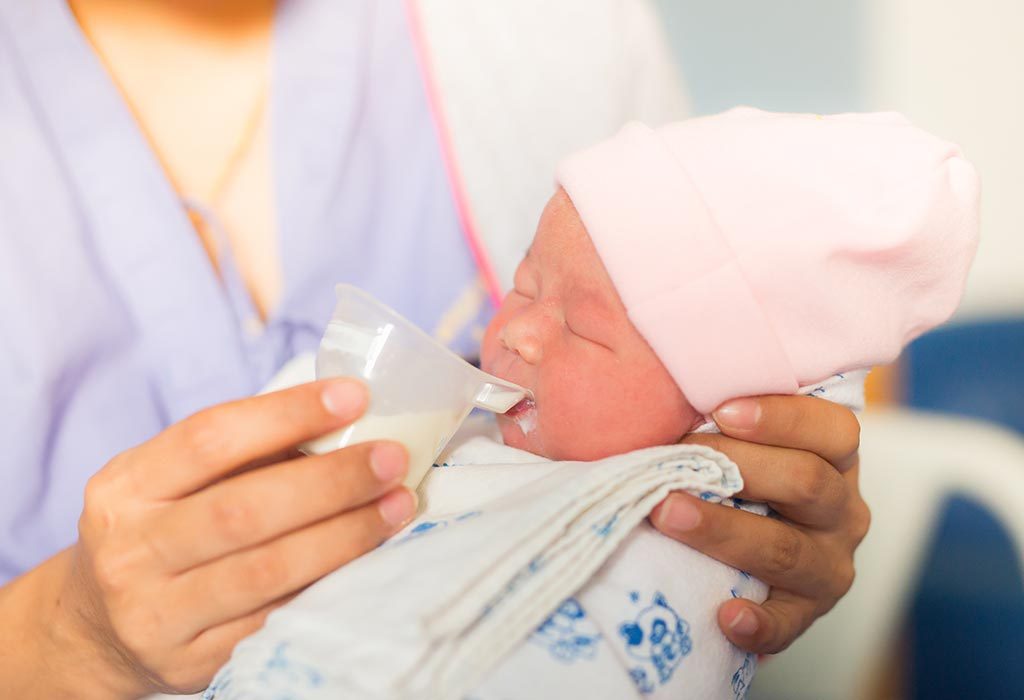 Cup feeding is an effective alternative feeding method to feed a breastfed or bottle-fed baby. It is especially useful for feeding premature babies and when mothers are unable to breastfeed. Cup feeding is not new and has been used for hundreds of years by women around the world.

Video : Cup Feeding a Baby – When Is It Needed and How to Do It?

What Is Cup Feeding?

Cup feeding, as the name suggests is a method to feed the baby using a cup. Any cup that can hold milk will do, be it your teacup, the cap that covers the feeding bottle, a shot glass or a plain cup. With the baby seated in an upright position, the cup is filled just enough to let him take sips of the milk comfortably. The World Health Organisation’s recommendation on infant feeding suggests cup feeding to be a better method than feeding with a bottle and teat.

While cup-feeding is suitable for any baby, it is recommended only in the case that breastfeeding is not possible (because breastfeeding by itself offers a lot of benefits). Consider cup feeding in the following situations:

Benefits of Cup Feeding Your Infant

Here are some reasons why cup feeding your infant would be a good idea (as compared to bottle-feeding):

1. Cup-Feeding Does Not Interfere With Direct Breastfeeding

One of the biggest advantages of cup feeding is that it avoids nipple confusion in babies. Nipple confusion happens when babies are introduced to artificial teats from bottles. Since artificial teats use a different sucking mechanism that requires less effort when compared to breasts, babies might reject breast and jeopardize the breastfeeding relationship.

2. Cup Feeding Prevents Misalignment of Teeth and Abnormal Development of the Jaws

Feeding bottles are known to alter the way teeth and jaws develop in babies. The different sucking mechanism from artificial teats can cause misalignment of the teeth as the babies grow. This has repercussions in the form of the poor performance of oral functions such as speech, eating and breathing. Cup feeding can prevent these misalignments and prevent abnormal development.

3. It Is Safer and Helps Reduce Dental Caries

All teething babies like to bite and gnaw. The artificial nipples on the bottles are great for gnawing on, and sometimes parents find that their babies would have bitten off a piece of the nipple. This can be dangerous as the piece is a choking hazard. It is also seen that bottle-feeding can lead to tooth decay in babies who have their growing teeth soaked on the artificial nipples.

Although it is easy to learn, cup feeding requires more effort on the part of the baby to get milk. When feeding, you will have to bring the cup to the baby’s mouth and tilt it up until the milk touches the lip and let the baby lap it using his tongue into the mouth. This prevents overfeeding as opposed to bottle feeding which drips milk into the mouth. It is beneficial for the babies as they can better regulate their intake and feed only as much as they need and avoid force-feeding. Some feeding cups are also graduated, so you can measure the exact quantity of milk you want to feed your baby with. 5. Eliminates the Need for Special Cup Training in the Future

All babies will eventually have to grow up and learn to use a cup. This is one task that’s no hurdle to cup-fed babies as they can effortlessly drink from training or sippy cups.

Feeding on cups eliminates having to buy expensive feeding bottles and teats. Cups are also easy to clean, maintain, and carry around.

How to Cup Feed a Baby

Cup feeding is best taught by a healthcare professional through a demonstration, therefore, consult them before you begin. Also, ensure your baby is awake and alert and in an upright position when you cup feed him. Never pour milk in their mouth or feed a baby who is lying flat on the back.

Here is how to cup feed a breastfed baby:

Disadvantages of Cup Feeding Your Child

Cup feeding a baby has disadvantages too, find out what they are before you cup feed your baby.

Transitioning From Cup Feeding to Breastfeeding

Transitioning from the cup to breast depends on why you started cup feeding in the first place. Occasional cup feeds between successful breastfeeds is just fine. However, if you’re using the cup because your baby doesn’t take the breast, then you will have to work to breastfeed them. This transitioning might also be necessary for weaker babies (low birth-weight babies, preemies, etc.) who had to start with cup-feeding before they gained the strength to be able to breastfeed. Offer them the breast before every cup feed, and offer it in between the cup feeds (or at any time the baby seems interested). Once they begin taking the breast, cup feeding can be done in case they want a little more milk.

If you want to try other methods of feeding your baby, here are some options:

Cup feeding is an excellent alternative to breastfeeding in babies and can be tried after consulting with a doctor.