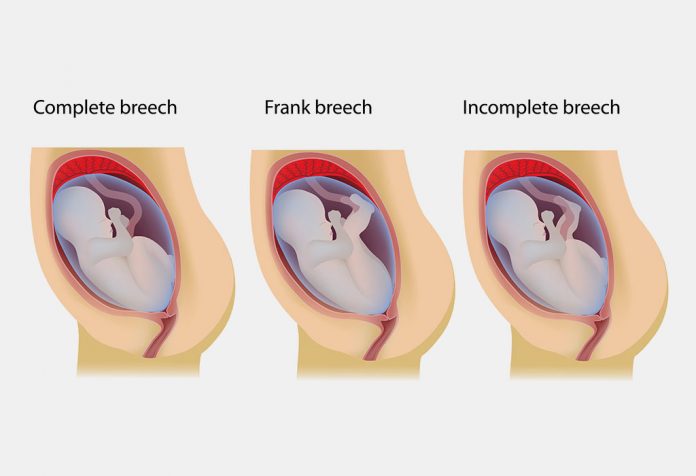 Do breech babies have birth defects? This is a question most parents ask when their own baby is declared to be in the breech position prior to delivery. The optimal position of the baby’s delivery is out the mother’s vagina, headfirst, followed by the rest of the body. However, there are instances when the baby is positioned in such a way that his feet, as opposed to the head, point towards the birth canal. This causes the child to emerge out with its feet or buttocks first. This poses numerous risks to the child’s survival, which might also result in birth defects.

What Rate of Breech Babies Have Birth Defects?

Less than 5% of pregnancies end up with breech babies. On trying to understand what percentage of breech babies have birth defects, you will find a lot of statistical data that points towards the probability of such babies having congenital conditions after delivery. In a nutshell, the probability is quite low. the risk may be low but the chances of abnormalities do exist. The causes of breech baby birth defects vary widely. A breech position can cause the oxygen supply to get cut off prior to delivery or cause damage to the physical body of the baby. These causes can result in a range of birth-related issues, some of which have the ability to be fatal for the newborn as well. Some of the major ones are listed below.

1. A Possibility of Fetal Distress

Being in a breech position, a baby can experience fetal distress. The breech position of the baby increases the probability of the umbilical cord being compressed as the baby travels down the birth canal. At times, this can even cause a cord prolapse to occur. When this happens, the oxygen supply that the baby receives through the cord gets interrupted and may remain that way throughout the birth process. Since the brain is heavily dependent on oxygen, not having enough for an increased period of time can hamper its functioning and have long-term consequences. Fetal distress is an emergency complication where a baby is deprived of oxygen. As per studies, fetal distress can also increase the risk of autism in babies.

A breech baby may also experience delayed growth and development. There is yet a conclusive link to be established between the breech birth and the condition, but there are chances that indicate it. In a normal child, 23 pairs of chromosomes are formed together, from the chromosomes received from both the mother and the father. In certain cases, a child may have an extra chromosome that stays unpaired, which is known to cause this condition. As of today, there doesn’t seem to be any methodology that can prevent Down’s syndrome. As mentioned above, there’s no study to prove that breech birth can lead to Down’s syndrome, but 1 in 10 breech babies has mild to a moderate neurological issue.

Having an extra chromosome from the usual 46 may lead to Down’s syndrome in the child. However, there are numerous other conditions that can plague the child if the chromosomal structure is not as it should be, or if the pairing is incorrect. A higher risk of heart problem can cause a baby to be in the breech position.

The headfirst position also has its advantages since it poses the lowest risk of damaging any other parts of the baby’s body. The skull can withstand the initial pressure, whereas other parts of the body are still developing. One such region is the spinal cord, which ends up bearing the highest pressure when the baby is in the breech position. This results in higher chances of deformities in the spinal cord, muscle coordination problems, or further complications in the child’s growth.

How to Prevent Breech Birth Defects

Whether the baby is born in a complete breech position or a frank breech position, birth defects in the baby can be prevented by one and only one solution – changing the baby’s position prior to birth. This can be carried out in different ways.

This is a method practised by doctors. The mother is given medication that calms the uterus and doesn’t start untoward contractions. Then, a professional physician gently rotating the baby in the other direction. However, this method is not practised anymore.

In certain cases, doctors recommend seeing a chiropractor. They tend to have certain techniques that are used on pregnant women, which calm the uterus and create a movement that encourages the baby to shift on his own. However, chiropractic techniques are not followed in India.

In a breech baby, a birth defect in the legs or hands, or the development of mental conditions have a higher chance of occurring as compared to other babies. However, medicine has reached a stage where it can combat the problem. By detecting the breech position early and undertaking methods to correct it, you can have a safe and happy pregnancy and a fully developed baby, free of any problems.

What It’s Like To Be a Pregnant Millennial- Trust Me, You’ll Relate to This

Screen Time – Is the Fun Worth It for Our Babies/Toddlers?