Home Baby Health Babinski (Plantar) Reflex in Babies – Causes, Signs, and When to Be... 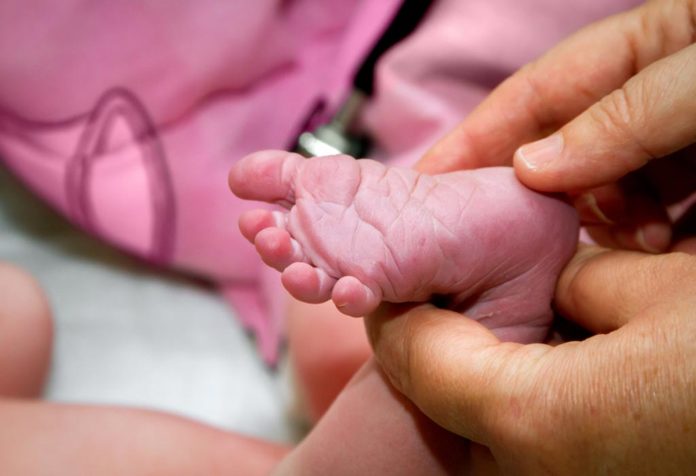 Identified by a French neurologist, Joseph Babinski, in the 19th century, Babinski reflex in newborn babies is also called Babinski sign or response. The medical term for this is the Plantar reflex. The Babinski or plantar reflex occurs when the sole of the baby’s feet is gently stroked. The feet are stroked from the heel to the toe’s base and on the lateral and outer sides of the feet. In response to the stroking, the big toe moves upwards while the remaining toes fan out. This reflex is seen at birth and stays up to 24 months. As a parent, it is essential to know such information to decide whether medical assistance is necessary or as the first diagnosis of any possible issue.

What Is Babinski Reflex and When Does It Occur?

The Babinski reflex is a reflex of the foot that happens in babies and young children. Generally tested by doctors, by stroking the sole, it is an essential tool the medical fraternity uses to ensure child activity in the brain, neurological responses, and nerve function are normal. It is a natural reflex that babies display when their foot sole is stroked, and their big toe bends upwards to the top of the foot while the other toes spread or flare out from one another.

The reflex is often tested with other natural reflexes to check for any neurological abnormalities. Some of the other reflex tests are:

Babinski reflex in infants is normal until the age of 2. The following are some typical timelines of its occurrence:

How to Check the Presence of Babinski Reflex?

The Babinski reflex is something that doctors check during routine visits to rule out any abnormality. While the doctors have their set of tools to test it, one can do it at home. As a parent, follow the instructions below to check for positive Babinski signs:

Hold the newborn’s feet and gently stroke the sole starting from the heel to the base of the large toe with your finger. The big toe will move upwards or in the top direction, while the other toes will spread out.

With the help of an object like a key or reflex hammer, the doctor will strokes the bottom of the foot from the heel to the base of the big toe.

3. Scraping an object along the foot sole

The doctor may scrape the object slowly at the bottom of the foot to get the baby to feel a gentle tickle.

Single-use testing kits are used as an alternative to reflex hammers. Using these test kits on the baby’s foot can also help in checking the same.

5. Gently sticking object in the center of the sole

Sticking a long stick into the toe blades can also help in checking for Babinski Reflex.

Symptoms for Babinski may mirror the symptoms of a ticklish foot. So, the doctor may conduct further tests to test whether it is indeed a case of Babinski Reflex.

If Babinski reflex is prevalent in children older than two years, it indicates a lack of integration in the corticospinal tract. Absent plantar reflex causes include tumors or injuries in the brain or spinal cord. If the corticospinal tract is well-integrated, the developed cells subdue the reflex in older children and adults. The presence of the Babinski reflex indicates damaged nerve cells in the tract, and the most general causes for an abnormal reflex are:

A properly administered Babinski test will reveal a “positive or negative Babinski sign.” A sign of a healthy baby is the big toe pointing up and the other toes flaring up. The Babinski reflex remains until the baby matures.

The Babinski reflex is the indicator of the health of a normal cortical spinal tract. The corticospinal tract is the nerve channel that transmits information between the brain, limbs, and body. It is responsible for the motor control function of the body and limbs.

When Does Babinski Reflex Stop?

About 60%-75% of newborns have the Babinski reflex as their nervous system develops after they are born. The reflex may not necessarily mean a neurological condition.

What Is Abnormal Babinski Reflex and Why It Happens?

An abnormal Babinski reflex in children over two years of age indicates a lack of integration in the corticospinal tract. A well-developed corticospinal tract could be able to subdue the reflex in older adults and children. There could be a possibility of damaged nerve cells if the reflex persists in children over two years. A few conditions that could cause an abnormal Babinski reflex are:

When Do You Need to See a Doctor?

If your baby shows a Babinski reflex after the age of two, then you may need to see a doctor. A pediatrician will be able to confirm if there is an underlying condition. If your child does not have any other developmental delays, it could just be a delay in integrating reflexes. The doctor may wait for a few weeks before confirming the same. If the reflex persists or the baby shows signs of neurological dysfunction, the doctor may conduct relevant tests to ascertain the possible underlying cause.

A very common reflex in children, the Babinski reflex, occurs because of a specific stimulus. Often checked by doctors to ascertain the child’s central nervous system, it tends to disappear by age two. It is advisable to get a physical examination for your child to check for any nervous disorders or neurological complications. If your doctor suspects an abnormal reflex, they may refer you to a specialist. Some conditions in children could display an abnormal Babinski reflex that cannot be cured. The causes for an abnormal reflex could be many, but early diagnosis of the symptoms could help in the treatment. Also, making appropriate changes to one’s lifestyle might help.

Frantic Moms Beware! Are you Raising an Anxious Child?

10 Side Effects of Weight Loss That Nobody Tells You

My Journey From Conceiving to Childbirth

Are You a Pushover Parent?