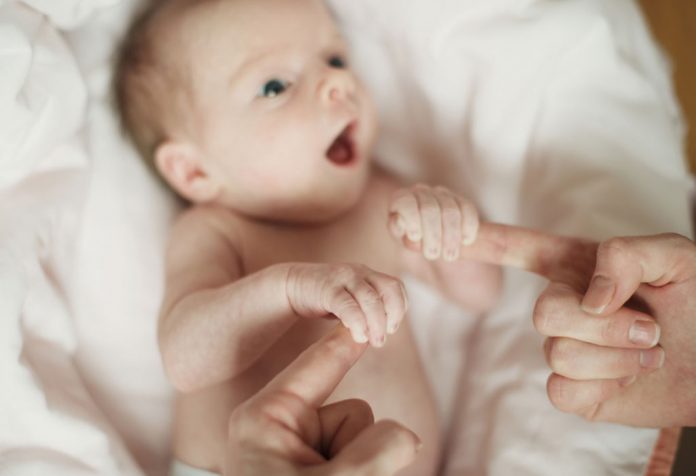 Newborn babies can exercise very little control over their bodies. Nature, therefore, equips them with certain survival skills. One of these is reflex. Baby reflexes at birth can be defined as involuntary actions and movements, performed by babies either as part of a usual activity or as a response to external stimuli. These necessary reflexes can cause babies to twitch, kick and jerk seemingly without warning or visible reason, and to some may appear abnormal. However, they are no cause for worry as they indicate that the baby’s brain and nervous system are developing normally. Most of these reflexes are temporary and will disappear as the baby grows.

Which Reflexes Should Be Present in Your Newborn Baby?

Given below are the newborn reflexes list with names and some details of common infant reflexes found in newborn babies.

Root reflex is a basic survival instinct that helps the baby to latch on to the mother’s breast and feed. This reflex is very helpful for nursing moms.

Upon stroking the side of the cheek, the baby will turn his head in the direction of the touch and open his mouth to feed.

This reflex only remains for the first four months.

The Moro reflex is also known as the startle reflex as it occurs when the baby is startled. This reflex only remains for the first two months.

Tonic neck reflex is when the baby responds by stretching his hands when his neck is turned to one direction, there is no known explanation for this reflex. Gently turn the baby’s head to one side and observe that they will stretch out their hands on the same side and bend the opposite arm from the elbow.

This reflex only remains for the first four to five months.

Righting reflex is a precautionary reflex and is a natural way for the baby to protect itself. Drop a blanket over the baby’s head while it is sleeping. You will observe that the baby will shake its head, hands and legs till the blanket falls off.

This reflex only remains for the first year until the muscles have matured to exercise sufficient control.

Withdrawal reflex is another precautionary reflex and is a natural way for the baby to avoid colliding with any object. When your baby is sitting, suddenly move your face close to his, you will notice that the baby will turn his head away. He would do the same if an object suddenly moves closer to him.

This reflex will remain for life.

Again a precautionary reflex and is a natural way for the baby to avoid choking on food or swallowing a small object. Gently touch a small spoon to the tip of the baby’s tongue. You will observe that the baby will push it back out.

This reflex will remain the first four to six months.

Grasp reflex is the baby’s way of holding on to its mother. Gently rub the baby’s open palm with your finger, and it will immediately grasp your finger.

This reflex will gradually go after the third month.

The baby’s attempt at walking is known as the stepping reflex. Hold the baby in the air with his legs dangling and then gently bring him down till its feet begin to touch the floor, you will notice that the baby will put one foot forward as if trying to walk.

This reflex will remain for the first two months.

As mentioned earlier in this article, reflexes are natural in newborn babies and are a sign that the baby is developing normally, these awkward reflexes will disappear with time.

Is It Safe to Go Boating During Pregnancy?

Diaper Rash Troubling Your Little One? Here’s What You Can Do!

Shweta Tiwari’s Daughter’s Emotional Letter For Her Baby Brother Will Have You Reaching For The Tissue Box!

How to Make Your Fussy Toddler Eat Healthy and Nutritious Food