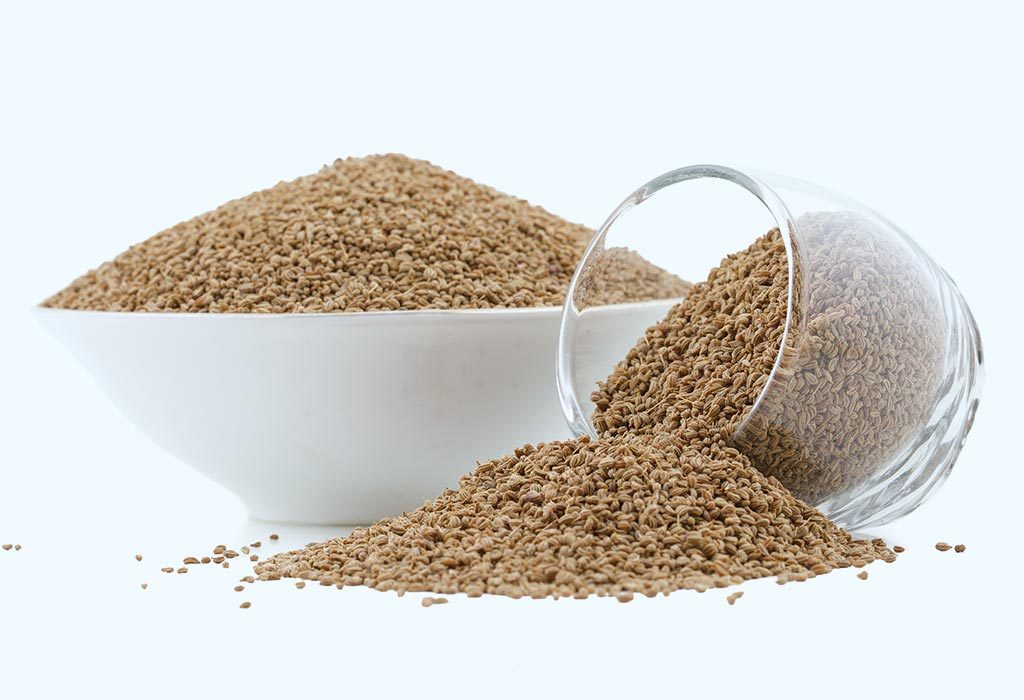 Ajwain (carom seeds), also known as ‘bishop’s weed’ or ‘thymol seeds’ has its place in the same family as dill, anise, and fennel. Ajwain is a regularly used spice in the preparation of most Indian dishes because of its flavouring and curative properties. Ajwain seeds, when eaten raw, may taste bitter or spicy. Therefore, they are usually used in tadkas.

Video : Is It Safe to Eat Ajwain (Carom Seeds) During Pregnancy

Ajwain is known for its medicinal properties. Rich in antioxidants, minerals and fibre, eating ajwain helps ease gas and other digestive issues. Eating ajwain also increases appetite by enhancing digestion. Ajwain is also beneficial for the proper functioning of the kidneys and the respiratory system. Thus, pregnant women can also benefit from eating ajwain during pregnancy.

Is It Safe to Eat Ajwain When Pregnant?

Eating ajwain in the right quantity during pregnancy is usually considered safe. However, care should be taken to eat it in moderation. If you cannot eat ajwain seeds in their raw form, you can soak them in water and consume the ajwain water.

Reasons to Eat Ajwain During Pregnancy

Eating ajwain during pregnancy can prove useful in the following ways:

Many pregnant women experience bloating, flatulence, acidity, and indigestion owing to the growing uterus which can slacken the digestive process. Ajwain contains thymol which can speed up digestion, improve the overall health of the gut, and provide relief from stomach disorders.

Eating ajwain during pregnancy can cure a cold and cough and eliminate phlegm.

Studies have been conducted to show that ajwain also helps reduce bad cholesterol and triglyceride levels, and increasing the levels of good cholesterol (HDL).

Ajwain seeds also have incredible anti-bacterial and anti-fungal properties, and their active compounds help fight against the growth of bacteria such as salmonella and E.coli, which are primarily responsible for food poisoning. Aside from that, ajwain also is beneficial for people who have problems with inflammation.

Are There Any Side-Effects of Ajwain Consumption?

It is sensible to consume ajwain in the right amount during pregnancy in order to extract the full benefits. However, eating it in excessive quantities can trigger certain side-effects. Consuming ajwain in excess during pregnancy can intensify heat in the body, which may negatively impact the pregnancy. Eating ajwain in larger quantities when pregnant may also cause dizziness and increase nausea.

Including Ajwain in Your Pregnancy Diet

You can include ajwain in your pregnancy diet directly as seeds, in powdered form, or in the form of ajwain water. Most pregnant women may prefer drinking ajwain water during pregnancy as it is easier to consume.

During pregnancy, it is important to consume ajwain in the right quantities. However, in case of any lingering doubts, it is always wise to consult your doctor before including ajwain in your diet.

Previous article « Baby Moves or Kicks in the Night During Pregnancy– Is it Safe?
Next article 10 Best Brain-Boosting Puzzles for Kids »