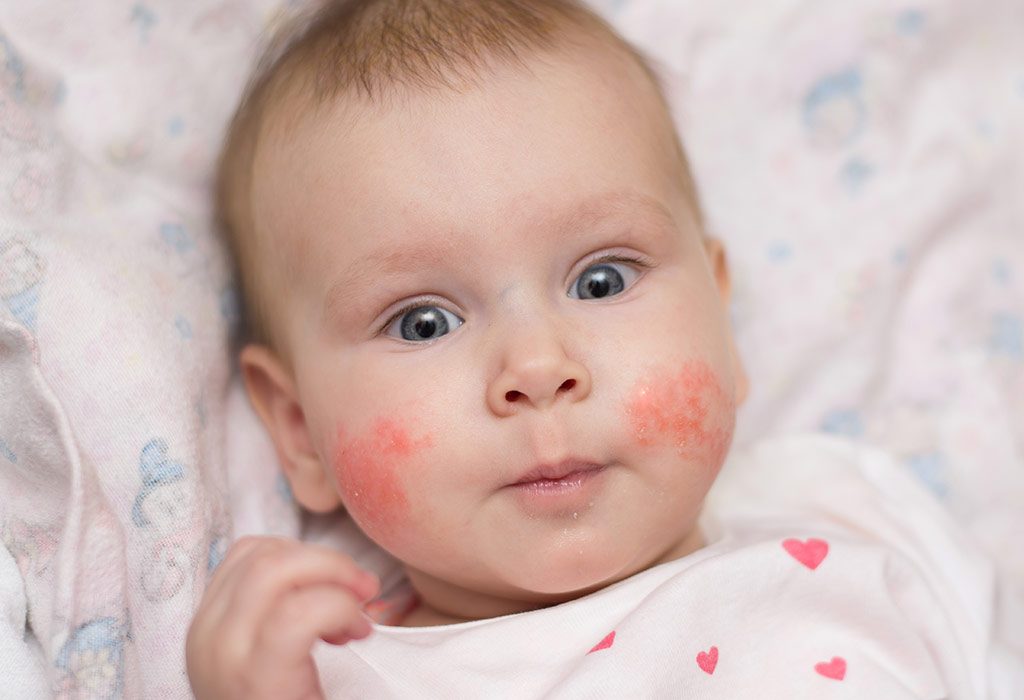 If you’ve noticed your little one’s cheeks suddenly turning red, due to what appears to be a rash, it Is highly likely that he may be having Fifth Disease. Slapped cheek disease (also known as the fifth disease) is a common childhood skin infection caused by a viral agent Parvovirus B19. It appears as a typical rash on the cheeks, which is often bright red.

What is Slapped Cheek Syndrome or Fifth Disease?

Fifth disease is a viral infection that manifests with a typical rash (exanthem). It is the synonym for erythema infectiosum, also famously known as the “slapped cheek” disease. The reason it is known by the name of ‘fifth disease’ is because it ranks fifth in a group of five-rash conditions, which includes scarlet fever, measles, rubella and roseola, followed by the slapped cheek syndrome. It is a contagious disease and may spread from one infected child to another through nasal and throat secretions, and also infected blood.

Causes of Slapped Cheek Syndrome in Babies and Toddlers Parvovirus B19 (fifth virus) is the agent responsible for this disease. It is present in nasal and throat secretions or droplets of an infected patient. It spreads in a way similar to the usual flu or colds. A baby may contract the disease due to:

It is important to remember that the slapped cheek disease is contagious or infectious only before the rash appears.

Symptoms of Slapped Cheek Syndrome in a Child

The symptoms of this disease usually manifest 1-2 weeks after the disease is contracted. This is called the slapped cheek incubation period. Mild constitutional symptoms like low-grade fever (slap cheek fever), throat irritation and running nose might be the symptoms in the week preceding the rash. However, this is the most infective phase of the disease.

The most typical symptom of this disease is a rash that usually occurs on the fifth day after the dormant phase of the virus. It usually appears on the cheeks first and is bright red. It may spread to the limbs and trunk, and be present for about 3-4 days before disappearing. Sunlight exposure, hot and cold temperatures, or local trauma may make the slapped cheek rash more prominent.

In some cases, the baby may not have all the above-stated symptoms. He may just seem fine and have only red rashes on his cheeks.

Yes, the disease is contagious, as it can spread from one infected child to another through close contact, and nasal or throat secretions transfer in the form of droplets or shared handkerchiefs, etc. It is most infectious in the week preceding the rash, but it is usually non-infective once the rash appears.

How is Fifth Disease Diagnosed?

The diagnosis of fifth disease is purely clinical. A good history of the symptoms with their occurrence and duration, along with a detailed physical examination including inspection of the rash, can help clinch the diagnosis in most cases. In a few cases, certain blood tests like immunoglobulin levels might be required for confirming the diagnosis of red slap cheek syndrome.

How is Fifth Disease Treated in Young Children?

Generally, all viral diseases, including fifth disease, neither have nor require any specific treatments, as they show spontaneous recovery. Slap cheek treatment involves basic supportive care and includes anti-histaminic drugs for itching over the rash and an anti-inflammatory to relieve the myalgias (muscle aches) and joint pains along with fevers.

Alternatively, you can take the following steps that can ease the condition: Children suffering from chronic diseases or immune-deficient states like sickle-cell disease or thalassemia may require injectable immunoglobulin treatments to effectively battle the infection. A few patients with severe anaemia might require blood transfusions.

Usually, residual myalgias and mild joint pains, that barely require any treatment, are the only complications that have been reported. Rarely, the illness may pose a serious risk in the following cases:

When to See a Doctor for Slapped Cheek Syndrome

You should consult your doctor if your baby develops mild continuous fever, listlessness, doesn’t feed well, cries excessively or gets a rash anywhere on the body. If your little one is under three months and has a fever of about 100.4 degrees or if he is under six months and has a fever of around 102.2 degrees, which refuses to go down, it is time to seek some help!

No specific vaccine is available for the fifth disease, and since it is most infectious before an obvious rash appears, it is practically difficult to prevent the disease. However, ensuring good hygienic habits like frequent hand washing and regular medical checkups can help protect against the infection.

Usually, healthy pregnant women are not easily infected by this virus. However, a mild to moderate infection may occur. The disease may be serious if it occurs during the first trimester of the pregnancy. Special medical attention is required if you notice a rash, or have frequent constitutional symptoms of fever and myalgias or have been in close contact with a patient of the fifth disease. Blood tests may reveal if you have been previously infected, which makes you immune to further infections. If not managed in time, it may cause miscarriage and stillbirths in a few rare cases. It may also affect your foetus, causing growth retardation and a certain type of anaemia.

Slapped cheek syndrome is a viral disease that appears as a typical red rash over cheeks around the fifth day of illness once the constitutional symptoms subside. It is contagious and may spread through nasal secretions. The treatment includes rest and supportive care. If your little one has been infected, don’t panic. Simply take the right measures and he will recover in no time!