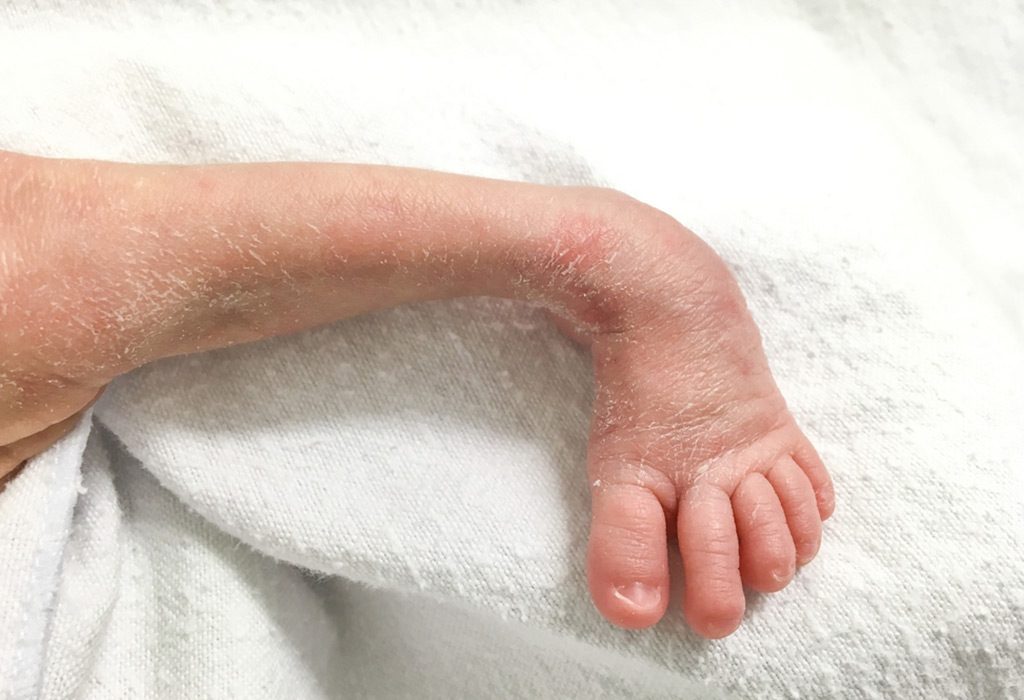 The development of a baby is dependent on multiple factors, such as the nourishment received from the mother, physical health of the mother, and of course, genes. Certain genes passed from mother to baby can result in the baby being born with congenital disabilities. Clubfoot is one such congenital malformation.

Clubfoot, or congenital talipes equinovarus, is a congenital foot deformity, where the baby’s foot is twisted because the tissues that connect the muscle to the bones are shorter than usual. A child can be born with the condition in a single foot, or with a bilateral clubfoot, where both feet of the baby are twisted inwards.

Clubfoot can be mild or severe, and will make walking normally difficult for the child. A clubfoot is not painful, and can be treated early after birth without any complex surgical procedures in most cases.

How Common Is Clubfoot in Babies?

Clubfoot is not very uncommon, and affects one to two in every 1,000 babies born in India. Clubfoot occurrences are more common in boys than in girls, and the likelihood of both feet suffering from clubfoot is high.

A congenital defect, clubfoot can be of three types:

Idiopathic or isolated clubfoot is the most common form of clubfoot deformity that is prevalent at the time of birth of a child. This type of clubfoot affects one to four babies out of 1,000 live births. This deformity is characterised by a stiff and rigid foot, and is very difficult to manipulate. If left untreated, it can have an adverse effect on the child’s life.

The feet in positional clubfoot are much more flexible than in idiopathic clubfoot. This type of clubfoot is caused if the baby is in breech position while in the uterus. Positional clubfoot can be treated and changed to a neutral position by hand.

Syndrome clubfoot is a severe condition where the chances of treatment with positive outcomes are low. This condition can often be part of a broader, more complicated syndrome.

Causes of Clubfoot in Babies

Clubfoot can be caused due to several reasons, and one exact factor or reason cannot be determined. Following are the factors which may lead to this condition:

The likelihood of a baby having clubfoot is higher if either of the parents or other siblings born into the family have had this condition, or there is a family history of this congenital malformation.

Smoking during pregnancy, or using recreational drugs, can increase the risk of clubfoot occurring in your baby.

Clubfoot can also be associated with abnormalities of the skeleton present at birth, such as spina bifida. In this condition, the tissue surrounding the spinal cord does not close properly, leading to a severe congenital disability.

4. Lack of Amniotic Fluid in the Womb

Insufficient amniotic fluid, which surrounds the baby in the womb, can also lead to clubfoot.

Signs & Symptoms of Clubfoot in Babies Clubfoot, unlike many other prenatal conditions, is clearly visible upon the birth of the baby. It can also be seen during the prenatal ultrasound tests. Following are the symptoms of clubfoot:

Though this condition does not cause any pain to the baby, if not treated on time, the symptoms become more obvious and hinder the growth of the child, and restrict free and agile movement.

Diagnosis of Clubfoot in Infants

Clubfoot in some cases can be identified clearly during the prenatal ultrasound test performed before the birth of the child. While nothing can be done to correct the defect before birth, it will give a head start to the doctors to understand the condition better and treat it immediately after birth.

Clubfoot is visible at birth, and the doctor can identify it by just looking at the shape of the baby’s foot. At times, the doctor might opt for an X-ray to understand the severity of the condition before taking necessary steps to treat it.

Risks & Complications of Clubfoot in Babies

Clubfoot is not painful, and does not cause any problem until the child starts to stand and walk. However, the child might face the following complications even if the condition is treated:

Clubfoot can cause serious complications if not treated on time, such as: The treatment of the condition depends on the doctor’s assessment of the severity of the situation. Here are a few remedial actions which may be adopted:

The most common method of treating clubfoot in babies is the Ponseti method. It involves stretching and casting of the affected foot.

In this method, the doctor moves the foot to the proper position and puts it in a cast to keep it in place. This method of repositioning and recasting will be repeated once or twice a week, and this exercise will continue for several months. Towards the end of this process, the doctor will perform a minor surgery to strengthen and elongate the Achilles tendon.

Many times, this procedure is not successful, because the braces are not used for the required period. It is important to follow your doctor’s directions, so that the foot does not return to its original position.

The French method is a nonsurgical method used to treat clubfoot, which involves stretching, mobilising, and taping of the foot to maintain and improve the range of motion of the foot. This method is also known as the functional method, or the physical therapy method, and is useful when performed soon after the birth of the child. The stretching and taping are performed for at least three months, to improve dorsiflexion of the ankle. Dorsiflexion is the angle between the foot and the leg when one walks on the heels. Achilles tenotomy, which involves cutting the Achilles tendon, will be required.

Invasive surgery may be required in the case of a severe clubfoot condition that does not respond to non-surgical treatments. During the surgery, the tendons of the leg are lengthened to allow the foot to ease into a better position. Post-surgery, the affected foot will be cast for two months, and the child will need to wear a brace for at least one year after the surgery. This is done to prevent the clubfoot from coming back.

Even after the clubfoot has been treated, it might not be corrected completely. However, most babies who are treated in the early stages grow up to wear normal shoes, and lead a normal and active life.

How Can Clubfoot Be Prevented?

Since the exact cause of clubfoot cannot be known, it is often difficult to prevent it. The risk of clubfoot can be minimised by not smoking during pregnancy, and avoiding the consumption of recreational drugs.

When Should You Visit a Doctor?

If a baby is diagnosed or born with talipes equinovarus (clubfoot), it is important to visit a specialist who can treat the condition immediately after the birth of the baby. The specialist, with the help of clubfoot radiology, will identify the severity of the condition and the kind of treatment it warrants. After the birth of the child, the sooner the clubfoot surgery is performed, the higher are the chances of the baby being able to lead a normal and active life. Non-surgical treatments such as Ponseti and French methods are most effective, when started immediately after the birth of the child.

If the condition is identified during the prenatal ultrasound itself, then it is best to consult a specialist immediately, so that the situation can be closely monitored, and the treatment can begin immediately after the baby is born.

Is almost impossible to prevent the occurrence of clubfoot. Thus, it is best to be alert, and consult a doctor immediately after the condition has been identified in the baby.

Although clubfoot is not painful, it will restrict the baby from leading a normal life in the future, and hence, the condition cannot be taken lightly. Another critical thing to keep in mind is that even after the condition has been treated, necessary precautions such as wearing special shoes and braces as per the instructions of the doctor must be followed, to ensure that the condition does not re-surface.