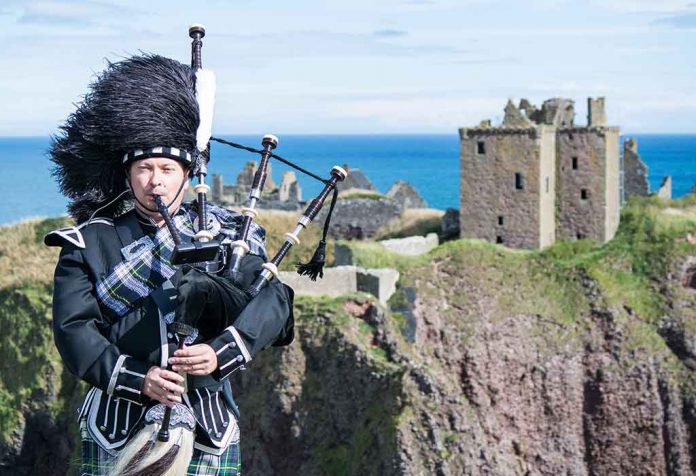 The family names in Scotland have really interesting meanings.

This is a habitational surname that refers to a place called Fife in Scotland. The word means ‘the confluence of rivers at a bend’.

The last name is derived from the Hebrew word Adam, which means ‘man’.

It is a very popular surname indeed. The surname means the ‘protector of the mankind’.

This is a surname that has been derived from an old Gaelic word which means ‘rock’. The name means ‘little rock’.

The name is Greek, and means ‘the son of Andrew’. This surname means somebody who is masculine.

This surname is a short version of Archibald. The name means ‘holy and bold prince’.

This old Celtic name means ‘a strong king’ or ‘a king/man who is as strong as a bear’.

This is a common Scottish surname; it means ‘red earth’.

This Scottish surname is a Gaelic habitational surname, which means ‘height’ or ‘lofty’.

This occupational surname has a French origin,  and it means ‘those who make arms’.

This is a habitational surname in Scotland that originated from Old English. It means ‘birch-wood’.

This is another occupational surname for people who used to make bells or ring bells at the Church. This last name originated from the Middle English word ‘belle’, which has the same meaning.

This is a surname derived from the Middle English word ‘blake’. It refers to those who have dark coloured hair or have a dark complexion.

Blackwood is a habitational surname and is given to those people who originate from the Blackwood region of Scotland.

This Scottish last name is derived from the Old French word which means ‘wood’. This surname is mainly bestowed upon a family that used to live near the woods.

This surname is derived from a Gaelic word ‘bran’, which means a ‘raven’.

This is another habitational name which generally demarks people who belong to the place called Braid in South Edinburgh.

This surname is frequently available among the English and Scottish. The name refers to people who have brown hair or near dark complexion.

Burns is the last name that is mostly borne by people who originate from a place near the stream. The name is derived from the Old English word ‘burne’ which means ‘stream’.

This habitational last name is most popular among people from North Yorkshire.

It is an occupational surname which has been derived from an Anglo-Norman French word ‘banere’, which means ‘flag bearer’.

This is one of the famous Scottish last names that derived from a Gaelic phrase ‘ cam beul’. It means ‘crooked mouth’.

This surname originates from another Gaelic word ‘carn’, and it means a ‘heap of rough stones’.

There was a region called Cunningham in Scotland and this surname was given to the people who belonged to that place.

This surname is originated in the Old English, and it means ‘river crossing’. This last name is mostly borne by people belonging to the Crawford region.

This is another Scottish surname that means ‘rock’ or ‘stone’. Mostly people belonging to a rocky mountain are given this last name.

Christie is a patronymic name that means ‘someone who bears Christ himself’ or ‘son of Christopher’.

This is an Old last name which was bestowed upon people who used to belong to the old Scottish place called Dundemore.

The name literally means ‘son of David’. In Hebrew, the word ‘David’ means ‘beloved’. So, the meaning of the name is ‘beloved son’.

This last name comes from an old Gaelic name ‘Donnchadh’; it means ‘a dark-haired warrior’.

Dickson means ‘the son of Dick’ and ‘Dick’ is the other name of Richard. The word means ‘brave ruler’. So, the name means ‘son of a brave ruler’.

This is another patronymic last name, and it means ‘son of Donald’. The Old Gaelic, Donald means ‘ruler of the world’.

This name is common among the Irish and Scottish people. The last name has a Gaelic origin and means ‘stern’.

Elgin is a place that is situated in the Moray region of Scotland. The people who belong to this place are given this last name.

This surname was given to people belonging to a place called Forbes that is situated close to Aberdeen in Scotland. The meaning of the name is ‘field’.

This surname is derived from a Middle English name which means ‘falcon keeper’. Mostly those who used to own and train falcons were given this name.

This name is another occupational surname that was given to the ‘bird catchers’.

This is a toponymic last name. It was given to the people who belonged to Fala, a region in Scotland.

Findlay has its origin in an Old Gaelic word ‘fionn’ which means a ‘light-skinned warrior’.

Soccer fans will be familiar with this name. Ferguson means ‘son of Fergus’. The Gaelic name means a ‘man of vigour’.

Another last name that made Scotland proud in the field of Cinema is Gibson. This patronymic last name means’ son of Gib’. Gib, a word derived from the Old German word Gilbert, means ‘bright pledge’.

The origin of this last name belongs somewhere in the Norman-French words, and it means ‘tall’.

Another last name that is very famous around the world thanks to the Australian cricketer Adam Gilchrist, who actually belongs to Scotland. The name comes from an Old Gaelic phrase ‘giolla Chriost’, which means ‘servant of Christ.’

This last name finds its origin in the Old English, and it means ‘gravelly homestead.’ This name was mostly given to people who belonged to the Grantham region in England.

Gilmore is a famous last name; it means ‘servant of Mary’.

The surname denotes people having grey hair or beard or clothes.

This is a toponymic surname as it suggests and denotes people who belonged to the Hamilton region. The name means ‘crooked hill’.

This name has an Old Anglo-Norman origin. It means ‘someone with a great heart or spirit’.

This surname already is clearly topographic. It refers to people who belonged to the hillside.

Another known surname amongst soccer lovers, Henderson is a patronymic surname that means ‘son of Hendry’. Originating from old German, the name means ‘ruler of the home’.

This topographic surname has an Old Gaelic origin. The name means ‘island’ and was given to the clan of Innes, in the Moray County in Scotland.

One of the most famous last names Jones has its origin in Scotland. The word is derived from Hebrew and means ‘God is gracious’.

This is another Scottish surname with the same meaning as Jones. The medieval name also means ‘God is gracious’.

This is an Anglicised form of a Gaelic name ‘Mac Eanraig’ and means ‘Son of Henry’. The last name actually means ‘ruler of the home.’

Kelly is another topographic surname denoting people belonging to the Kelly regions in Scotland. The name in Cornish literally means the ‘grove’.

This is also a patronymic surname. It means ‘son of Laurence’.

Made popular all over the world by the famous food chain, McDonald is a Scottish surname that means ‘son of the ruler of the world’.

The origin of this surname lies in Old Gaelic, and it means ‘well-born’.

These were some of the popular as well as rare Scottish surnames with their meanings. Now you know when we suggest a surname, it is just not a name, but a treasure trove of hidden facts of generations gone by and a rich heritage passed down!

50 Baby Names That Means Healer for Girls and Boys

Marriage Does Change You As a Person and These 5 Things Are Proof!