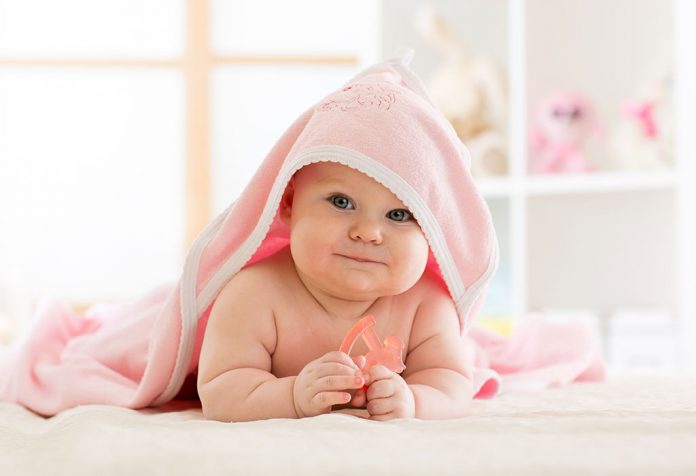 Every baby is different and develops at his own pace at different ages. However, there is an approximate age that is considered to be the basic timeline when most babies start crawling, walking, or teething. This guideline is just for the parents to be prepared for their child’s developmental phase instead of getting anxious if their baby shows signs of growth either late or early. One such sign is teething early, which might put them in a frame of excitement as well as confusion. Therefore, parents need to have enough knowledge about helping their babies transition into this new phase. Let’s take a look at some common questions parents usually have about teething.

Can Babies Start Teething at 3 Months of Age?

Generally, most babies start teething when they are four to six months old. This guideline doesn’t apply to every baby. Some babies don’t start teething until they are a year old, and some might be born with one or two teeth. There are few babies who start teething before they are three months old, but their parents should not worry. There is nothing wrong with a baby teething at 3 months.

Signs of Teething in 3-Month-Old Babies

Most parents expect their babies to teeth when they are around 6 months old, so if their baby has started teething early, they might miss the symptoms. The symptoms of early teething are exactly the same as right-time teething. The common symptoms are:

How Can Early Teething Affect the Mother’s and Baby’s Health?

Early teething can affect the mother’s and the infant’s health in the following ways:

Mothers wonder what will happen to breastfeed when their infant starts teething. The baby bites the breast when breastfeeding. The mothers should gently pull the child away if he bites, and express through words like “no” or “ouch” to reiterate biting is not right. The baby won’t understand immediately, but eventually, he will get the point. Try using the same words and the same tone every time you want to tell him not to bite. If the kid still bites, the mother can pump her milk and store it, to feed it later in a bottle.

Early teething requires parents to take the infant to a paediatric dentist. The doctor would evaluate the health and development of the teething gums of your 3-month-old and will advise on activities and issues that can affect the development.

For good mouth development, parents should keep an eye on the wear and tear of the feeding bottle nipple for the kids who bottle feed or use pacifiers. Teething babies gnaw on the milk bottle nipple or pacifier, and the tip of the nipple can tear away and pose a choking hazard for the baby. Even if the nipple is not noticeably worn, still regular changing is recommended.

How Can Parents Help Ease Their 3-Month-Old Teething Infant’s Discomfort?

Parents often wonder how to comfort their babies when they are teething. Here are some teething remedies parents can use to help ease their teething infant’s discomfort:

Most babies try to chew their hands when they are teething. For an infant who can’t hold objects and put them in his mouth, a teething mitten is a perfect solution. Put a teething mitten on the baby’s hand, and they will chew on it instead of their hand. Teething mittens also provide a sensory stimulation with their bright colours and varied textures.

Hand teethers are small and colourful teething toys. They are specifically shaped and designed to soothe the aching gums of the baby. They are shaped like a hand and are filled with water, or another liquid with fingers made perfectly to let your baby scratch any nook or cranny of their gums. Parents can cool them in the refrigerator to provide extra teething relief to the baby’s swollen gums.

Teething pacifiers are similar to regular pacifiers with a few modifications made for teething babies. They are made with different textures to stimulate the baby’s mouth and soothe their gums. To make them resistant to chewing and biting, they are made of silicone,  a more resistant material.

Parents often wonder if they should start feeding their child solid food as soon as the child starts teething. As a general guideline, babies should not be introduced to solid foods until they are six months old. The three-month-old kid’s belly is not ready for solid food. If you see your kids chew things more due to early teething, provide the kid with safe and hygienic toys to nibble on. Feed the child solid food when he or she is ready or as per the advice of their doctor.

Does Early Teething Mean That the Infant Is Going to be Smart?

Early teething is not a sign of intelligence or smartness. Some babies’ teeth early but like most babies, they too get a full set of 20 primary or ‘milk’ teeth by the age of three. Teething early or on time has no relation to smartness or enhanced development of your baby. When your child gets a tooth or two, be sure to clean the area around the teeth with a soft-bristled toothbrush or a damp washcloth.

Early teething can cause worry in parents of a three-month-old baby. But, you need not get anxious and think of it as something abnormal. Early teething is normal, and the child is developing right. Take care of the infant while he is teething and enjoy the phase.

Factors That Affect Growth and Development in Children

8 Things You Do Differently After Having a Second Child

Importance of Sensory Bins for Infants and Toddlers

Thing to Remember Before Starting Solids to Your Baby