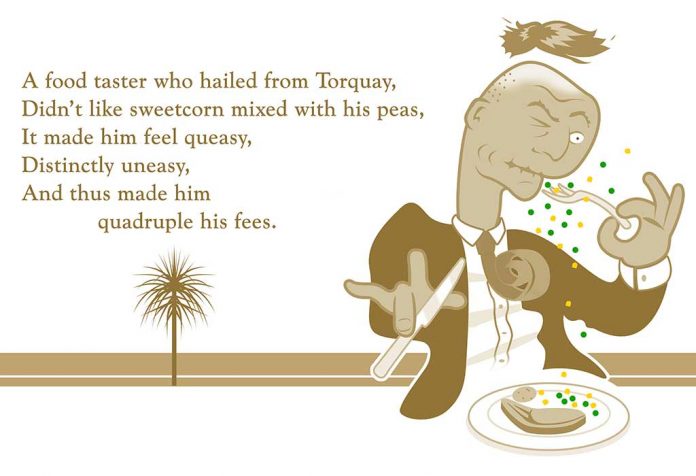 Limericks are funny poems of five lines which are good for having a good laugh for everyone. The silly poems are especially good for the kids, both for reading and making. The creativity of the kids is unleashed as they learn to write rhyming lines and words to form a limerick. Writing witty and funny limericks also makes them use their word knowledge and learn more words to be creative. So it is a good way for parents to develop the creativity of their kid.

What is a Limerick?

A limerick is a funny and short poem of five lines written in a distinctive rhythm. The limerick for kids is easy to understand and with funny lines that attract the kids. The rhythm of a limerick is AABBA where A and B stand for number of words. So the first, second and fifth lines have equal words and third and fourth lines have equal words. Also in a limerick, the first, second and fifth lines are written longer than the third and fourth lines. So the longer lines are A and shorter lines are B. The ‘A’ lines should be of 7-10 words/syllables and B should be 5-7 syllables or words. The kid-friendly limericks are extremely funny and are best for a good laugh.

How to Write a Limerick for Children?

Limericks are five-line silly poems which are easy to write. These funny poems need not really make sense. Limericks were first made famous in the 1800s by Edward Lear in his book “Book of Nonsense”.

The steps to write limericks are:

A limerick has five lines and the first, second and fifth lines have similar rhyming and same syllable count, typically 8 to 9 words. And fourth and fifth have same rhyme and are of 5 to 6 syllables.

To make sure the words and lines rhyme with each other, try singing them or saying them aloud. When we read out aloud we get the feel of rhyme and beat.

Be creative with the words and lines. Don’t think too much about the lines making sense, just go with the flow and keep your focus on rhythm. If get stuck, try the fill-in-the-blanks method, where you can write the lines with the rhyming words missing and then you can fill in to make the limerick.

An ambitious young fellow named Matt
Tried to parachute using his hat.
Folks below looked so small
As he started to fall,
Then got bigger and bigger and SPLAT!
-Graham Lester

There was an old man of Dumbree,
Who taught little owls to drink tea;
For he said, ‘To eat mice,
Is not proper or nice’
That amiable man of Dumbree.
-Edward Lear

A circus performer named Brian
Once smiled as he rode on a lion.
They came back from the ride,
But with Brian inside,
And the smile on the face of the lion.
-Anonymous

The bicycling poodle he saw
Made the cop on the beat drop his jaw;
It was easy to tell
That it rode rather well,
Though its hand signals truly were paw.
-Graham Lester

A mouse in her room woke Miss Dowd
She was frightened, it must be allowed,
Soon a happy thought hit her
To scare off the critter
She sat up in bed and meowed

There was a bold pirate of Boulder
Whose cutlass was slung from his shoulder.
He’d mighty fine notions
Of plundering oceans,
But his mom said: “Perhaps, when you’re older.”
-Graham Lester

There once was a wonderful star
Who thought she would go very far
Until she fell down
And looked like a clown
She knew she would never go far.

There was an Old Man with a beard,
Who said, “It is just as I feared! —
Two Owls and a Hen,
Four Larks and a Wren,
Have all built their nests in my beard.”

Kids will enjoy reading and making funny limericks. These five-line poems are easy to make and will increase the creativity and word power of the kids. So, encourage your kids to create limericks and enjoy laughing with them.

Are You Gonna Have a Boy or a Girl?

It’s the Money, Honey! What Happens When you Outearn Hubby