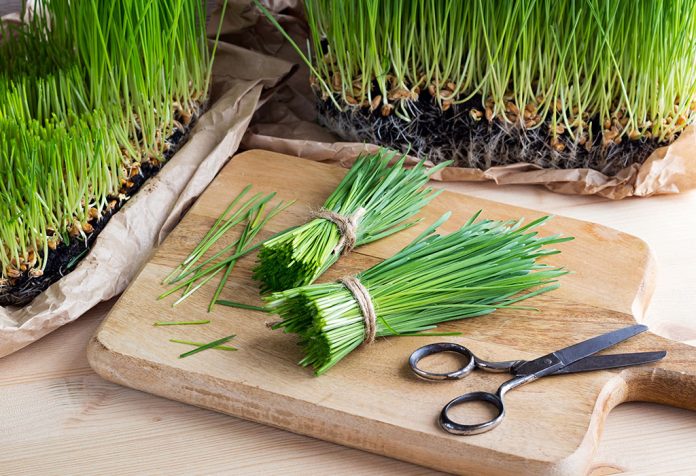 Having nutritious food items and healthy juices are what every pregnant woman looks forward to consuming to ensure good health. Wheatgrass is one of those items that tend to stay on the borderline since many people do not have full clarity on its safety or harmful effects. Let’s find out if wheatgrass is good for pregnancy and what needs to be kept in mind if you do consume it.

Wheatgrass is the leaf-part of the wheat plant, the first few leaves. It is harvested before the wheat has a chance to mature and become brown. It is quite rich in nutrients and most of them are available in a variety of medical stores, usually in the form of nutritional supplements.

A mere 100g of wheatgrass powder has a constitution of its nutritional ingredients as follows:

Is Eating Wheatgrass Safe During Pregnancy?

Given the variety of nutritional benefits, wheatgrass provides, consuming it during pregnancy can help reap a lot of value from it. Although it is pretty safe for a pregnant woman, it is necessary to remember that overdoing it could lead to a ton of complications. Since it is usually eaten raw and it is procured directly from the soil, there is a potential risk of many bacteria, fungi and other microbes being present on the wheatgrass. However, wheatgrass in powder or tablet form may not pose these issues.

Can You Consume Wheatgrass Juice During Pregnancy?

Containing the possibility of a number of blood purification entities, wheatgrass juice could find itself to be quite a great health drink as well. But, in case you haven’t had wheatgrass ever before, most dieticians and doctors do not recommend starting it right in the middle of a pregnancy. Drinking raw juice can be risky and have bacteria, so you must avoid drinking raw wheatgrass juice. Benefits of Wheatgrass During Pregnancy

The presence of a variety of nutritional elements in wheatgrass makes it an important food item that can provide a number of benefits.

Though pregnancy might be connected with a wonderful glow that a mother has, it is usually a result of a good and balanced diet. Wheatgrass helps women get clearer and healthier skin due to its vitamin content.

Wheatgrass contains a good amount of folic acid and iron, which helps in increasing RBCs and thus helps in improving blood circulation.

Issues related to digestion are nearly a daily headache for most pregnant women. Constipation, stomach fullness, diarrhoea are just a few of them. But wheatgrass helps relieve these symptoms quite effectively. Cellulose present in the grass helps clean the colon tract, while the fibre constituents stimulate bowel movement, relieving constipation. Furthermore, wheatgrass is alkaline in nature, which makes it the best remedy to treat stomach acidity.

Wheatgrass is rich in antioxidants. These, when consumed, act upon various free radicals present in the body which can cause unwanted damage to the cells, and flush these toxins out of the system.

Fluctuation in haemoglobin levels is a strong possibility in pregnancy, leading to a reduction in iron content and the onset of anaemia. Wheatgrass kickstarts haemoglobin production again and brings back the capacity to hold the iron in the blood. The growth of the foetus is heavily dependent on the entire spectrum of vitamins and minerals that assist in the development of various organs and bodily functions. Wheatgrass is a rich source of potassium and calcium and Vitamin C and, thus, can provide you with essential nutrients during pregnancy.

The numerous ingredients, combined with amino acids and antimicrobial properties, all work together in providing the body’s immune system with the support it requires. This helps in combating various infections effectively.

Side Effects of Wheatgrass When Pregnant

Every coin has two sides and the benefits of wheatgrass, too, do not come without the potential risk of suffering from its side effects. For a pregnant woman, these are necessary to be kept in mind.

The conditions in which wheatgrass grows, make it a home for various bacteria and fungi to be present on it. Consuming such wheatgrass in its raw form may cause pounding headaches, swelling, and even nausea in some cases. Women having a gluten allergy or suffering from celiac are at a higher risk from it.

Wheatgrass juice and powder that is available in the markets, is usually prepared directly from wheatgrass procured from the farmers. These tend to contain all the microbes and germs present from the soil, which get mixed with the juice. Consuming these could cause numerous infection to plague you and your baby, resulting in a complicated pregnancy. Tips to Keep in Mind

Taking a few precautions can bring about a world of change while consuming wheatgrass.

How to Grow Wheatgrass at Home

Growing wheatgrass is quite a simple process. It begins by germinating high-quality wheat seeds in water for about 48 hours and then planting them in a tray of soil and manure, flattening them properly. Once they have acquired roots, spray a few drops of water regularly until the wheatgrass starts to emerge and, in a couple of weeks, it will be ready to be harvested and used.

Going for wheatgrass juice or wheatgrass powder during pregnancy might seem a healthy choice but that may not always be so. In any case, many nutrients can also be acquired from different food items, too. Keeping a healthy and balanced diet with tiny amounts of wheatgrass is the right way to get the best of both worlds.

Disclaimer: The information given in this article is not intended or implied to be a substitute for professional medical advice, diagnosis, or treatment. There’s no study that proves that intake of wheatgrass during pregnancy can benefit a woman, so we urge readers to seek the advice of a physician with regards to foods and juices they wish to consume during pregnancy.

Life Is Short – Be Supportive and Spend Quality Time Together

Jazz Up your Posture With 5 Simple Exercises!