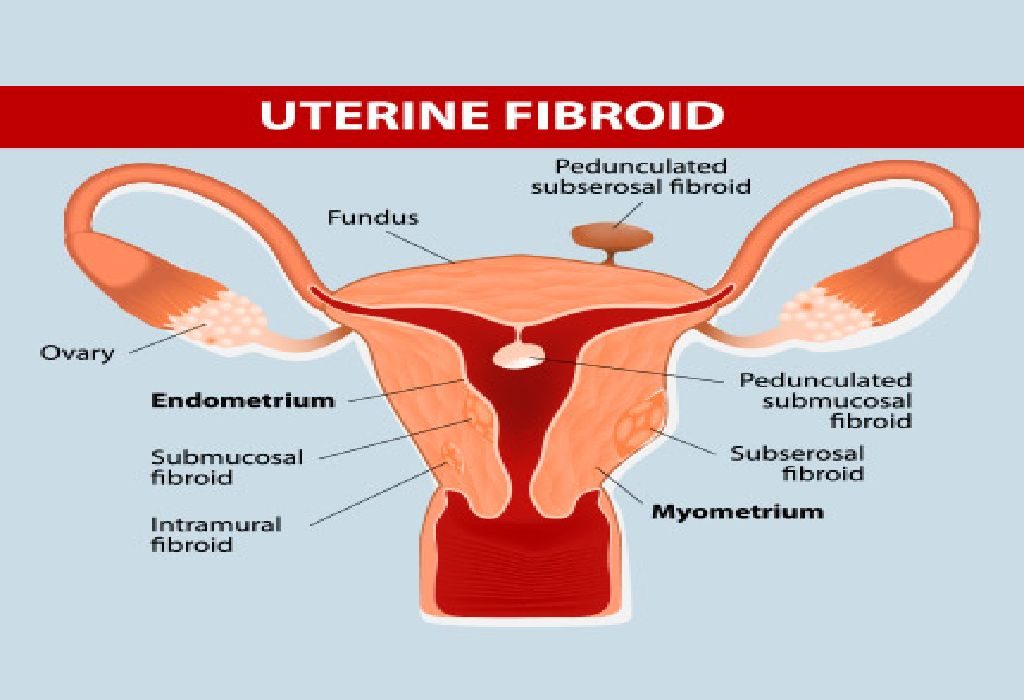 It is not uncommon to find uterine fibroids in women. Whether these non-cancerous tumours found inside the uterus will affect a woman’s health depends on their exact location.

Uterine fibroids found in the uterus are benign tumours created from the same muscle fibres as the myometrium. The myometrium is the middle layer of the uterine wall, consisting mainly of uterine smooth muscle cells (also called uterine myocytes), but also supporting stromal and vascular tissue. Fibroids are dense and round in shape. When these fibroids are located under the lining membrane outside the uterus (serosa), they are called subserosal fibroids. Submucosal fibroids are formed inside the uterine cavity, under the uterus lining, and intramural fibroids are contrived within the muscular wall of uterus.

Most women experience mild to no symptoms, but several others can go through pain and heavy bleeding during their monthly periods. Symptoms of uterine fibroids may manifest within a few months of development or sometimes take years to show up. The symptoms and problems associated with uterine fibroids include:

Can Uterine Fibroids Cause Infertility and Miscarriage in Women?

Research has shown that uterine fibroids can reduce fertility by an approximate 70 per cent, and they are also linked with increased rate of miscarriage and premature delivery.In some cases if the fibroids grow large, they can narrow down the uterine cavity increasing the risk of miscarriage and infertility. Usually fibroids affect fertility when they grow inside the uterus, hindering embryo implantation or leading to early miscarriages. However, some women give birth to healthy babies despite having large fibroids. So, there is no evidence as to how and when uterine fibroids affect fertility.
In case of a miscarriage, the submucosal fibroid affects the fertilised egg in the uterus lining. During the first and second trimesters, the fibroid can thin out the lining and reduce the blood supply, causing underdevelopment of the fetus and eventually miscarriage. But a consequent pregnancy can proceed without any issues because of the possibility of the egg settling at another location in the lining.

Uterine fibroids often do not require treatment. Only when women with fibroids have problems like acute pain, blood loss during monthly period, inability to conceive and miscarriage, the doctor makes appropriate recommendation. Some of the treatments available are:

Fibroids that grow in the inner layer of the uterus can be treated with this procedure. The fibroid growing endometrial tissue is removed from the inner lining with laser energy, a heated wire loop, or hot fluid in a balloon.

With laparoscopy, it is a minor surgical procedure.A small needle is inserted to probe or send electric current straight into the fibroid to burn it as well as surrounding blood vessels. This surgical procedure is best suited for women who plan to have children in future. The surgeon removes the fibroids leaving the uterus intact in this challenging procedure. In case the fibroids grow outside the uterine cavity, a laparoscopic myomectomy is performed.

This procedure is recommended to women who are nearing menopause or are not planning to have children. In this procedure, the entire uterus is removed.

Advanced X-rays are used by radiologists to determine the exact location of fibroid and the surrounding blood vessels. Then the blood supply to the fibroid is cut off by injecting a plastic plug into the vessel. Without adequate blood, the fibroid shrinks down and dies.

Some practitioners recommend medication that reduces the oestrogen levels, eventually shrinking the fibroid and/or temporarily interrupting its growth. However in many cases, fibroids start growing after the medication is stopped.

Though there are no specific ways to prevent fibroids from developing or recurring, you must consult a doctor if you notice any symptoms. Your caregiver will give you the best advice and recommend a treatment, if required.