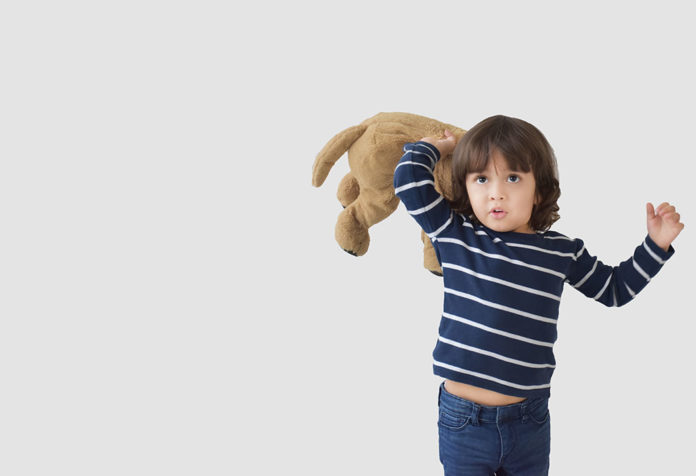 As babies grow, so do their motor skills. However, actions like throwing things or hitting people can make little sense to parents. The fact is, the developmental milestone of toddlers throwing things has less to do with behavior problems and more to do with being unable to voice their emotions.

Your baby means the world to you and every new thing he learns fills you with pride. Yet, there are there times when you can’t make sense of his behaviour! Even well-behaved toddlers can act out and throw things, may be even hit someone for no apparent reason! As frustrating and seemingly alarming as this can be, the good news is that there’s nothing to be worried about.

Why Toddlers Throw Things or Hit

1. It’s a Way of Expression

Just because your toddler has started communicating with you, it doesn’t mean that he’s proficient in the art of expressing his feelings through words. There are a number of emotions that he goes through but is unable to express them. They could be anything from feeling tired to being hungry. Acting out is also a way to seek attention.

2. It’s a Part of Exploring

As your child grows, so does his curiosity about his surroundings. Once he learns to throw things, he becomes very curious about what happens when something is tossed. The same holds true for hitting. Your toddler may want to gauge a person’s reaction. Since children learn by repeating and experimenting, he starts following this pattern.

Before associating hitting and throwing things with behavioural problems in your toddler, take the time to assess the situation. He could be doing it for fun too. Once he learns to throw things, he could enjoy watching them bounce off floors or splatter on walls. The attention he gets after could also be another reason he does it more often.

How You Can Cope With It

As a parent, it’s easy to forget that your child is still a baby and can’t properly voice emotions. Being patient and understanding will make it easier for you to cope with such behaviour.

Does anyone in the family throw things or hit older children in the presence of your toddler? There’s a good chance that he’s just repeating what he sees. Setting the right example will help your child gradually follow suit. You’ll need to speak to everyone in the family too and impress upon them to behave in a manner that your child will emulate.

It’s important that you explain to your child that hitting and throwing is bad behaviour. Pick a time when he’s in a good mood so that you have his complete attention. Show him how to give constructive voice to emotions and desires by teaching him simple yet meaningful words and actions.

A 1-year-old throwing things and hitting can be embarrassing and even annoying. However, rather than go off the handle, tackle the behaviour through love, care and patience.

90 Interesting and Engaging Trivia Questions and Answers for Kids

How can you Assert your Parenting Beliefs in a Joint Family?