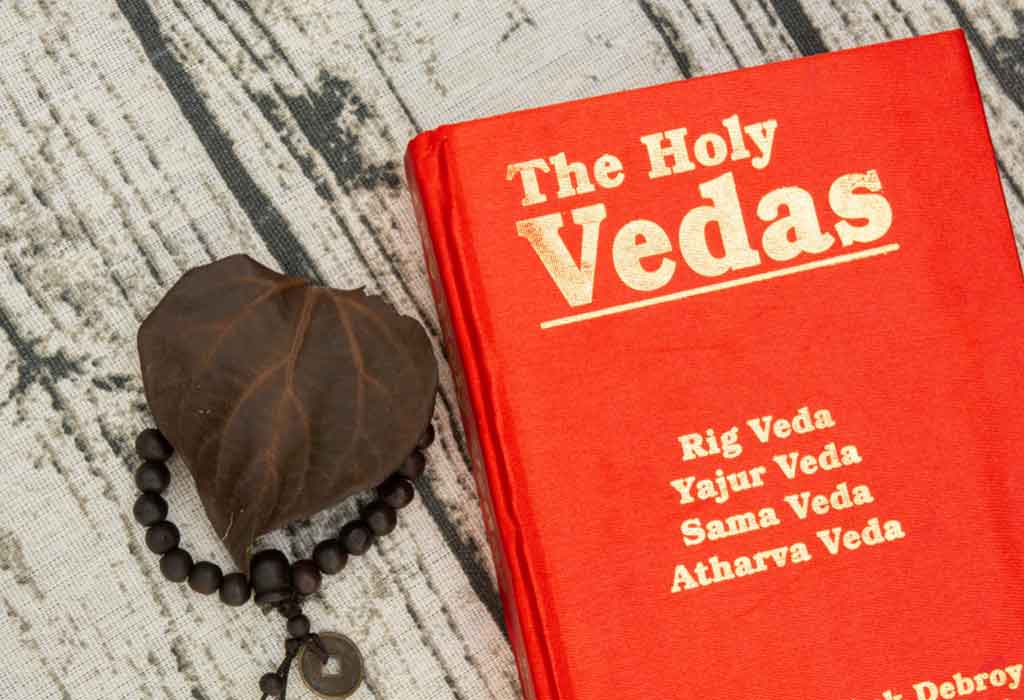 Considered to be among the world’s most ancient religious texts, the Vedas are one of the most sacred scriptures of the Hindu religion. Hindus believe that God directed the texts to scholars who passed them on to the next generations through word of mouth. Hence, Vedic texts are sometimes called shruti (hearing) or smriti (consciousness) that help us realize the true self. This treasure vault of wisdom and knowledge can thus be the proper inventory to draw inspiration from for a Vaidik name for boys.

The Indo-Aryan Vedic philosophy is structured into Vedas, Puranas, and Upanishads. Vedas scriptures are divided into four groups, the Rig Ved, Sam Ved, Yajur Ved, and Atharva Ved that comprise an extensive collection of hymns, mythological accounts, poems, prayers, chants, and religious-philosophical instructions about the essential values of life. Just like the knowledge of the Vedas are relevant in all ages, the names derived from this Sanatan Dharma or oldest religion remain popular up to these modern times.

Sanskrit was the standardized dialect of Old Indo-Aryan, originating as Vedic Sanskrit as early as 1700-1200 BCE. The earliest documentation exists in this classical language that has evolved into and influenced many modern languages of the contemporary world. The corpus of Sanskrit literature encompasses Vedic literature, which several scientists have studied to get an in-depth insight into scientific, spiritual, psychological, and behavioral knowledge. We find the root of most of the Vedic names in these philosophical and religious texts primarily written in Vedic Sanskrit, the language of the Vedas.

Whether you’re a religious or spiritually inclined person, giving your baby a faith-inspired name is an ultimate reflection of your devotion, ethnicity, and traditional values. These names from the Vedic texts represent different aspects of Hindu religious beliefs and traditions. So, instead of fretting over choosing a name for your baby boy, refer to this carefully compiled list of some of the most meaningful Vedic names for baby boys that would give meaning to his life and lay down a path for his future success.

50 Vedic Names for Boys with Meanings

This inventory of the best Vedic baby boy names with their meanings is sure to help you decide on the right one for your little prince.

Derived from a Sanskrit root word Rav related to ‘peace’ associated with the concept of wisdom, Aarav means ‘peaceful and calm.’

Derived from Sanskrit, Aditya means ‘the Sun god’ or ‘belonging to Aditi’ referring to the offspring of the mother goddess Aditi ‘the boundless one.’

With a meaning of ‘heroic,’ this Sanskrit origin name belongs to the son of Arjun, the great warrior from the Mahabharata.

This Sanskrit name belonged to a great sage and is also one of many names of Lord Shiva. It means ‘The star of Canopus,’ which is the ‘cleanser of waters.’

Brother of Krishna and also considered an incarnation of Seshanag or Serpent Sesha. An active participant in Krishna’s adventures, including the killing of Kansha.

Elder brother of Jagannath – this is also another name of Balarama. As the eldest, Balarama rides ahead of Jagannath’s chariot in the famous Rath Yatra or Car Festival of Puri.

One among the five Pandava brothers and the strongest, Bheema means “terrible, formidable” in Sanskrit. Also known for his culinary skills and love for food.

The name refers to the Moon god. It means “bright, shining or glittering.”

This name, representing ‘someone with four arms’ or ‘strong’ in Sanskrit, is another name for Vishnu.

It refers to a shrine, sanctuary, temple, prayer hall, or a sacred monument. “Caitya” comes from the root of cita or ci, meaning “heaped-up.”

It means ‘steadfast’ or ‘unshakeable.’ Considered a devotee of Vishnu; it refers to the pole star.

The word means ‘highly skilled.’ It also refers to Sati’s father, who was killed and then revived by Shiva.

Deva or Dev means a god or a divine being.

Debabrata is Bhisma’s name before he vowed celibacy. It means ‘one who accepts penance.’

Arjun was called Dhananjaya, which means ‘fire’ in Sanskrit.

Joining the Sanskrit compound Gana and Pati, this name refers to ‘the lord of the people’ or the widely worshipped deity Lord Ganesha.

Gautam is the other name of Lord Buddha, having roots in Sanskrit.

Hariprasad refers to the one who is blessed by Lord Krishna.

Harikesh was a disciple of Mahavira.

It refers to the First King of The Surya dynasty.

Lord Indra was the king of swarga (heaven) and the devas residing in swarga.

The ancient Sanskrit name means ‘disciplined,’ ‘someone with a matted lock.’ 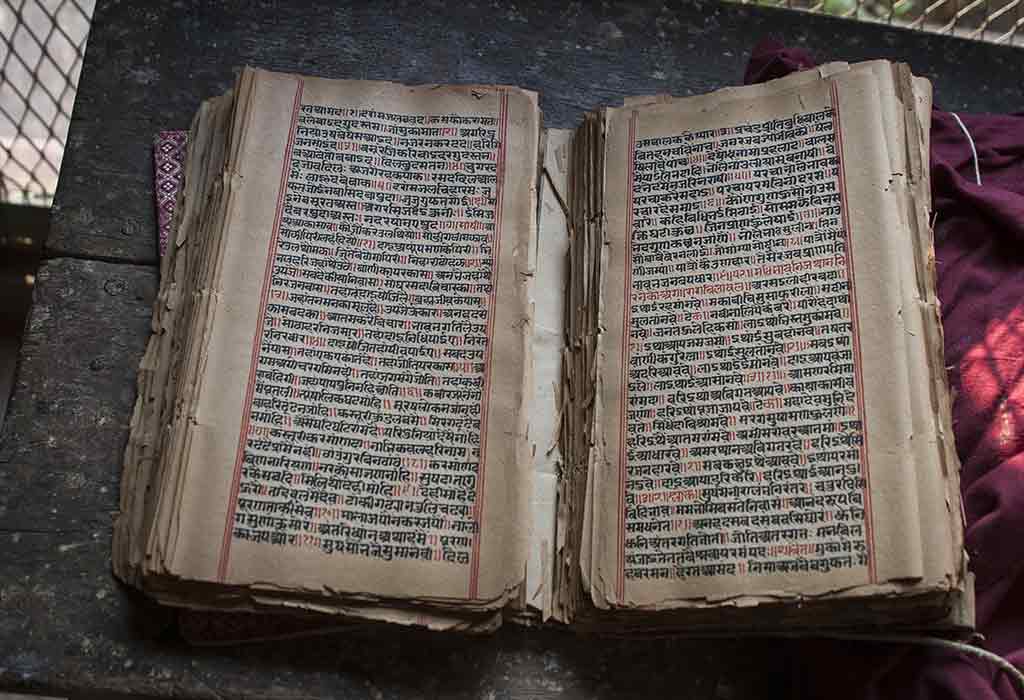 Janak means pioneer, or ‘father of Sita’ from Ramayana.

The name is of Sanskrit origin, meaning ‘divine beings,’ ‘famous sage,’ and ‘wise.’ The Pandavas had a friend named ‘Kashyap’ in the Mahabharata. The name also refers to an ancient sage who is the descendant of Marichi, who helped Ravana in kidnapping Sita.

The name refers to Lord Vishnu, who is mentioned in the Vedic Mantras or hymns. It also means ‘the ruler of the earth.’

Manuj means ‘the son of Manu.’

This ancient word of Sanskrit origin means ‘neighbor or kindred’ or ‘fellow man.’ It is another name given to Lord Krishna and Lord Vishnu as a reference to the elusive powers or maya to confound every being.

Nilakanth is the name of Lord Shiva, which refers to the blue throat of Shiva as he had consumed the poison to save the world. Nila means ‘blue,’ and Kanth means ‘throat.’

Om is the preeminent Sanskrit mantra and symbol of Hinduism. This Sanskrit word means’ gift of God’.

Parth name means ‘one who never misses the target,’ or ‘king.’

Pavan refers to ‘the god of wind.’ This Sanskrit word is used to refer to Lord Hanuman.

Parixit means ‘Tested One’ or ‘Proven’ or the son of Abhimanyu from epic Mahabharata.

The name Rudra comes from ru, meaning ‘Roar or howl.’ It is a personification of terror. When Shiva begged for a name from his father, he was granted Rudra or ‘howler’ due to his tremendous powers as the storm god.

Shantnu was the father of Bheeshma and a King from the epic Mahabharata. The name means ‘wholesome’ in Sanskrit.

The Sanskrit origin name means ‘surface or top of a mountain.’ The name also refers to ridge and tableland.

Saraswata refers to the ‘husband of Saraswati.’ Saraswati was the holy river mentioned in the Rig Veda.

This unconventional choice of name is mentioned in the Mantra, Om Trayitnave Namah, in which we recall Lord Ganesha or Shiva. All the three Vedas taken together are called Trayit.

Tirth means a ‘holy place’ or ‘place of pilgrimage.’

Vishwanath is an epithet of the god Shiva. Originating from Sanskrit origin, it means ‘Lord of the universe.’

This ancient name is of Sanskrit origin, means ‘wise sage’ or ‘preacher.’

This name means ‘short dwarf’ in Sanskrit. The name is given to the fifth avatar of Lord Vishnu when he takes birth as a dwarf Brahmin as per the Puranas.

Vedant means ‘ultimate wisdom’ or ‘one who is blessed with Vedic knowledge.’

Yagyesh is the ‘God of holy or sacrificial fire.’

As per the Vedic scriptures, a person’s name is likely to influence his character, personality, career growth, and spirituality. The vibrations caused by frequently calling a person’s name affect both the caller and the person called. If a person’s name is connected to divinity, it invokes divine vibrations. Naming a child after a god or his energies brings all the auspiciousness and increases the relationship between the caller and the called person. Boy names in Vedas are not just spiritual but are filled with positive energy. Thus, these powerful names carry a special significance that will lend your child an identity and a place in the world.