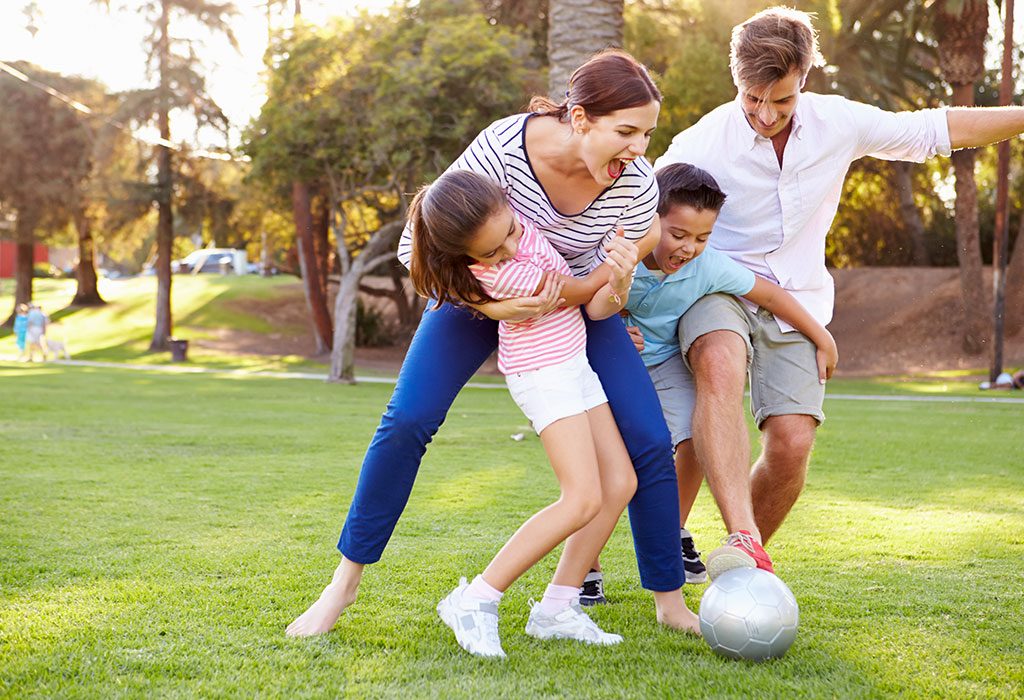 Be it plastic balls, tennis balls, or softballs, kids do get attached to them rather quickly and tend to make them their best friend. Having a ball to play around in the garden is a great physical activity as well. However, all games don’t have to simply be about catching a ball and throwing it back. There are fun ball games to play with kids that can make a simple activity absolutely enthralling, too.

Some of the best ball games for kids are listed below.

Indoor ball games can be a great option when the weather doesn’t permit kids to go out.

1. Guide The Ball Through A Maze

All you need for this are simple ping pong balls, a bunch of books or boxes, and a couple of straws. Arrange the books and boxes in such a way that they create a maze-like arrangement of sorts in your hall. Let each kid have their own ping pong ball. Use a temporary marker to make a design on each. Every kid then uses a straw to blow on the ball and pass it successfully through the maze. The one who does it in the shortest time wins. 2. Pass The Balls Through The Tunnels

If you have a long hallway or passage in your home, this is a great game to play. Use some old boxes and cut out small holes on one side. Place these boxes upside down so that these holes form tunnels. All kids troop together on one end of the hallway with the boxes on the other end. Start rolling tennis balls towards the boxes such that they pass through the tunnels. The kid to roll the most balls through the tunnels wins. A table, a bunch of straws, a ping pong ball and a couple of cups. That’s all you need to create the environment for an extremely competitive game. This can be played either by using the power of breath or by using hands. Tape both the cups on either side of the table to form the goal posts. The straws are the hockey sticks. Let each kid do his best to put the ball in the goal by using straws to push it around, or blowing through them to push it in one direction. This one is bound to create some litter but is so much fun to play, you might end up joining the kids as well. Wrap a good amount of duct tape around a cardboard piece. Don’t keep it straight but make it in a criss-cross fashion such that there are some areas of the board that are uncovered. Wrap the duct tape with the sticky side outside. Then, take old newspapers and crumble them into balls. Stand at a distance and throw them at the board in such a way that the ball sticks to the board. Bowling is always about dropping the most pins. How about dropping the least ones? All you need is a medium sized ball and all those used cold drink bottles you’ve stored away. Arrange them in the hall in a staggered fashion. Now roll the ball in such a way that it manages to drop as fewer bottles as possible. The one to drop the least bottles wins. There is nothing like playing ball with kids when the day is bright and beautiful outside.

1. Dodge The Ball Without Moving Your Feet

This is extremely exciting and works best when played in a group. Everyone in the group is assigned a number. The ball is kept in the centre of the circle. One player shouts out a number of a player. That player needs to grab the ball as soon as he can while the others run away from the ball. Once he gets the ball, he shouts, “STOP!”. At this point, everyone stops. Now, the player with the ball has to try and hit one person. He can take two steps in a single direction at the most. The other player can move their body to dodge the ball without lifting their feet. 2. Bag The Ball In The Basket

A quirky variation of basketball, this is where a plastic bag becomes the basket. Kids are split into teams and in each team has one goalkeeper. This goalkeeper has a plastic bag and his aim is to ensure that his team manages to throw as many balls as possible into the bag. The goalie can move the bag around without lifting his feet. The other team players are supposed to coordinate with the goalie, communicate correctly, and manage to bag the ball together. The team with the most bagged balls wins. 3. Hop, Skip, And Jump While Balling Around

One of the popular football games for kids that needs attention to understand other commands and directions as well. This can be played amongst two players, too. One player acts as the goalie. The goalie will roll the ball towards the player. Once the player starts moving towards the goal, the goalie can call out to the player to either hop, skip or jump using the ball. The player has to follow the command to the letter and do the action while continuing to move forward towards the goal. The tables can be turned for another variation, too. Ball games don’t have to be only physical. They can help exercise your brain, too. Form a circle of kids. Whenever one person throws the ball towards another, he shouts out a thing or an object that has various categories in it. When the other kid catches the ball, he has to shout out something relevant to the object and then throw the ball to another, while shouting another category. For example, a kid could shout “colour” while throwing the ball. The other kid catches the ball and shouts “red” before throwing the ball to another kid and shouting “country”. That kid needs to shout out a name of a country and the game continues. Every kid learns to play this by himself all alone, usually when he is part of a football team. The tendency to balance the ball for as long as possible by bouncing it on a single foot. This can be further made difficult by using each foot alternately. Moreover, if there is a group present, everyone can stand in a circle and pass the ball to each other while keeping it airborne. This can be quite challenging and fun and requires everyone to be constantly vigilant. Further mixes can be made by switching from the feet to the head and bouncing it intermittently as well. All these fun ball games for kids are a great chance to undertake a lot of physical activity. Contrary to popular opinion, ball games can be enjoyed within the confines of the home as well if it has been a rainy day outside. With a little bit of creativity, every game can be quite fun and be making a variety of rules can add a new flavour to a typical age-old game. Kids can work together to form their own rules and come with new game variations of their own. Later on, they can start their championships, too.

Previous article « Your 36-Week-Old Baby – Development, Milestones & Care
Next article Surya Namaskar for Kids – Benefits and How to Do »