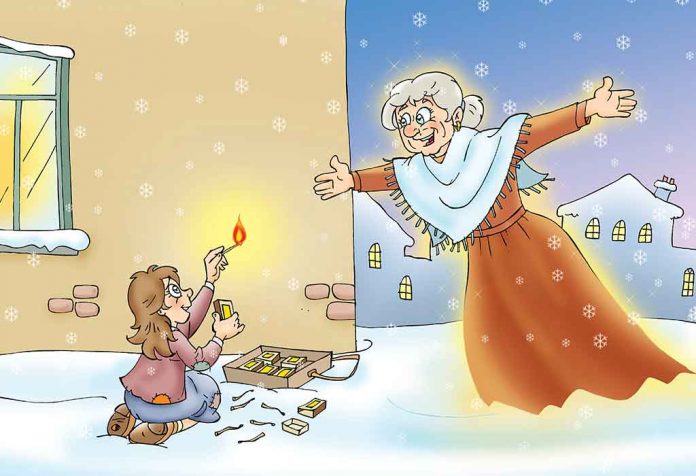 The Little Match Girl by Hans Christian Andersen is a story of a poor little girl sent by her father to sell matches on New Year Eve in the bitter cold. The match girl died a tragic death due to indifference shown by the wealthy and affluent citizens of the so-called civilized society. The author was also inspired by the struggles and the hardships his mother had to face as a child. He also had a miserable childhood which is reflected in the story below.

Short Story of The Little Match Girl For Children

It was the last evening of the icy cold month of December, ‘The New Year’s Eve.’ The weather was severely cold outside, the kind that made one crave for the steady warmth of a home. The heavy snowfall had covered the whole town with a blanket of snow.
On this chilly and dark night, a poor little girl walked barefoot and bare-headed, selling matches as ordered by her cruel father. Snow covered her beautiful golden curly locks. Her feet were numb with cold as she had lost her pair of slippers, too big for her feet, as she crossed the road hastily because of a speeding carriage. Trembling with cold and starvation, she could barely pull herself along. She could not talk anyone into buying even a single match from her. Penniless, she was reluctant to go home for fear of her father’s wrath. Also, what she had as a home was nothing better than the street she roamed around. They only had a roof with the chilly winter wind whistling through the cracks. She was too hungry, and the aroma of delicious cakes wafting in the air made her restless. She looked expectantly at the glowing gifts and twinkling lights adorning the Christmas trees placed on the windows. She could see children having candies and cupcakes. Alas! Gratitude and sharing being the essence of the Christmas season were overlooked in her case. No one seemed concerned.

Frozen, weary, and tired, she squeezed herself between the walls of two houses and sat down. Numb with cold, she struck a match to keep herself warm. The bright flame lighted her beautiful face to a crimson red. Oh! What a lovely and warm glow was that, and what a strange light! It seemed as if she was in front of a great iron stove with shining brass knobs and brass ornaments. The little girl stretched her frozen feet to warm them. Alas! The stove disappeared as the match ran out, and here she was, holding a burnt match in her hand, shivering with cold.

Struggling hopelessly to keep herself warm in this biting cold, she burnt another match. The light illuminated the wall in front of her, and she could see inside. The dining table was full of sumptuous delicacies, a huge roasted goose stuffed with apples and prunes, marzipan cakes, cookies, and gooey chocolates. Suddenly, the goose jumped down from the dining table with knife and fork still stuck in its back and waggled towards the little girl. Taken aback for a moment, she then outstretched her quivering hand to catch it, and whoosh! The match went off again and with it disappeared the goose. It was pitch dark again, with the unwelcoming cold wall staring her in the face.

Disappointed and hungry, the matchstick girl struck another match and in a flash, appeared an incredible Christmas tree, lush green, embellished with silver and golden stars, brilliantly coloured balls, full of tempting goodies, adorned with thousands of candles. Her eyes widened in disbelief. It was much bigger than the one she had seen last year at a wealthy merchant’s home. Mesmerized, she outstretched her nimble hands to pluck the gifts, and suddenly the match went off again. She saw the bright candles from the Christmas tree rising higher up in the sky. Slowly, the candles transformed into thousands of stars, brightly twinkling in the night sky. Suddenly, the little girl saw a twinkling star falling from the sky, smearing the sky with its bright light. The stardust fell on the little girl, bejeweling her golden hair.

“Someone must have died!” she wondered. Her old grandmother had told her that a star falls when a soul departs from earth for its heavenly abode. Once again, she struck another match and good heavens! Her departed grandmother, the only one who loved her, was in front of her. Glowing with love and fondness for the little angel, she embraced her. Tears rolling down her cheeks, the little girl snuggled in and held her grandmother tightly, feeling the warmth of her grandmother’s body energizing her. “Take me with you, grandma,” the little girl sobbed. “Please do not go away; I know you will also disappear when the match burns out. You will also disappear like the iron stove, like the stuffed goose, and like the lovely Christmas tree.” Fearing her grandmother would leave her again once the match runs out, she took out the whole bunch of the matchsticks from her pocket and stuck them together on the wall.

All the matches blazed with a glowing light brighter than the sun, making the night come alive. The tranquillity and happiness on their beautiful shining faces were witnessed by the dark snowy night. The grandmother kissed the little match girl on the forehead, caressed her beautiful golden locks. She took her in her arms, and they both started rising higher up in the sky, preparing to enter a world free of sorrow, a world free of hunger, a world free of fear. Both of them rose towards heaven, relieved of their miseries forever, in the loving lap of the creator.

The new year dawned on the match girl’s lifeless body, lying squeezed between the two houses, Frozen to death on New Year’s Eve, still seen clutching tightly half a bunch of unburnt matches in her hand. Her lips dry and white from the cold but still courting a smile. Her face was still rosy and content. “Oh, poor little matchstick girl!” wondered one. “She must have been trying to burn those matches to keep herself warm in this terribly cold weather,” commented another. What no one realized was the beautiful visions she had at night, and no one could understand the contentment and satisfaction on her face as she embarked on her final journey tucked in her grandmother’s bosom and entered the abode of eternal peace, where she could live without fear of her tyrant father, without hunger and hardships, without any struggles and sufferings.

This story highlights the irony where people are celebrating the birth of Jesus Christ, the child of Mother Mary, on the one hand, and on the other hand, they are apathetic to the matchstick girl leading to her tragic end. The story depicts the accurate picture of society at that time. The story also portrays the little girl’s hope of pulling through difficulties and her faith in God that he would help her through her struggles.

Stories are a great way to connect with your child and help develop a bond between the parent and the child. So, build the bridges of love and affection with your child with the fantastic art of storytelling.

The First 15 Days of Motherhood – My Experience