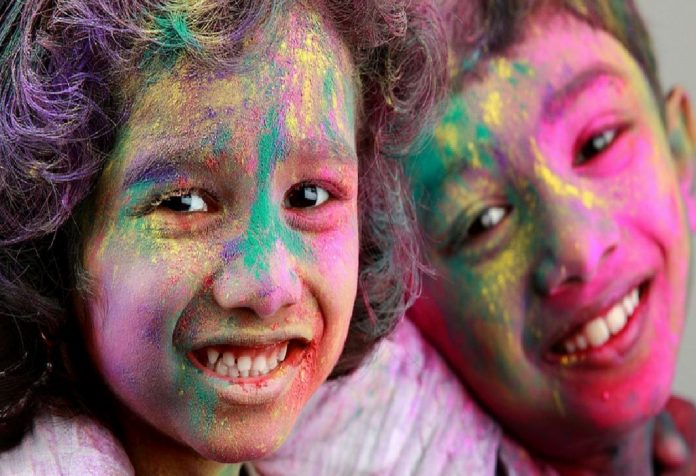 The Palas trees are blooming with tesu flowers. The crops are dancing merrily in the fields, bidding goodbye to the gloomy winter days, rejoicing at the advent of spring – the season of joy and hope, the season of Holi. The markets are teeming with different kinds of pichkaris – the main reason this delightful festival is so popular among kids. While you are busy with the festive preparations, don’t forget to teach your child why we celebrate Holi.

Holi is a festival that has many more reasons to celebrate than we know. Various aspects of Holi have various significances. By letting our kids know these aspects, by teaching them their significance, and educating them on why we celebrate Holi, we give them reasons to cherish and heartily embrace the festival with much more enthusiasm than before.

Why Do We Celebrate Holi

The reasons for celebrating Holi are manifold, be it mythological, social, scientific, or environmental.

On the eve of Holi, while gathering around the bonfire or the ‘Holika’, tell your kid the history of Holi, the story of which goes as follows. Hiranyakashyap was a demon king in ancient India. To avenge the death of his younger brother, who was killed by Lord Vishnu, he prayed for several years to Brahma. Pleased with his devotion and penance, Brahma granted him a boon that made him seemingly invincible. This led Hiranyakashyap to believe that he himself was like God and forced people to worship him. But his son, Prahlad, was a noble boy who did not pay heed to the cruel king’s demands and remained a loyal devotee to Lord Vishnu. This deeply angered Hiranyakashyap, who decided to kill his own son with the help of his sister. His sister, Holika, had means of remaining immune to fire. Thus, with Prahlad seated in her lap, she sat on a burning pyre of fire, with every intention of having Prahlad being burnt alive.

However, their plan went astray when Prahlad recited the name of Lord Vishnu all throughout and stayed safe; Holika, on the other hand, did not survive the fire. Lord Vishnu killed Hiranyakashyap soon after as well. Holika’s death signifies the defeat of all evil and the reason for the celebration of Holi.

But when did colours come into the picture?

This tradition dates back to the period of Lord Krishna, who is a reincarnation of Lord Vishnu. It is believed that he was a prankster and loved celebrating Holi with colours across Vrindavan and Gokul, thus making it a community event.

Watch how your child’s eyes light up while hearing these stories, and also, use this opportunity to teach him that good always triumphs over evil.

The next day, while your kid is getting ready to play with colours, explain to him that this is the day to turn his enemies into friends and to forget any grudges about them. Teach him to strengthen his relationships and create great bonds with people on this day, using colours. Take him along to visit friends and relatives in the evening. Stress upon the fact that this day is to celebrate love and not to harm others.

Scientists believe that when the liquid dye or ‘abeer’ penetrates into the body, it strengthens the body’s ions and adds to its health and beauty. Explain to your kid the goodness of natural colours that are made of different flowers and leaves. Knowing the adverse effects of chemical colours will demotivate him to use them for playing Holi. Also, let him know the scientific reason behind ‘Holika Dahan’. Holi comes at the time of the year when the largest growth of bacteria is observed. During ‘Holika Dahan’, the heat from the bonfire kills the bacteria in the surrounding, thus saving us from illness.

Holi marks the arrival of spring. Explain to your kid how the environment changes during spring. Show him the blooming flowers, the trees with new leaves, the bees humming and the birds twittering in the morning. The colourful flowers, the longer evenings and the late sunsets – all hint at nature being at its best, this time of the year. Teach your kid that Holi is a celebration of nature. This will also help your kid become a nature lover. Holi is celebrated across three days in many states of India, and each day comes with its own set of rituals and customs.

How Is Holi Celebrated in Different Parts of India and Abroad?

Eery state/region in India has a unique way of celebrating Holi. Some focus on the religious, while some consider the historical significance of Holi. However, the festivities are always-always colourful. The traditional bonfire can be witnessed in the states, such as Maharashtra, Rajasthan, Uttarakhand, etc. The other states have a mix of music, dance, storytelling, etc.

Punjab has a unique Sikh festival, which is celebrated either a day before or on the day of Holi. It’s called Holla Mohalla, and it is celebrated to pay homage to the brave Sikh warriors. The festivities include horse-riding, poetry recitation, music, and dance, and, of course, there’s colour.

In Uttarakhand, Holi is recognised as Kumaoni Holi. People celebrate it with their near and dear ones by smearing colours on each other’s faces and singing classical and folk songs. The festival has different versions as well – Kumaoni Khari Holi (standing Holi) wherein people express their joy through dancing, Kumaoni Baithak Holi (sitting Holi), wherein people sit in groups and sing songs, and Mahila Holi, which is only for women to celebrate the festival of colours.

Himachal celebrates the festival with as much enthusiasm. People play with colours, visit their loved ones and exchange sweets. Many also head to the fairs, which are commonly held in most regions of the state.

In West Bengal, the festival is celebrated as Dol Jatra, Dol Purnima, or the Swing Festival. A procession is held every year, and a decorated palanquin of Radha and Krishna is carried around the main streets. Groups of people singing folk and devotional songs, and dancing, as they play with colours is a common sight during the festival in West Bengal.

Rajasthan also has a unique way of celebrating the festival. The bright colours cannot be missed wherever people gather together to play Holi. Holika Dahan (traditional bonfire) is an important ritual carried out in most regions of Rajasthan on the eve of Holi. And, how can we forget the food? When in Rajasthan, one cannot miss the gujiyas and thandai during Holi.

In Maharashtra, Holi is a two-day festival. The first day has the Holika Dahan (traditional bonfire) to ward off evil. The next day is when the skies, the earth, and everyone else, is covered in gulaal. Most locals also make Puran Polis and relish them with milk, ghee, yelavnichi aamti, steamed rice and some deep-fried pakoras and papads. Now, that is some celebration, isn’t it?

Central India also has similar ways of celebrating Holi; however, some regions of Uttar Pradesh celebrate what is called “Lath Maar Holi”. This traditional activity consists of women armed with lathis or sticks and men armed with shields. The women run behind the men and playfully hit them with their lathis (sticks) as the men use the shields to protect themselves. Some regions in Uttar Pradesh celebrate Holi for seven days.

For the Goans, Holi is recognised as Shimgo. The festivities consist of colourful traditional clothes, traditional folk songs and dances. The delicious Goan food cannot be missed, either. Fish, the staple, is a must-try on this day.

In parts of Telangana, the festival has a different approach and is related to the legend of Kama Deva. It isn’t celebrated with colours, but for days before Holi, people gather wood, and on the day of the festival, all the wood is used to make a bonfire.

Tamil Nadu also has a similar way of celebrating Holi without any colour. In many parts of the state, people head to the temples to offer prayers to the deities and celebrate their union with their respective consorts.

Since it’s a small world, several other countries across the world also celebrate the festival with colours, sweets, feasts, music, dancing, storytelling, etc. People also exchange gifts and make merry with their loved ones on this special day.

This Holi, explain to your child the importance of ‘Phalgun’ month in the Hindu calendar. Let him know that it is the full moon day on which Holi is celebrated. Show him the full moon. Use the internet to show him how Holi is celebrated in different parts of the country. Also, encourage your kid and his friends to celebrate an eco-friendly Holi.

Ultimate Cooking Hacks That You Must Try

Priyadarshika Ingle - August 2, 2021
You could be a friend of the bride or groom or also a relative flying in for the wedding, no matter what, women always...