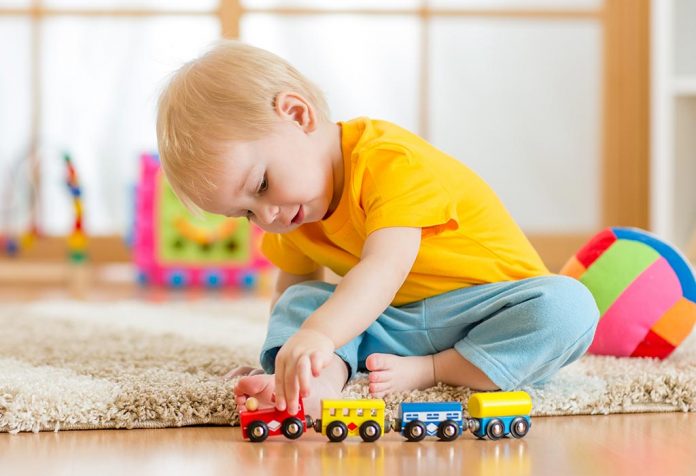 Adults do a lot of hard work for earning a living. But a kid’s life is all different. They just need toys by their side and a company to play along. But company is not always available. You as parents may be busy earning big and may not have time for your kids. This is why encouraging solitary play in early childhood becomes a must. When your little one starts to enjoy his own company, you would be preparing him to fight his battles alone, later in life.

What is Independent Play?

Solitary play definition implies, playing on your own. As a matter of fact, babies can start playing as soon as they start focusing on objects with their eyesight. When a baby is given an object that amazes him, he usually spend a lot of time contemplating and wondering what it is.

Solitary play is a beginning of one’s independent living and a step towards developing social interactions. When a baby learns to enjoy his own company, he need not depend on anyone and would also learn creativity by doing his own thing. However, to be able to leave your kid alone; a lot of patience and tricks should be kept in mind.

Solitary play age in children starts as soon as they begin to see things clearly. But some experts have a different say. They believe that a baby can be indulged into solitary playing once he reaches the 6-8 months mark. This is because; by this time a baby can hold objects while sitting on his own.

What are the Different Types of Solitary Play?

There are different ways to encourage in your little one. Though the noteworthy ones include:

Kids love to explore things. Owing to their naïve nature, kids want to explore everything that gets into their hands. And, if you are choosing an open-ended toy, the kid would indulge with it for a longer duration without distraction. If there were an option of playing with the same object in different ways, kids would love it. 2. Set Up a Stage of Things

When you combine different toys together in a fun way, a kid would instantly get involved. It is similar to making a story setting with different objects decorated to make things interesting and fun.

Prefer indulging the kids in playing games where they have to activate their brain cells to work out things. Something, like building blocks or putting a key to the toy so that it dances, would be an interesting task.

Benefits of Solitary Play for Children

The ubiquitous benefits of encouraging independent play in toddlers include:

1. Having Fun on their Own

When you let your kids play by themselves with no support at all, you give them a chance to have fun in their own imaginative ways. This, in turn, helps them later in life by not depending on anyone for their fun and happiness.

2. Emerges the Imagination In them

You will not realize how imaginative your baby is until you leave them alone. Eventually, you’ll be surprised to know how they interpret things and play with them uninterruptedly.

Life is all about being your own hero. And, the sooner your kid realizes it, the better. Independent play aids in teaching your little ones how to enjoy their own company. In turn, they will not depend on anyone for anything no matter what the situation.

4. Prepares them for School

When you leave your kid to play on their own, you indirectly prepare them for school. You can’t be always by your kid’s side, and this is a fact. Children usually cry and can’t let go off you when they start going to school. And, when you teach them how to be happy in their own company, they’ll happily step into the new learning phase without you holding onto them.

5. Makes them a Problem Solver

Kids rely on us for everything. In their mind, they know the fact that you are there for them always. Leaving your kids alone to play by themselves would teach them the importance of staying alone and loving their own company. Moreover, they’ll become the problem solvers and would find their ways out of any situation in later stages in life.

6. You Get the Much Needed Break

Everyone is aware of the fact that handling kids is a challenging task. From changing diapers to helping then take their first step; parents do everything that is needed. By encouraging toddler independent play ideas, you help yourself too. You can enjoy some time for yourself while your little one busy playing.

How to Encourage Independent Play In Children?

There are numerous ways that you can follow to encourage solitary play in children. What are those ways? Have a look for yourself.

1. Provide them the Right Toys

Kids love anything that is unique and amazes them. Give them innovative toys like building blocks or clay they could experiment with. You could also buy your kids Cubelets with Lego pieces or puzzles that they could solve. 2. Give Your Kids Space

Giving your kid his own space to analyse and do things would be beneficial. A kid should be given his space to and the freedom to make his own choices. The moment you force anything on them, they tend to become more dependent.

Some children may instantly find their comfort in playing alone while some may take their own sweet time in finding their happiness alone. You need to understand your child’s psychology and his individual needs rather than pushing them into something they don’t like.

4. Give them an Open Play Space

Giving your kids the right space to play would be the right thing to do. Giving them an ample and a safe space. You could even refer to play space designs for the same.

Letting your kids play without interrupting them would be encouraging to a great extent. Even an appreciation or a suggestion should not be encouraged as this could break their flow and interest at the same time.

6. Let It All Go Natural

Do not force your kids into self-playing. Whether he is 6 months or 3 years old indulging in independent play, letting it come about naturally would be the best option. Consider not telling them what to do and what not to. Use easy going words that sound kind and encouraging. By simply giving them the control over their play time you would be doing the needful.

Looking at everything related to solitary play, you must be pretty sure when, why, and how to encourage your little ones into it. However, remember to never leave them alone for a long time and always keep their playing environment safe. You could also install CCTV cameras around to keep track of their playing times so that you can also know what the kid is up to.

Do Milk Teeth Need Special Care? Here’s Everything You Need to Know About Your Child’s Teeth!

10 Best Maharashtrian Dishes You Must Try