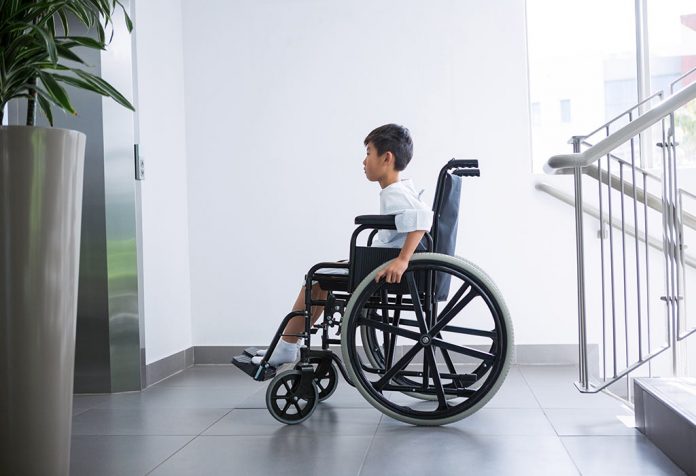 Children tend to face the risk of numerous complications pretty early in life. While most of the infections that occur externally can be combated well with vaccines and medications, certain issues can crop up as a result of the genetic makeup of the children themselves. Muscular dystrophy is one of those that affect many children and leads to a lifestyle that is extremely debilitating for them.

What is Muscular Dystrophy?

The term, muscular dystrophy, collectively refers to a bunch of diseases, all of which impact different muscles in the body and cause them to deteriorate and weaken. The result is an inability to control the movement in those areas where these muscles are located, which could also affect the muscles of different organs, too.

What are the Main Types of Muscular Dystrophy?

Muscular dystrophy can occur in various forms, affecting different regions of the body and in varying degrees.

This type of dystrophy is quite common in both genders and can occur at any stage of life. The name is derived from the stiffening of muscles and spasms that occur as a result of this condition, termed as myotonia. Such effects are highly observed in people who reside in places of cold atmospheric temperatures. The life expectancy, in this case, is highly impacted since it is known to affect various regions of the body right from the eyes to the nervous system and multiple glands as well.

While myotonic is commonly observed in people of all ages, Duchenne muscular dystrophy is common in children around 2 to 7 years of age. This disease begins to affect the muscles early on and leads to a permanent weakness and reduction in their size. Most children require a wheelchair to move around by the time they reach their teens. Malformation of limbs may also occur as a result and severe cases have shown complications in breathing and heart functioning as well. The life expectancy of kids with this diseases is limited to early adulthood.

Quite similar to Duchenne, the Becker dystrophy can be termed to be a milder version of it, which is known to affect only male children. The symptoms are similar as well although the severity and progression are comparatively less intense than Duchenne dystrophy. Heart problems are observed in children as well but many cases have been observed where such kids have lived late into their 30s and 40s, too.

This disease directly affects the ability to walk properly, since the progressive weakness of muscles impacts the areas of shoulders, arms, legs and hips. Affecting both genders in their teens, most kids need wheelchairs to move around by the time they cross their 20s.

Compared to other dystrophies, this diseases is unique in the regions it affects the most. The weakness sets in strongly in the muscles of the upper arm, shoulders, and primarily the face. The progression of weakness is quite varied since there are periods where the dystrophy is quite rampant. While life expectancy is mildly impacted, there are major problems when it comes to eating food or talking to people.

At times, newborn babies tend to have dystrophy as well, right at birth. Caused as a result of myosin deficiency, such dystrophies occur immediately following birth or in the initial weeks of the child’s life. Another variation of this dystrophy is the Fukuyama congenital dystrophy. While other types might result in contractures affecting the joints, the Fukuyama dystrophy affects the brain muscles and results in severe seizures.

As the name suggests, this progressive muscle weakness primarily affects the areas of the throat and eyes. Compared to other forms of dystrophy, this disease is majorly observed in adults past their 40s, with the weakness progressing gradually. In its peak forms, the weakness can manifest into pneumonia or even instances of choking on food while swallowing.

One of the mildest and rarest forms of dystrophy, this condition primarily impacts the muscles that are distant from the middle portions of the limbs. While it causes slight restrictions in movements, the long-term impacts are not as severe as other forms of dystrophy.

An extremely rare form of dystrophy, this is majorly observed in male teenagers. Caused a result of a defective gene, the weakness of muscles directly affects the shoulder region as well as the legs. Heart problems are observed in such children and even from the source of the defective gene, which could be the mother or a female sibling. Contractures are known to be quite common in this case, too. Genetic problems are the major cause of muscular dystrophy occurring in children and adults. A defective gene causes Duchenne dystrophy, which fails to secrete a protein called dystrophin. Other genetic sources are linked to chromosomes attained from the mother since the X chromosome is highly responsible for it. This is also why females have lower chances of experiencing dystrophy since both their X chromosomes need to be defective for that to happen. In rare cases, the dystrophy occurs when a new mutation or abnormality occurs in the individual itself.

Various types of dystrophies have varying symptoms. But the most common ones are:

The diagnosis usually begins with blood tests to recognize certain genes. This is further complemented by conducting a muscle biopsy by examining a sample of muscle tissue under a microscope.

To check for muscle damage, an electromyogram helps to understand if the weakness is due to nerve damage or tissue damage. An ECG can also help in detecting heart-related problems and bring the diagnosis closer to a conclusion.

Here are some of the complications due to muscular dystrophy.

Unfortunately, there doesn’t exist any absolute cure to get rid of progressive muscle weakness altogether. Most of the treatment methods make use of medicines and therapeutic measures. Extreme cases might require surgical intervention.

Primarily, medications are suggested for the heart if the dystrophy is interfering with its natural functioning. To counter the damage sustained by its muscles, beta blockers or angiotensin-converting enzyme inhibitors are commonly prescribed.

The next step is to improve the muscle strength to a higher degree and hinder the progress of muscle weakness. Prednisone and other corticosteroids are usually prescribed to make this happen, but these cannot be consumed for a long-term without side-effects.

The effectiveness of the medicine is yet to be conclusively determined since it works by acting on certain gene defects, but it is totally safe for consumption. Curing the dystrophy might be a long shot but there is a strong chance of muscle strength receiving an increment and keeping the effects of dystrophy at bay.

In most cases, supporting devices help in improving the mobility in most people. Mild dystrophy can be countered by making use of wheelchairs and walking canes. Braces are also used in such cases, especially when the dystrophy has resulted in contractures. By stretching the muscles in the joint regions, their deterioration can be further delayed.

Therapeutic exercises should be undertaken only after a doctor approves them. Simple exercises like swimming or walking help muscles get the regular movement they need, in a safe and simple way. Few bodyweight exercises might be beneficial in that regard for adults. The weakness that dystrophy brings often causes the limbs to bend inwards and stay locked, which further restricts the degree to which they can be moved. Certain exercises can help increase the range of motion and bring back a degree of flexibility as a result.

The swallowing problems that occur as a result of it can be corrected by creating a surgical incision in one of the throat muscles, which can make it easy to swallow. At times, a balloon is also inserted in the oesophagus to expand the throat tract and avoid instances of choking. A feeding tube is generally the last resort.

If medication fails to counter the effect of dystrophy on the heart, a pacemaker might need to be surgically installed to regulate the beating properly. Corrective surgery is also required in cases of scoliosis, where the spine needs to be adjusted. Drooping eyelids would need similar treatment as well.

Your child would quite soon understand that his condition is unique from other children, and might feel rejected or lonely as a result of it. Understanding the outlook for your child’s life and adjusting his lifestyle to go with it is quite necessary for keeping him a functioning individual throughout his journey.

Long-Term Outlook for a Child With Muscular Dystrophy

Since progressive muscle weakness continues to build throughout life, a child needs to adapt to a totally different way of living to combat it effectively. Simple actions such as walking around or sitting for a long time could get problematic, and the teenage years of a kid would be strongly impacted as a result of it.

Muscular dystrophy is a disease which is usually genetic. Therefore, any change in the diet will not improve the condition or treat it effectively. That being said, it is important to adjust the diet in order to avoid chances of obesity, leading the child to be overweight and worsening his life further. Changing your own lifestyle to suit the child might help in keeping his spirits high as well.

For children suffering from muscular dystrophy, life expectancy can be impacted quite severely depending on the intensity of the condition. It is necessary to cultivate a healthy atmosphere at home and allow a discussion with your child about the situation. Talking to a counsellor can be beneficial for everyone as well.

Everything Happens for a Reason, and the Reason Is Always Good

The Importance of Siblings When Life Is Restricted Indoors