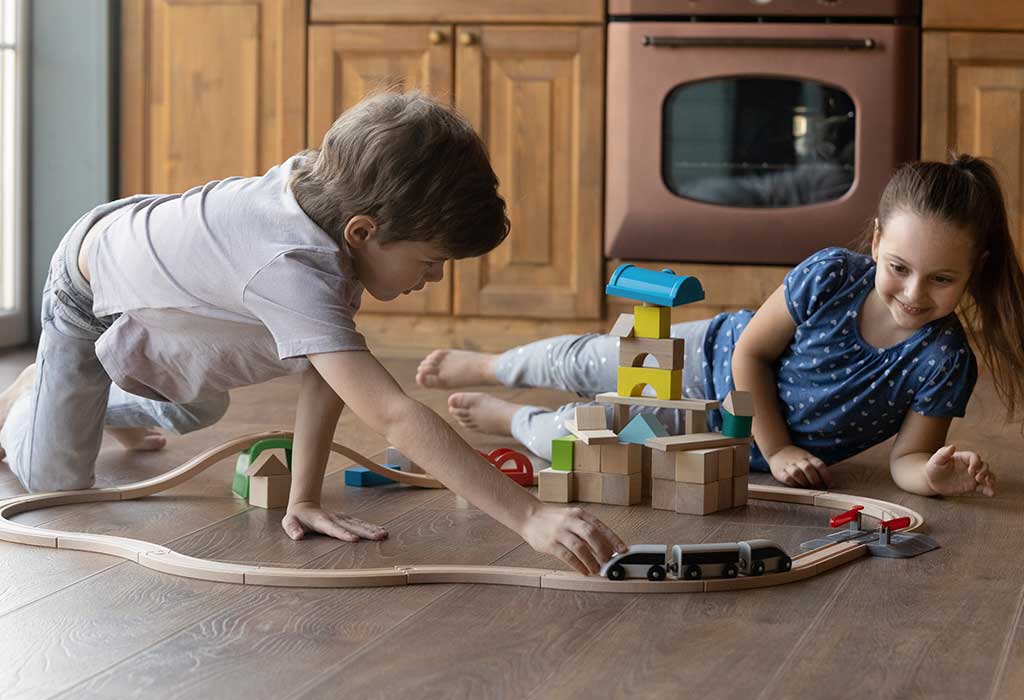 In this Article
Trains have been a popular mode of transportation for people and freight for many centuries now. They are usually the best mass-transit system and also assist in trade. Thus, this series of connected vehicles running along a railway track continues to improve and surprise us with its never-ending capabilities. Irrespective of gender, children often gravitate towards a colorful and clunky train from early childhood. It doesn’t take much time for this favorite toy to become a genuine fixation for your kid too. So, all parents need to enlighten their children about some delightful facts about trains for preschoolers that would direct that interest in trains into a lesson on engineering and a head start in science. The information on the invention of the first train, how a train works, their different varieties, and the usages given below can help children discover more about its revolutionary transportation system.

There are two broad categories of trains that have been invented so far-passenger and freight. Freight trains carry goods while passenger trains carry people.

Freight trains consist of freight carriages that deliver cargo from one place to another. Some are boxcars, while others are special cargoes. Open hopper cars carry coal, covered hopper cars carry grains, tank cars carry liquids, car carriers carry automobiles, and special flatcars carry trailers or freight containers. Facts about freight trains as a more cost-effective and energy-efficient mode of transportation can help kids understand how they carry a lot of weight over long distances faster than any road transportation system.

Passenger trains have cars with seats to carry people over short, long–distances or within cities. They may have a self-powered unit or a group of locomotives. These trains run at a speed of about 100 miles per hour. Passenger trains have electrical outlets and Wi-Fi hotspots, dining cars, baggage cars, and even sleeping cars with beds. Passengers can board or depart from these trains at several depots or stations. They usually run on a set timetable.

The word train originates from the Old French trahiner, derived from the Latin ‘there,’ which means ‘to pull, draw.’ Long before railways, “train” referred to a group of vehicles or pack animals traveling in a line, like a wagon train or camel train. In olden times, trains used horsepower and ran on wooden or iron tracks. With the development of the plateway in the late Middle Ages, a new means was invented to make steam-powered land transport possible. Englishmen Richard Trevithick and Andrew Vivian received a patent for the invention of the world’s first steam locomotive in 1802. In the 1820s British inventor, George Stephenson designed and built the first steam train that carried goods and passengers. Hence, rail lines started being constructed throughout Europe. The first railroads connected cities on the East Coast of the United States. Facts about steam trains that were used to propel boats, wagons, and carriages on tracks built across the United States by 1860 can aid in understanding more about the evolution of trains to more modern Diesel engines as the primary power source of locomotives in the mid-1900s. Facts about Modern Trains have drawn attention to the technological emphasis on faster operations, better amenities, more specialized and larger freight cars, more sophisticated signaling and traffic-control systems for upholding safety, and innovative types of motive power. Undoubtedly, trains today have changed the way people live and operate worldwide.

Other Fun Facts and Information About Trains for Children

Here are some fun facts and information about trains for children to pique their interest and make them more knowledgeable.

There can be more than one reason for parents to invest in a train set for their child. Playing with this toy is hugely beneficial for developing fine motor skills at a young age that helps in writing, drawing, or any other daily activity. Putting the track together, pulling the trains around, operating bridges, turntables and adding extra elements such as people, buildings and animals can increase their imaginative power. Above all, your child not just learns about the evolution and notable bullet train facts but may share a good amount of quality time with parents and friends during pretend play that would improve their social and communication skills and makes happy memories together.