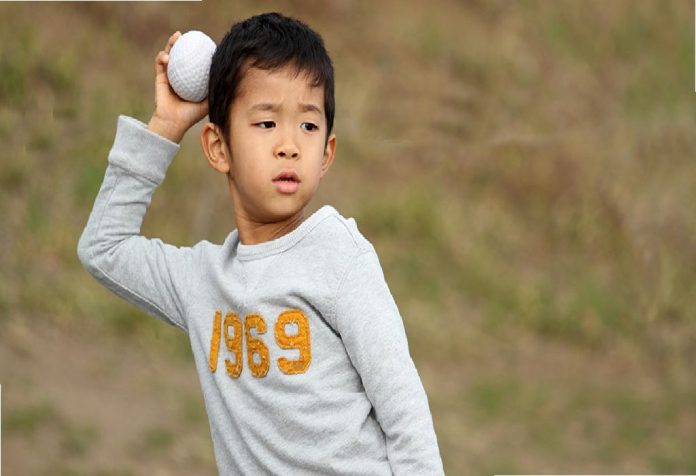 By the time a baby turns into a toddler, most of them are well-acquainted with balls and have even attempted to throw them. However, to be gentle, the ball is usually thrown underhand which goes at a slower speed. When is the right time to teach your toddler to throw overhand shots? Let’s look at how you can teach your child to throw the ball overhand in an effective and safe manner.

What Is An Overhand Throw?

Overhand throw, also popular as overarm throw, is a skill to throw a ball far to make quick accurate hits or passes. It is most often used while playing ball games, such as basketball. Most kids won’t learn and master overhand throw instinctively, as it involves the right application of force, gauging the distance, and throw at the right height. However, teaching your preschooler various fun, engaging activities can help him master the skill of an overhand throw. Usually, 3 to 5 years is the right age to teach your preschooler this skill as most motor and cognitive skills are developed by then. Read on to learn how.

4 Tricks And Activities To Teach Your Preschooler An Overhand Throw

1. Trick To Learn To Throw a Ball Far

Use footprint markers to guide your preschooler throw the ball to a further distance while using overhand throwing skills.

2. Trick To Learn Overhead Throw With The Right Force

3. Trick To Learn Overhand Throw At The Right Height

Now that your preschooler has learnt overhand throw by applying the right force, reaching the right distance, and at the right height, you can hone his overarm throwing skills by engaging him in this fun activity.

Did you teach your preschooler master overhand throw by using any engaging tricks? Share your tricks and knowledge with other moms by leaving a comment below.

Contraindications to Breastfeeding – Can All Women Breastfeed?