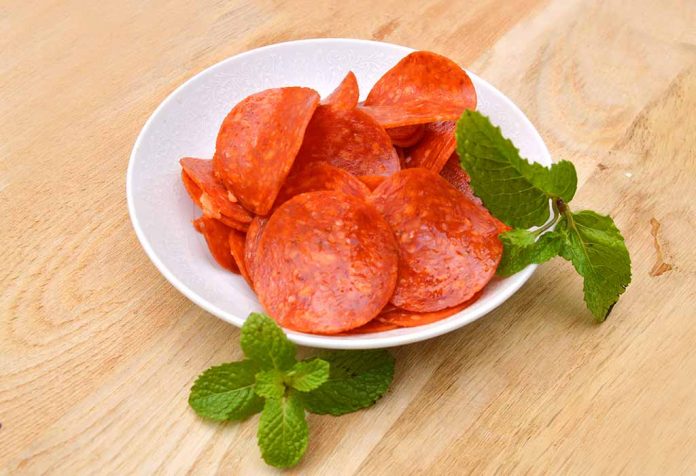 For every woman, pregnancy is the most beautiful and happiest time of her life. However, during this time she needs to be extra careful of her health and nutrition to care for the new life she is creating. She is eating not just for her but for the little one growing inside her as well. This responsibility makes the pregnant women meticulous and conscious of her eating. During the gestation period, pregnant women have cravings for many things. Pepperoni is one such popular food item which most pregnant women crave for its spicy taste. Though they crave for it, they wonder how safe is to eat pepperoni during their pregnancy.  Read the article to know how safe pepperoni is during pregnancy, its benefits and side-effects.

Pepperoni is a spicy variant of salami or dry sausage. This Italian-American variant uses two types of meat –pork and beef for its preparation. The mixture of cured pork with cured beef in a unique spicy blend gives pepperoni its distinct taste. The conventional curing is done by using nitrates or nitrites. The general spices used to spice up pepperoni are cayenne pepper, white pepper, bell pepper, salt, aniseed and allspice. The prepared pepperoni salami looks slightly smoky with bright red colour and is extremely soft. Pepperoni is used in many dishes such as pizzas, pasta, sandwiches and wraps give them a distinct taste.

Can You Have Pepperoni When Pregnant?

Many women have questions regarding pepperoni and pregnancy like is it safe to eat pepperoni during pregnancy. Eating pepperoni is not advisable during pregnancy as it has high fat, added sugar, spices and salt content. The main reason to avoid pepperoni sticks while pregnant is the nitrates and nitrites used for preservation of pepperoni for curing. These preservatives used to react with the meat and can produce some carcinogenic agents. So craving pepperoni while pregnant due to its spicy and distinct taste is normal; however, it should be consumed occasionally after taking the advice of the doctor.

Are There Any Benefits of Having Pepperoni During Pregnancy?

Pepperoni is a good source of essential minerals, proteins and vitamins. Some of the benefits of having pepperoni during pregnancy are:

Side Effects of Pepperoni During Pregnancy

1. Pepperoni due to its high-fat content can cause unhealthy weight gain in pregnant women along with other issues such as gestational diabetes, preeclampsia and heart diseases.
2. The nitrates and nitrites used in its preservation can react with meat to produce nitrosamines, which are carcinogenic.
3. The high spice content used to make pepperoni can cause heartburn and indigestion.
4. Pepperoni has high sodium content, almost 443 gms in one ounce. High sodium may have an adverse effect on foetal renal function.  Also, the sodium can pose the risk of fluctuating blood pressure in the pregnant woman.

Alternatives to Pepperoni That Are Safer

Ways to Eat Pepperoni During Pregnancy

Pepperoni is the popular topping of pizzas, however, there are many other ways in which pepperoni can be eaten. Some of the ways to eat pepperoni during pregnancy are: 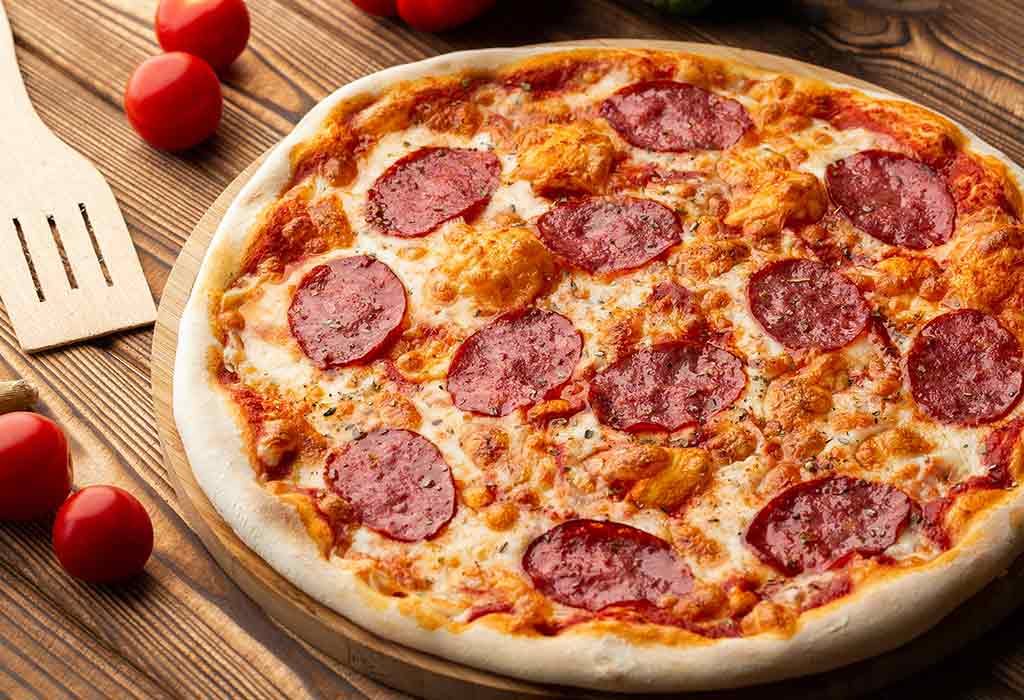 How to Make Pepperoni Pizza

Pepperoni pizza can be easily made at home with few ingredients. However, remember to purchase pepperoni which has no nitrates and nitrite content to avoid pepperoni nitrates pregnancy side-effects.

The common FAQs asked about eating pepperoni during pregnancy are:

Eating raw pepperoni for pregnant women is not recommended. Raw pepperoni may have bacteria and the nitrates present in it can cause toxoplasmosis. Toxoplasmosis can cause congenital disability in the baby and increase the risk of miscarriage or stillbirth for the pregnant woman.

2. Can I eat cold pepperoni while pregnant?

Women can eat cold packaged pepperoni while pregnant when it is mentioned on the package label that it is ready to eat. In the cold or frozen pepperoni, the risk of bacteria is reduced, however, there is still the risk of toxoplasmosis or listeriosis. So it’s advised to eat hot and properly cooked pepperoni when pregnant.

Cold cured meat such as pepperoni has fewer chances of carrying listeria as the freezing kills the bacteria.

4. Is it okay to eat uncured pepperoni during pregnancy?

Pepperoni is cured to preserve it to stop it from getting spoiled. So, if pepperoni is not cured then it may be carrying bacteria, hence unsafe to eat.

5. Is turkey pepperoni safe during pregnancy?

Pepperoni made from fresh turkey meat is safe to eat by pregnant women provided it has no preservatives like nitrites or nitrates used during its preservation.

6. Can I have Hormel pepperoni when pregnant?

It is best to avoid Hormel pepperoni during pregnancy. It contains a high amount of added sugar, sodium content, saturated fats and is made by using nitrite preservatives.

Pepperoni is advised to eat occasionally and in small quantity during pregnancy as overeating pepperoni in large quantity can lead to health issues. Pepperoni has certain health benefits, however, due to its spices and uses preservatives content, its best to avoid during pregnancy. In case there is a strong craving to eat pepperoni then have it properly cooked, hot and in limited quantity in consultation with the doctor.

Eating Egg During Pregnancy
Consuming Tuna While Pregnant
Is It Safe to Eat Bacon in Pregnancy?

Wheat Allergy in Babies – Symptoms and Ways to Deal With It

How I Transform TV Time Learning Time for My Toddler