Home Pregnancy Diet & Nutrition Is it Safe to Consume Flaxseeds During Pregnancy? 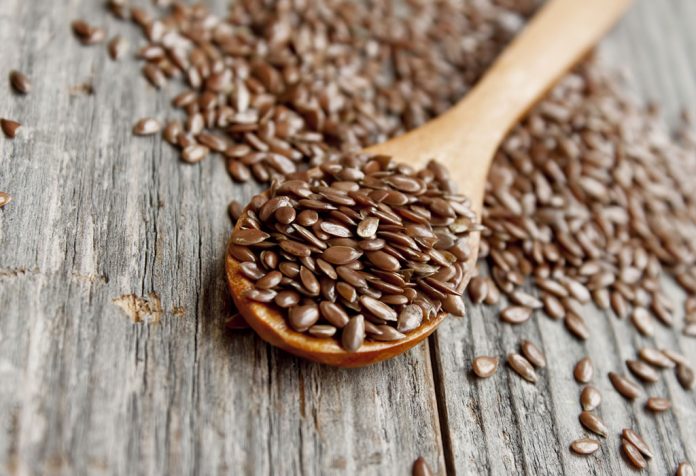 Flaxseeds are borne by the flax plant that grows in Europe, Asia, and the Mediterranean. Flaxseeds are an effective laxative and are known as ‘alsi’ in India. Flaxseeds are rich in magnesium, potassium, protein, zinc, Vitamins B6 and E. Flaxseeds even contain an omega-3 fatty acid, known as alpha-linolenic acid, which can help lower cholesterol levels and cure inflammation. Due to their high fibre content, flaxseeds even help in regulating blood glucose and cholesterol to a great extent.

Every 100 grams of flaxseeds contains 534 calories. This means that when you consume one tablespoon of whole seeds (approx. 10 grams), your calorie intake would amount to 55. Flaxseeds contain 42% per cent fat, 29% carbohydrates, and 18% protein. Almost ninety-five per cent of the carbohydrates in Flaxseeds is fibre, which is 20% to 40% of soluble fibre and 60% to 80% of insoluble fibre. It is this combination of fibre that makes it a natural laxative and promotes digestive health.

Is it Safe to Eat Flaxseeds During Pregnancy?

Pregnancy is a delicate time hence you will have to be careful about your diet and eat only healthy foods to make sure your little one grows healthily. There are divided opinions in the medical community about the utility and safety of consuming flaxseeds during pregnancy. If you are wondering whether or not you can eat flaxseeds during pregnancy, then the answer is NO. Consumption of flaxseeds in large quantities can prove to be harmful to the foetus, hence they are best avoided.

Flaxseeds contain linoleic acid, alpha-linolenic acid or Omega-3 polyunsaturated fat. These are essential during pregnancy since they aid in the brain development of the foetus, especially during the first few months of pregnancy. Being a good source of fibre, flaxseeds can help keep blood sugar levels in check, which can be beneficial for women with gestational diabetes. Furthermore, consuming flaxseeds may also prevent constipation during pregnancy, which is a common problem faced by pregnant women. However, the side effects of flaxseeds outweigh their benefits, hence they are best avoided during pregnancy.

Side Effects of Eating Flaxseeds

As mentioned before flaxseeds are not safe for consumption during pregnancy. If consumed in large quantities, they can cause potential damage to the health of the baby. Read on to know about the side-effects of eating flaxseeds during pregnancy.

How to Include Flaxseeds in My Diet

Doctors do not recommend the ingestion of flaxseeds in its raw form since it contains minor amounts of cyanide. The best way of including flaxseeds in your diet is to roast them as it destroys the cyanide compounds present in it. While it is best to not include flaxseeds in a pregnancy diet, if you still want to consume them in moderate amounts, here is what you can do.

You can grind the seeds to make powder. You can add this powder to smoothies or to yoghurt to avoid direct consumption. You can use the flaxseed powder to garnish your salad or your morning cereal. But do check with your nutritionist before adding them to your diet. And store flaxseeds in an airtight container to retain its freshness and keep it crisp. How Many Flaxseeds Can I Consume While Pregnant?

Flaxseeds must be consumed in moderation during pregnancy, keeping in mind that the requirement for alpha-linolenic acid (ALA) is about 1.4g/day. This means you should not consume more than one tablespoon of freshly ground flaxseeds. Flaxseeds are common ingredients in our daily diet like bread and bakery items but you must check with your doctor before making them a part of your diet.

Remember, flaxseeds are not safe for consumption during pregnancy. The side effects of flaxseeds outweigh their benefits, so it’s best you avoid them. If you do want to eat them, take them under medical supervision and in moderation. Eat healthy and go for the safest options and welcome a new life into your world without fear!

Handy Tips for Washing a Teddy Bear at Home Easily

Co-Parenting: The Equal Responsibility of Both Parents to Look After Their Child