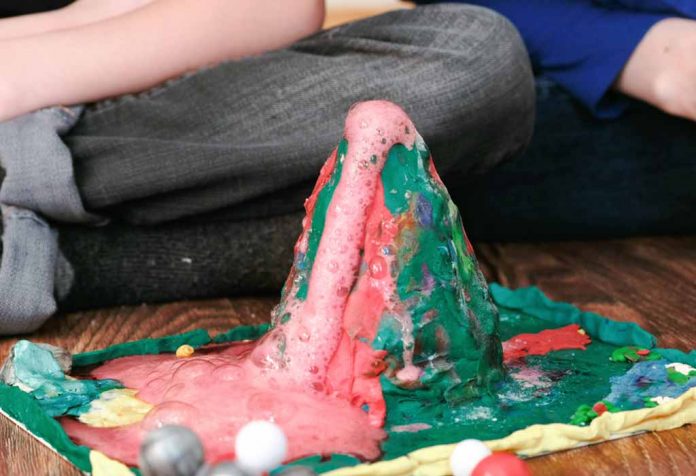 Making a volcano is one of the most common science experiments that kids can do! No matter how many times it is made, it is a wonderful sight to behold when it is complete and works right. Your child will be left feeling satisfied and accomplished, especially after learning how to make a volcano erupt.

Volcanoes are hollow mountains that do not have any tops. You can look down into the volcano, and find a pool of hot, molten rock. There are many dormant volcanoes, but there are also many around the world that are still active. When they erupt, they shoot lava, rocks, and gases, which can cause a lot of air pollution.

There are two types of magma. Some have low content of silica, and these are more flow-y, and the accompanying gases are able to escape freely. The other type has high silica content, is not as flow-y. Gases that are trapped in here are not able to escape easily.

How to Make a Volcano – Step by Step Instructions for Children

There are so many different ways to make a homemade volcano. Some are complicated, and some are easy. Here are some very easy to follow, step by step instructions on how to make a volcano. Just make sure that you perform this experiment outside! That way, you can avoid having too much to clean up.

Observations During the Experiment

By doing this experiment with your child, you can teach him all about how volcanoes work. Your child will soon become an expert on volcanoes and other such cool geological formations!

Inside A Disney Cruise Ship – It’s A Dream!

Eating Chyawanprash during Pregnancy – Is It Safe?

Things to Do When Your Baby Starts Walking on His Little Toes!