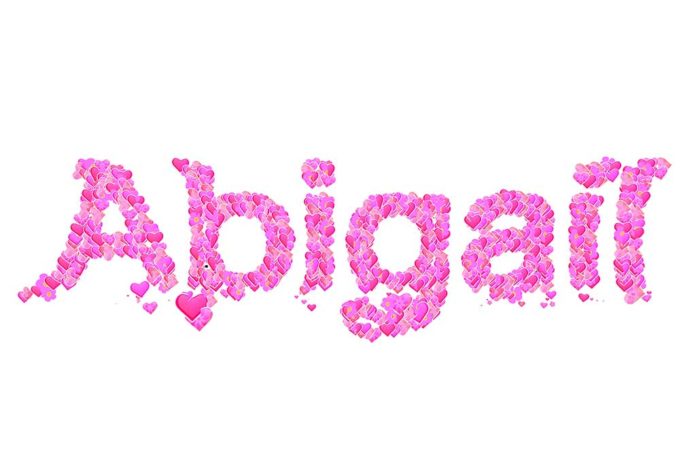 Abigail is a girl’s name of Hebrew origin, meaning “my father is joyful.” Derived from the Hebrew name Avigail, it consists of the Hebrew elements ab, meaning “father,” and g-y-l, meaning “to rejoice.” Abigail was the beautiful and prophetic third wife of David in the Old Testament. In the early nineteenth century, Abigail was a term used for a maid. As the Biblical Abigail describes herself as King David’s handmaid, it’s a name bestowed upon ladies’ maids in literature.

What Does Abigail Mean?

Derived from the Hebrew name Avigail, the meaning of Abigail can be understood to be “my father’s joy” or “cause of joy” in Hebrew. It can be interpreted to mean ‘my father is exultation’ or “my father’s joy.” Abigail, as a girls’ name, represents wisdom.

Abigail is primarily a female name of Hebrew origin that means ‘Joy of The Father.’ With deep biblical ties, Abigail’s history spans back centuries, appearing in the Bible as the wife of Nabal and King David in the Hebrew Bible’s Book of Samuel. When her foolish husband offended King David and was about to bring disaster on their household, Abigail acted with sound judgment and diplomacy by approaching King David to prevent bloodshed. She was highly praised for her intelligence and loyalty.

Abigail name variations are popular among parents who appreciate the cultural differences of other nationalities that have produced names in other forms. Here are a few other spellings for Abigail that offer parents an array of choices in their name selection process.

How Popular Is the Name Abigail?

After entering the Social Security List of top 1,000 names in 1901, the Abigail name ranking was 918. However, it fell off the list shortly after, only making a comeback in 1939. The name began to trend by 1970, after which it fell dormant for the next few decades. It was only during the late 1980s and 1990s that the Abigail popularity index made a resurgence in the US Top 100 names for girls. Later, the Abigail baby name ranking reached the Top 10 in 2001 and peaked in popularity, ranking at 4 in 2005 and 13 in 2020. Among the famous Abigails in American history are Abigail Adams, the intelligent and resourceful wife of John Adams, and Abigail Williams, one of the main accusers in the Salem witch trials. Abigail also appears in Arthur Miller’s play ‘The Crucible.’ First ladies Abigail Adams and Abigail Fillmore, along with actress Abigail Breslin have given this name a shot in the arm in terms of its popularity.

Search trends data reflects an incredible interest in Abigail, recording a popularity score of over 50 for the last ten years and reaching 100 on two instances – November 2015 and December 2015. The lowest value recorded was 41 on the two instances of March 2012 and June 2012.

Interest in Abigail – US

Search trends for the name Abigail have recorded consistent search popularity of over 30 reaching 100 in October 2021. The lowest value was recorded was at 33 in June 2012.

Popularity of the name Abigail

Search trends of Abigail in the US

Massachusetts has led the search trends among the sub-regions of the US for the name Abigail over the last ten years. New Hampshire, Maine, Vermont, and the District of Columbia have secured a place in the top 5 positions.

Middle Names That Go With Abigail

Here are some of the gorgeous double names with Abigail that might sound fashionable and work well as middle names:

Celebrities often serve as role models who positively inspire the baby-naming trend. Here are some popular personalities called Abigail who have achieved stardom and fame through outstanding achievements.:

Baby names like Abigail are classic choices with a modern touch. Family names for Abigail can give clues about the ancestry and enhance the reputation of your child. Here are some of the other names for Abigail that retain the similar feel of the original name.:

Names that rhyme with Abigail can bring a poetic flair into the mix. A traditional Biblical name like Abigail can be modified in a trendier way to capture its magic:

You can match delightful sibling names together to establish a pattern and appear as a loving family. Here are some of the best sibling names that go with Abigail to feel like a natural addition to the sib set despite their differences:

Both common and creative nicknames are a reflection of your relationship with your child. Nicknames for the name Abigail may radiate warmth yet tickle your funny bones with their playful vibes.:

With a meaning as exuberant and cheerful as ‘the father is rejoicing,’ there’s no doubt parents that the arrival of little Abigail would bring great joy. Its sensible overtone and air of maturity have made a name like Abigail a favored choice among parents for many decades and years to come.

Make your Orgasms Stronger with Kegels

Hair Pulling in Babies – What You Can Do