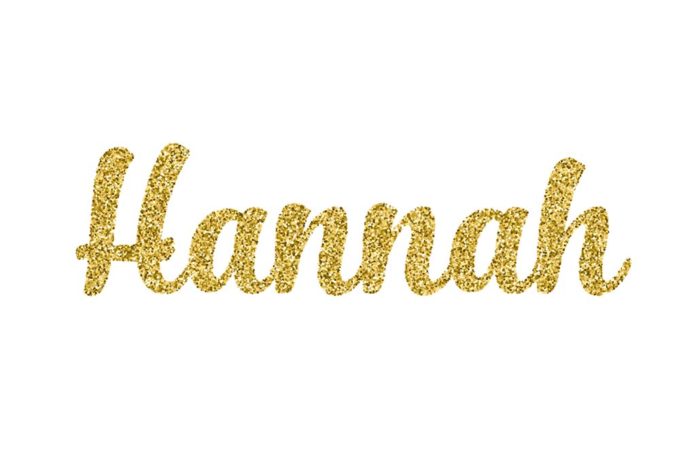 Derived from the Hebrew name Channah, Hannah means “favor” or “grace.” Hannah is a religious name used both in Christianity and Judaism. This biblical name appears in the Old Testament. It has various spellings that have roots in Arabic, European, and Asian languages as well. The Greek and Latin version of Hannah is the popular Anna.

What Does Hannah Mean?

As per the Hebrew tradition, Channah or Chana and Hannah is the English version. This name represents the pleasing elements of divine favor and grace, and the meaning of Hannah is “God’s favor” or “Grace” as per its Hebrew roots. Its Scandinavian, Slavic, and German form is Hanna. After her womb was closed by Lord, Hannah was left barren but steadfast in her devotion. She diligently prayed to Him for a child and in return promised to ‘give him to the Lord all days of his life.” Her son Samuel later became a prophet and led the Israelites against the Philistines. Thus, it rightly means ‘God has favored me with a child.’

Romanized from the root á¸¥-n-n, Hannah means “God’s favor” or “grace” in Hebrew. It was not until the Puritans in the 1600s that Hannah started being commonly used as a first name and steadily began to be used in the 17th century. The spelling of Hanna without the second “h” at the end is most common among Northern and eastern Europeans. Classic and timeless in its elegance, this name has remained popular in the U.S. name charts since its debut on the list in 1900.

Name variations are alternatives or equivalents of a name that differ in its external form. Here are some of the substitutes of Hannah name variations derived from other languages and other spellings for Hannah in those languages:

How Popular Is the Name Hannah?

In the late 1990s, Hannah popularity peaked significantly to hold the No. 2 spot for three years in a row and remained in the top 10 most popular names for over a decade. In 1998, Hannah raced ahead of Sarah as one of the most used biblical girl names, only to fall behind Abigail and Elizabeth. According to Social Security Administration data, Hannah baby name ranking has remained within the top 35 names since 2000. It has even stayed in the top 5 from 2000-2004. Having dominated the pop culture from 2006 to 2011, the main characters of popular TV shows like Hannah Montana, 13 Reasons why, and Girls are named Hannah. Despite some dip in popularity in recent years, it is the 39th most popular name for girls as of 2020.

As per the data collected, consistent search popularity of over 40 has been recorded through the decade-long observation period, with interest among individuals reaching 100 in August 2013. The lowest value was, however, recorded at 35 in September 2017.

Interest in Hannah – US

As per the search trends for Hannah, the average popularity of over 35 was recorded over the last ten years, reaching 100 in July 2019. It scored the lowest popularity of 30 on Dec 2017.

Popularity of the name Hannah

Sweden tops the list concerning interest for the name in the past 10 years. United Kingdom, New Zealand, United States, and Ireland compete to stay in the top four names after Sweden. This concise Christian name with a meaning that represents power, positivity, and confidence makes it immensely popular in the US for parents.

Search trends of Hannah in the US

Vermont is the sub-region in the US where the name Hannah has been searched the most over the past 10 years. New Hampshire, Oregon, Massachusetts, and Nebraska are the top 5 cities where search trends for Hannah have been registered to be the highest.

Middle Names That Go With Hannah

The tradition of giving middle names started in the Middle Ages by the Europeans. Here’s a quick glance of some of the most creative double names with Hannah that wouldn’t get lost in the mix:

Celebrity names often set the trends for the year’s coolest baby names. Here are some of the most popular personalities named Hannah that can upgrade your child’s glamorous appeal.

Baby names like Hannah are connected via style and quality. Family names for Hannah need to be suitable to make the full name sound fluid and attractive. Here are some other names for Hannah that would uphold its sophisticated appeal.

Names that rhyme with Hannah can sound melodically closer to the classic name. Here are some names that sound twice as nice as Hannah:

Names for sibling sets are chosen to strengthen the bond and sweeten the relationship between them. Here are some of the perfect sibling names that go with Hannah:

Funny, witty, and adorable shortened forms of Hannah can be suitable for calling your daughter or any other close acquaintance with the name in informal situations. Here are some of the most delightful nicknames for the name Hannah that can be considered:

With the latest trend of selecting unique and unusual names, Biblical names like Hannah might have gone down in terms of popularity as they once were. Thus, with roots in many cultures, from Hebrew to Arabic, European to Asian, this soft, gentle, homey name with an aristocratic image is widely used even today.

Smart Bookcase Design Ideas to Show Off your Books

20 Helpful Tips to Prepare for a Normal Delivery

A New Perspective to Christmas!