A 5-Year-Old Boy From Chandigarh Was Kidnapped. How These Domino’s Guys Saved Him Will Make Every Mom Bless Them!

A 5-Year-Old Boy From Chandigarh Was Kidnapped. How These Domino’s Guys Saved Him Will Make Every Mom Bless Them! 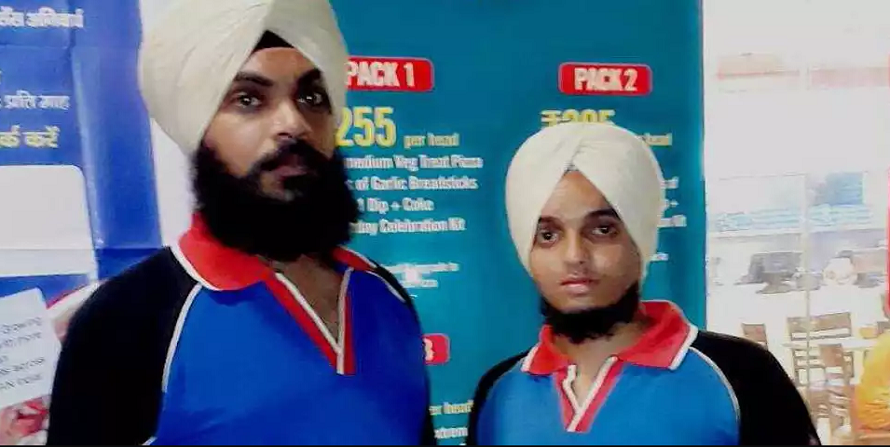 It was an ordinary weekday-night for colleagues Harpreet and Surender, two pizza-delivery boys working for a Domino’s pizza outlet in Zirakpur, near Chandigarh. Just as they were about to shut shop for the night, one of the customers walked in to inform the boys about a rather weird incident.

Someone driving a Duster car had just dropped off a small boy in front of the outlet.

“It was around 10.45pm.” Harpreet said. As he and his colleague Surender approached the boy, they found out he was crying. They quickly brought him inside the outlet, and took it up on themselves to solve the issue.

After bringing the small boy in, Harpreet and Surender started contacting people in the vicinity of their Dominos outlet. However, in the midst of all this, they noticed that the boy was carrying his father’s bank passbook.

“The passbook had details of the boy’s father – his personal information and contact details,” Harpreet revealed.

However, when they tried to contact the family, there was no response from the other end of the line.

While an ordinary person would have simply handed the child over to the police, after a failed attempt to contact the family of the child, Harpreet and Surender displayed great presence of mind and quick thinking. They thought of searching their own customer database, to check whether the boy’s family were Dominos customers.

“When we entered the number in our database, we found that the family once bought pizza from our company outlet in Sector 20, Panchkula!” Harpreet said.

They say intuition always comes to your rescue when you need it the most. These two colleagues sensed something was wrong in how such a small boy had turned up in their locality at such an odd hour of the night. When they discovered that the family had ordered pizza from the Sector-20 Dominos outlet, Harpreet and Surender figured the family perhaps lived there and decided to take the boy there.

And So The Boy Was Reunited with His Parents

When the two boys arrived at the Sector-20 police station with the abandoned child, to their immense relief they discovered that the child’s parents waiting there!

Within 35 minutes, a small kidnapped boy was reunited with his parents, due to the efforts of two pizza-delivery boys.

THIS is How The Kidnapping Took Place

After the kidnapped boy was reunited with the family, the entire timeline of the incident was revealed.

The family – mother, father and son – had stepped out to get some ice-cream for the boy in their car. On arriving at the ice-cream parlour, the mother Jyoti, who is a lecturer at Chitkara University, stepped out of the car to pick up the ice-cream. That was exactly when a youth held her at gun-point, hopped into the car and drove away.

Jyoti suffered bruises on her arms. She said, “It was dark so all I could see was a man in his 20s in a white shirt pointing a gun at me. He warned me against raising the alarm.”

Manish Kumar, the boy’s father, added, “The SUV keys were in the ignition. The youth simply got in and drove off in a fraction of a second.”
We do not know for sure if it was the intention of the youth to kidnap the little boy. But when he found the child in the car, he randomly dropped him off in front of the Domino’s outlet in Zirakpur – the one where Harpreet and Surender were working.

“We deliver pizzas everyday. It was quite relieving and satisfying to hand over a kidnapped boy safely to his parents.” Harpreet said, talking about the incident later.

What We Must Learn From This Kidnapping Case

The courageous act of Harpreet and Surender was duly noted by the Domino’s Pizza’s Punjab circle head Jatinder Sharma, and the HR head Mohsin Saifi. Not only were they congratulated for their efforts, but the company also brought the two delivery boys in the limelight by sharing their picture and the story on their social networking platform.

A look at the statistics on missing children will help you duly appreciate Harpreet and Surender. According to the Union Home Ministry Data, around 180 children go missing in India every single day. As of 2015, there are 62,988 children missing in the country.

What Can We Do About it?

Well, we must make note of the following safety tips for children and put them into practice every single day:

Previous article « If You Shave or Wax Your Body Hair, You Must Know These Important Facts
Next article 7 Easy-To-Follow Fashion Tricks To Hide Your Post-Pregnancy Belly »