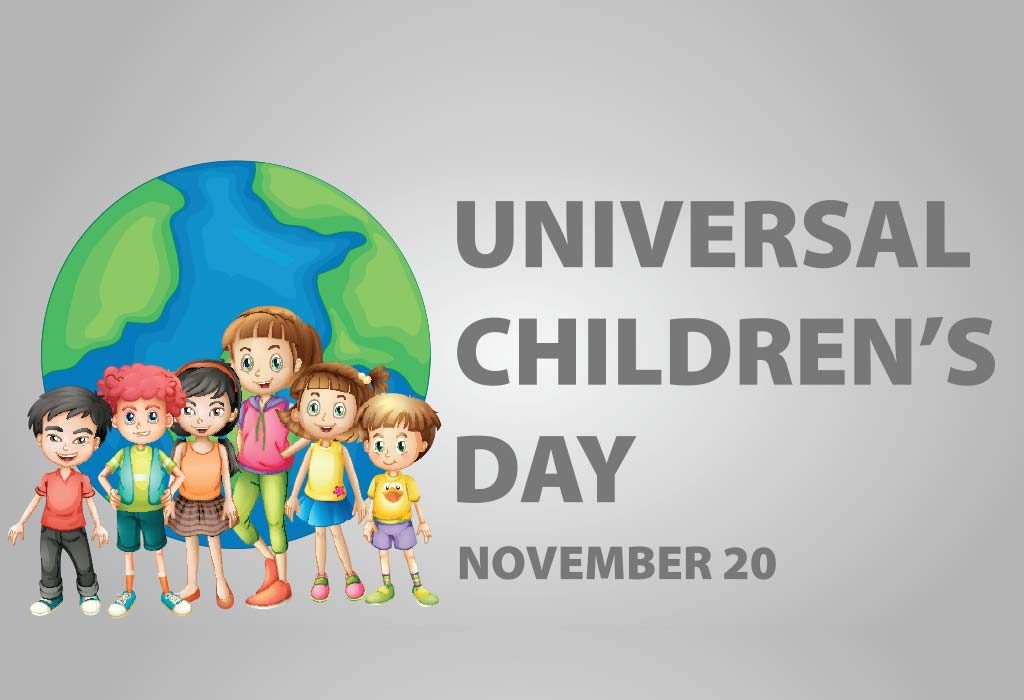 It’s that time of the year again; the time that kids look forward to the most; You guessed right, it’s Children’s Day! With this fun-filled occasion upon us, you’re probably wondering how you can celebrate with your munchkins. But before we get into the celebrations, does your child know why this day is celebrated and how it came to be? Read on for some fun facts on Universal Children’s Day, right from history, themes, and more. Not to forget, of course, some interesting ways to celebrate the occasion with your loved ones.

When Is Universal Children’s Day Celebrated?

The UN General Assembly first announced the concept of Children’s Day in 1954 to bring children of all races, castes, and creeds together and for the welfare of children across the world. UNICEF World Children’s Day celebrates the youngest minds of the world by encouraging brotherhood and fraternity and highlighting the importance of the well-being of children. Over the years, Children’s Day around the world has promoted a number of causes, such as eradicating HIV/Aids, promoting the education of all children, and more. On November 20th 1989, the UN General Assembly signed a treaty to protect the social, civil, economic, health, cultural, and political rights of children to deal with child-specific needs for children across borders and act in their best interest. Universal Children’s Day is a huge part of the work carried out by UNICEF (United Nations Children Fund) to raise awareness of the welfare of kids around the world. Here’s why this is more than just a holiday.

1. Children Are the Future

Today’s kids are tomorrow’s world leaders, healthcare providers, inventors, and more. Ensuring a safe and positive future for the world starts with educating and caring for the kids of the present, which is the goal of Universal Children’s Day.

2. Focuses on the Rights of Children

It is a general assumption that the rights of people are given to adults. However, the UN focuses on the rights of children by signing treaties and documents that guarantee medical care, education, and protection from violence and discrimination, among others, for children.

3. Spotlight on Problems Faced by Children

Whether or not these problems are evident as you go through life, children in lower economic areas suffer from various financial and health problems and don’t have access to education or medical opportunities. Universal Children’s Day reminds people not to overlook these issues and to join the UN in taking steps towards eradicating them.

Things You Can Do on Universal Children’s Day

There are a number of Universal Children’s Day activities you can do along with your kid. Ask your child if he has any particular activity in mind. After all, it’s his day. If not, here are some fun ideas to help you get started.

Go shopping with your kid and grab a meal afterwards to spend time with him and pamper him. Kids love new clothes and toys, and of course, the opportunity to eat some yummy outside food, so you’re sure to have a blast together.

There’s nothing like making a donation to a cause for World Kids Day. Include your child in the process, so that he understands the importance of helping those in need from a young age.

3. Take Your Kid to the Zoo or Park

Visit a nearby zoo or park with your little one. Kids love animals, and you could also sneak in some fun facts about the various animals and birds you spot. 4. Spend Quality Time With Your Kid

Spend the day bonding with the kids around you. Play with them, cook some yummy food, and take them to the movies, beach, or some outing of their choosing.

There’s nothing like spending a few hours doing something creative with your child. You can bond over making some creative decorations or pieces to display at homes, such as frames, pinwheels, and more.

6. Have a Movie Night

Movie night calls for popcorn, pizza, and an interesting movie with kids at the centre of it. Choose some cult favourites like ‘Mr. India’, ‘Slumdog Millionaire’, ‘Home Alone’, and ‘Little Miss Sunshine’ or latest ones like ‘The Sky is Pink’ and ‘The Addam’s Family’. Universal Children’s Day has a unique theme each year to focus on a certain aspect of their efforts and highlight pressing issues. The theme for this year is “A Better Future for Every Child”.

The theme puts emphasis on children’s education rights. It urges the public and government policies to advocate, promote, and celebrate children’s right to education. With better education, children grow up to be their best and contribute to the economy positively. No information is complete without some fun facts and trivia. Here are some Universal Children’s Day facts to share with your kid.

2. Children’s Day is a national holiday in some places, like Turkey and Argentina.

3. Children’s Day is celebrated on 14th November in India to pay respect to Jawaharlal Nehru, the first Prime Minister of India, who was immensely fond of kids.

4. Australia celebrates ‘Children’s Week’, starting from the Saturday before Universal Children’s Day and ending on the following Sunday. Here are some interesting Children’s Day quotes that perfectly encapsulate what this day is about.

1. Every child comes with the message that God is not yet discouraged of man.’- Rabindranath Tagore

2. ‘Children are the world’s most valuable resource and its best hope for the future.’- John F. Kennedy

3. ‘Make it a rule never to give a child a book you would not read yourself.’ – George Bernard Shaw

4. ‘A child can ask questions that a wise man cannot answer. ‘- Anonymous

Happy Universal Children’s Day to all the kids around the world. This year, share this information with your child and let him know about the matter of his rights. And, of course, take a day off and celebrate this day with your little one to make him feel special. After all, your time is the most valuable gift you can give your child!