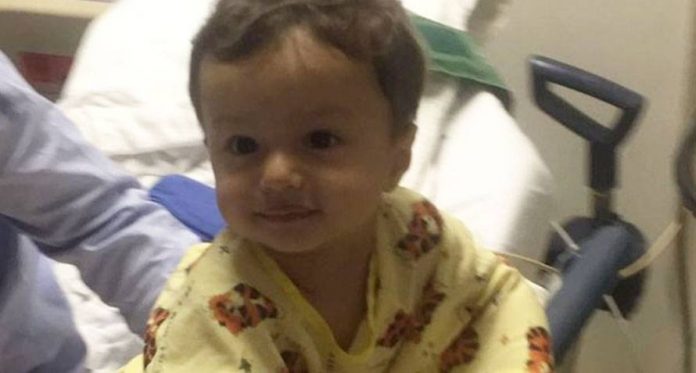 No one knows love quite like moms do. Their baby is their life and they do everything in their power to keep him safe. But are you sure your precautions are enough? Could your baby still be at risk for something that threatens to snatch him away from you? The horrifying experience that this ten month old baby and his mother went through will force you to reconsider every precaution you take for your infant.

Little Laith was spending the day at his grandmother’s home. He was crawling happily, all well with his world. And then suddenly, he started coughing. His mother Jude immediately went to check on him, assuming it was just a usual cough.

But nothing about that morning was usual anymore. It rapidly turned frightening.

Laith was struggling to breathe. He had turned blue and his mouth started to froth. His eyes were rolling. He looked in great pain and Jude’s heart almost stopped seeing her baby in this condition.

Immediately, Laith was taken to the hospital and given oxygen. He recovered a bit but still found it difficult to eat or drink. Was it possible that something was stuck in his throat? The staff conducted an X-Ray to confirm this – but it came back clear. Over the next few days, Laith had a fever and poor appetite but otherwise seemed to be gaining back his health.

But this was not to be.

His mother soon realised that there was something seriously wrong when she sat down to feed him solid food. Though Laith chewed his food, it quickly regurgitated. The food would come back into his mouth. The doctors attributed this problem to tonsillitis, or an inflammation of the tonsils in the throat. This is not a grave problem and easily rectified using local anaesthetics to help the patient swallow. For a while, Jude did as the doctors said.

“Although I wasn’t convinced, I tried the spray and Laith still struggled to swallow. I thought it best to give him a break from solids and started only giving him pureed soups and milkshakes.”

But a mother’s heart is more intuitive than the biggest team of doctors. Jude felt it somewhere that something was very wrong with her baby. Something that the doctors hadn’t been able to put their finger on. Laith kept regurgitating more food. He sometimes did it right before bedtime. Jude lived in the constant fear that he could choke on his food in his sleep. His X-Rays continued to be clear. But he continued to be in pain…

And then finally, it was an operation and a close investigation of the oesophagus that identified the problem. The real reason that was causing Laith all the discomfort and putting his life at risk is beyond shocking.

“On Saturday, 13 August, Laith was operated on, and a plastic angel, measuring almost 2cm, was found in his oesophagus. I am still so traumatised by the whole experience. Ultimately, I shouldn’t have had to chase after medical providers for answers. The duty of care given to children and babies should never be compromised. My child should not have had to suffer in such discomfort for as long as he did.”

The most horrifying part of this parent’s experience is that it can happen to any of us! It can happen despite the best precautions. As moms, we babyproof our house and keep choking hazards away from our baby, but somehow, incidents like these catch up on us unaware. If not diagnosed on time, or mis-diagnosed like in Laith’s case, we may have to pay the price with our baby’s life. Laith suffered through this for two weeks. We shiver at what could have happened had the toy been stuck in there longer. The shock and heartbreak of seeing your darling in such severe trauma can taint you for life.

We urge you to be extra careful around your kids and also instruct your caregivers, family members, etc. to do so. Do not keep any small objects in your baby’s presence. They love putting everything inside their mouth and you cannot risk this. Be wary of symptoms such as difficulty in breathing or swallowing, loss of appetite or fever. If you suspect something is wrong, don’t delay in visiting your doctor and getting all necessary examinations performed at the earliest.