Home Preschooler Education Teaching Prepositions of Position to your Preschooler 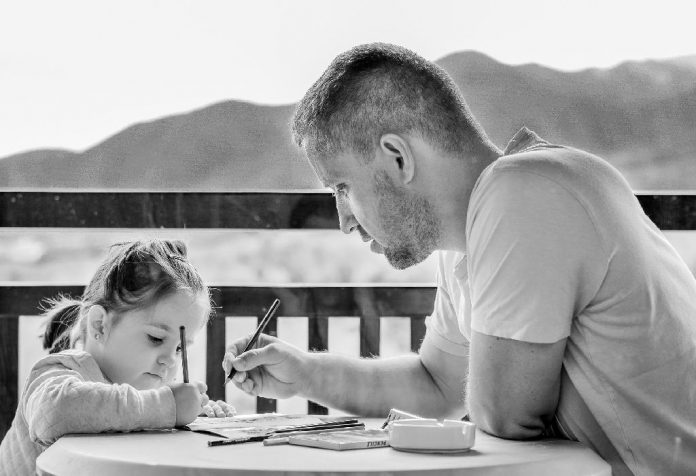 At this age, your child is still too young to understand many constructs of grammar. However, prepositions are the simplest to understand as they involve position, movement and action – something kids love doing!

Prepositions are words that usually describe the relationship between a noun and the remaining sentence, wherein the relationship is usually that of location or position. Your child is already using them when he asks you to hide inside the laundry basket, for instance! Getting them an early start in this teaching lays a strong foundation for their subsequent English language training.

Here is the complete list of important prepositions of position your pre-schooler needs to learn. Use simple sentences as suggested to explain their meaning

The little one loves hiding behind the curtain but he forgets Mamma is right in front of him!

2. On The Right/On The Left

Where does he keep his lovey with respect to the bed? On the left or on the right?

How far from his home is his daycare? Is it near Mamma’s friend’s house? Or is it close to the ice-cream parlour?

What’s under the bed? What’s on the kitchen counter? What’s in the wardrobe? The kitten, of course!

What lies next to your darling’s bed? The night-stand with his glass of water.

The blue sky lies above. But down below live worms!

Where should we keep the garbage? Inside or outside the bin?

What lies right opposite the playground? The grocery store where Mamma buys chocolates!

Lessons are learnt well when they are taught in a fun manner! You can use some of these tried and tested ways to teach prepositions. They are easy to do but very effective!

Bold, high contrast flashcards with the prepositions clearly illustrated help your kids retain them in memory.

2. Make a drawing or craft activity out of it

Why not get the kids to make their own drawings of prepositions? Say, a ball resting inside a box, both of them bright blue? Colours have a way of helping us remember things.

The illustrations in the books are cute and colourful and get the message across very well. One of the best books for prepositions is “Where’s Spot” by Eric Hill. This naughty puppy keeps hiding everywhere!

Head Shoulders Knees and Toes is a classic song wherein your child will point to each body part. Emphasise the prepositions everywhere – so, the nose is between the eyes, for example.

One of the most popular prepositions games is “Normal or Strange?” Create funny preposition placements and ask your kids – “Is this normal or strange?” For instance, say “The monkey is under the cage”, or “Your shirt is below your pants.” Quite fun!

Teaching prepositions is going to be an uphill ride for you that will need patience, understanding and the willingness to get creative. Kids will make mistakes so do not be too harsh or nitpick too often. With time, they will become experts in the language!

Hashi, the Dog and Nirvaan, Grow Up Most Beautifully

Postpartum Life Challenges and Ways to Deal With Them