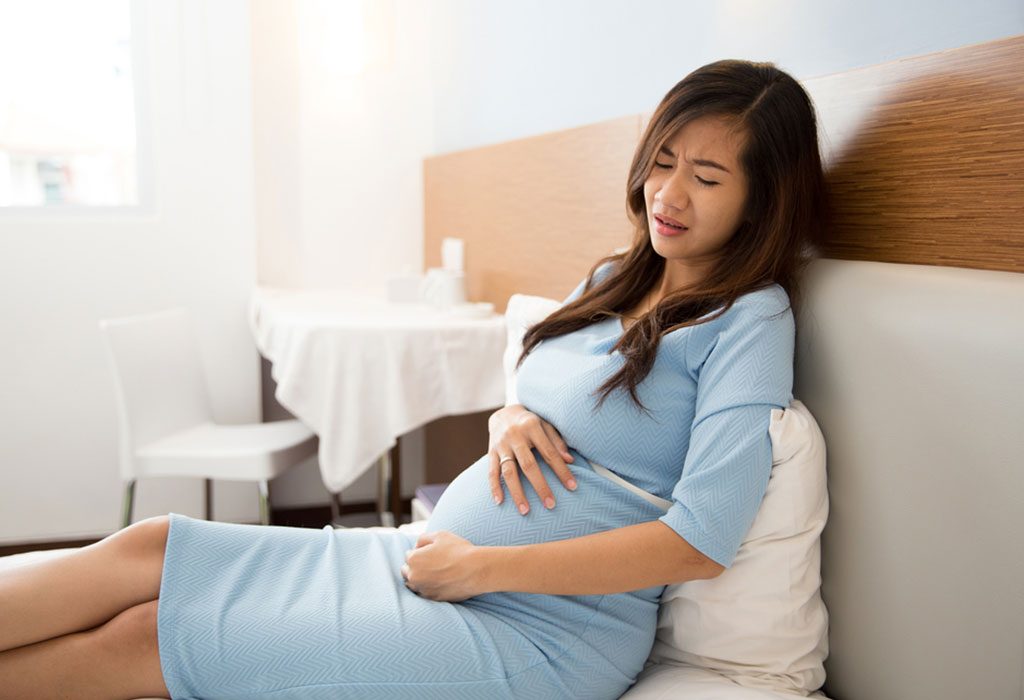 Is it Normal to Experience Abdominal Pain While Pregnant?

Most expectant women experience abdominal pain or cramps at some point in the nine months of their pregnancies. If you experience abdominal pain during pregnancy, you need not panic, as most of the time it is normal. As you carry your baby in the womb, the extreme pressure on the muscles and joints can make your belly feel uncomfortable at certain times and you might experience stomach pain. It is normal for pregnant women to have mild abdominal pain during early pregnancy. However, any severe or sharp pain in your abdominal area is a matter of great concern. If the abdominal or stomach pain persists for longer or is severe, it could be an indication of a severe pregnancy-related complication and you must consult a doctor immediately.

1. Abdominal Pain in the First Trimester of Pregnancy

During your first trimester, you may experience cramping pain in your abdomen, which occurs as your baby develops. Cramping is experienced during the expansion of the uterus, which causes the supporting ligaments and muscles to stretch. Cramping during pregnancy is considered normal and can also occur due to other causes including gas and bloating, constipation, or sexual intercourse.

Women, who have undergone IVF treatment to get pregnant can be diagnosed with a condition called ovarian hyperstimulation syndrome (OHS), which results in abdominal pain. This pain is mainly caused due to the over-stimulation of the ovaries by the fertility drugs. This pain usually lasts for a few weeks of pregnancy.

2. Abdominal Pain in the Second Trimester of Pregnancy

3. Abdominal Pain in the Third Trimester of Pregnancy

During the third trimester, you may experience pain in different parts of your body including the abdomen, back, and hips. In preparation for childbirth, the connective tissues in your body will loosen; thus, enhancing the flexibility of your birth canal. Most pregnant women experience pain in their hips or lower back due to loosening and stretching of the connective tissues. Abdominal pain in the third trimester can also be experienced because of the following.

Pregnant women often complain of gas and constipation problems during pregnancy. These problems arise primarily because of an increase in the levels of the progesterone hormone. With the increasing level of this hormone, the intestinal muscles relax and the food passes through the intestine slowly. As the food remains in the colon for long, more gas is developed. Gas and constipation can be prevented by consuming more water, exercising, and regular consumption of fibre-rich foods.

Women, who are at a greater risk for ectopic pregnancy, include those who have:

An ectopic pregnancy requires immediate medical treatment and cannot be allowed to continue for the full term. Your gynaecologist or doctor can easily confirm if the egg is implanted within the uterus by performing an ultrasound test. Sometimes, experiencing abdominal pain in the first trimester of pregnancy could be a sign of an impending miscarriage. A miscarriage usually occurs in the first 13 weeks of the pregnancy term and impacts around 15-20% of all pregnancies.

Major symptoms of a possible miscarriage include:

If a pregnant woman experiences contractions regularly before the completion of 37 weeks of her pregnancy along with persistent backache, is more likely to have preterm labour. Preterm labour can occur anytime between the 20th and 37th week of pregnancy. During these weeks, one may feel pain in the pelvic area or lower tummy, caused by the contractions. The contractions are also followed by vaginal bleeding. The woman should consult her doctor immediately if she experiences abdominal pain during this time.

When the placenta detaches from the uterus before the completion of pregnancy, it is known as placental abruption. This can be life-threatening for a baby, as the placenta is the only source of oxygen and nutrition to the baby. Placental abruption occurs once in every 200 births and usually occurs during the third trimester. Pregnant women, who have had a history of placental abruption in previous pregnancies, are at high risk of this complication, along with those with other medical complications such as high blood pressure, preeclampsia, and abdominal trauma.

Major symptoms of placental abruption include:

Most women go into immediate labour when the placenta detaches and deliver their babies by undergoing an emergency caesarean operation. In the case of mild abruption, doctors may either allow the pregnancy to continue or perform induced labour or vaginal delivery.

After 20 weeks of pregnancy, most doctors and gynaecologists regularly check the blood pressure of pregnant women, in order to detect any abnormality.

Around 10% of pregnant women get a urinary tract infection (UTI) at some point during their pregnancy term. While early detection of a UTI can be treated through antibiotics, ignoring this problem can lead to serious infections in the women’s kidney that increases the chances of preterm labour.

Common symptoms associated with a UTI include:

Most doctors and gynaecologists conduct regular urine tests to check the presence of bacteria that can lead to a UTI. When detected early, a UTI can be easily treated using antibiotics.

Common symptoms of appendicitis in pregnant women include: Gallstones are the presence of stones in the gallbladder of a pregnant woman. Gallstones are focused in the upper right part of the abdomen. In some instances, the pain may be felt around the back and below the right shoulder.

Gallstones are common in pregnant women, who:

Some Other Causes of Abdominal Pain in Pregnancy

In addition to the above conditions, there are a host of other reasons that could lead to abdominal pain during pregnancy:

In case you experience stomach cramps in the early stages of your pregnancy, you are advised to report this to your gynaecologist or midwife.

Remedies for Stomach Pain During Pregnancy

If you are experiencing any symptoms that indicate a serious complication, it is best to consult your doctor or gynaecologist immediately. However, pregnant women feeling mild pain in the abdomen can try out any of the following remedial treatments at home:

Additionally, you can try out the following remedies too to get rid of abdominal pain:

Stomach pain is not necessarily a sign of a miscarriage. However, if you experience a sharp and intense jab-like pain, it’s best to visit your doctor to rule out any issues.

If you are experiencing any of the symptoms mentioned below during any stage of your pregnancy, or even stomach pain in early pregnancy, it could be indicative of a more serious complication. In this case, you must consult your doctor:

In some instances, these symptoms may not be related to your pregnancy and may be caused due to some other medical condition such as an ovarian cyst, kidney abnormalities, urinary tract infections, or gallbladder problems. While stomach cramps are not a serious cause of worry, it is advisable to see a doctor if they are very severe and unbearable for you.

Hip Pain during Pregnancy
Pregnancy Complications To Watch Out For