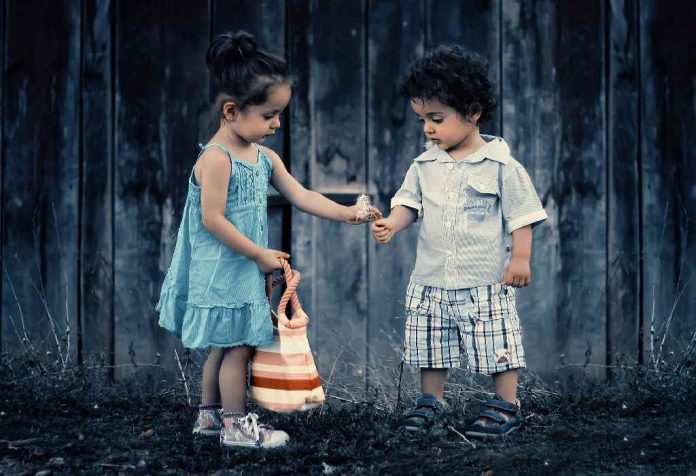 In this age, where we hear horror stories about abuse every day, any parent will be alarmed by the sight of his child playing with his own or another child’s genitals. But this is actually a normal part of growing up and needs to be dealt with that way. Here’s how to identify what’s okay and what needs attention in preschoolers’ sex play.=

As parents, we consider our young ones as little angels, brimming with innocence and love. With this image in mind, it might be a little shocking to learn that even our innocent preschoolers have a sexuality of their own. While child sexuality is different from that of adults, it does exist and usually presents itself in the form of playing ‘doctor’.

What Is Sex Play In Children?

Sex play in children usually refers to taking off their own or another child’s clothes and playing with one’s genitals. The trigger behind these actions is not arousal as it is in adults, it is plain curiosity. Your child is just exploring a part of his body that is usually kept covered. We often play with babies, pointing out their noses or hands, but we don’t do that with their privates, which makes it a less familiar body part.
Another fact is that if preschoolers realize the difference between the sexes, they can usually identify a man or a woman based on external appearance. But while playing doctor with a friend of the opposite gender, they realize more differences in their body parts – one has a penis, the other doesn’t. This leads to more curiosity which in turn results in further exploration.

Is Sex Play In Preschoolers Harmful?

Not at all; sex play is a normal and healthy part of growing up. It is your child’s first realisation about how different men’s bodies and women’s bodies are. Children might engage in sex play with other children of the same gender or the opposite one. This is absolutely no indication of their future sexual orientation or of promiscuous behaviour.
Touching their genitals might give kids a mild feeling of pleasure, which might make them want to do it again. This is normal too, although you can explain about appropriate behavior using the tips mentioned below.

How Can One Deal With A Child Engaging In Sex Play?

The first thing that one must not do is shaming the child. It might be a little unsettling to catch your child in the act, but remember that humiliating him might scar him for life. Instead, try out these tips: What Is Not Normal In Preschoolers’ Sex Play?

Usually, normal sex play happens between the children of more or less the same age, and is usually a light-hearted act, accompanied by laughs. The children are usually not scared or guilty when caught. They generally stop once their parents explain about appropriate behavior.

If you notice any of these, it can be abuse or some kind of illness, ranging from physical to emotional. In any case, be sure to talk to your doctor who’ll refer you to the right specialist.
The most important thing to remember is to stay calm in every situation and keep your child’s well-being in focus. Never use force or harsh words; most kids are satisfied with a short, gentle explanation. Keep communication channels open with your kid and your kid will reward you with complete honesty on his part.

My Story About Breastfeeding and the Challenges I Faced

Worried About Razor Bumps? Try These Tips to Get Rid of Them