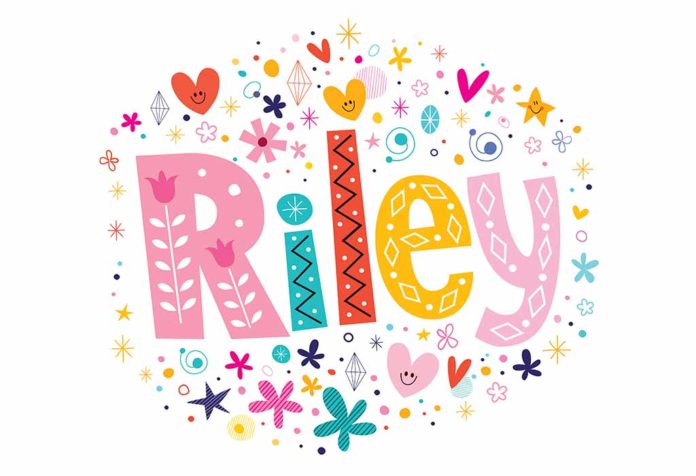 Derived from the Old Irish surname Ó Raghallaigh or O’Reilly, Riley is also derived from several English place names. Traditionally used as a male given name, Riley can be used for both genders. It first appeared as Raghallach, meaning ‘valiant,’ which was originated on a man who died in the Battle of Clontarf. However, the original name is more popular and well known as a surname. Riley is also thought to be related to the Irish name Reilly. Riley is mostly used for girls than boys in the US with spelling variations like Rylee, Ryleigh, and Rilee.

What Does Riley Mean?

Riley is primarily a given habitational name that comes from Ryley in Lancashire. It comes from Old English ryge ‘rye’ Leah meaning ‘wood clearing.’ The meaning of Riley is also associated as hardworking, stubborn, rich, and humble. Its feminine form, spelt as Rileigh, bears the same meaning. The meaning of Riley is also “valiant,” which was its first given meaning when it first appeared as Raghallach.

Derived from British place names from the Old English words for “rye clearing,” Irish Riley is a variation of Reilly, a surname taken from the upbeat and friendly given name Raghailleach. Ryleigh and other variations are also quite popular, along with the traditional Reilly. Riley is one of the most popular contemporary unisex baby names starting with R.

How Popular Is the Name Riley?

According to Social Security Administration data, Riley as a girl’s name had steadily increased in popularity since 2000 when the Riley popularity index stood at 131. In 2006, Riley rose to position 22, when its popularity peaked on the charts. However, Riley has steadily declined in popularity as a boys’ name. After breaking the top 100 in 2002, Riley has quickly lost popularity, with the Riley baby name ranking fitting into the top 300. Notable namesakes include Actress Riley Keough and Elvis Presley’s granddaughter. Designer Stella McCartney Bachelor alums Jason, Molly Mesnick, Athletes Stephen Curry, Ryan Dempster, and Tiki Barber have chosen their daughter’s names as Riley.

Interest in Riley – the US

Popularity of the Name Riley

Interest in the name Riley has been highest in the United Kingdom in the past ten years. United States, Australia, Canada, and New Zealand have made it to the top five positions. Being an intensely Irish habitational name originating from Lancashire, Riley has found the highest appreciation among the parents of the United Kingdom.

Search Trends of Riley – the US

Among the sub-region of the US, Kansas records maximum searches for the name Riley over the last ten years. Indiana, Nebraska, Missouri, and Alabama are the top five cities where search trends for Riley have been recorded to be the highest.

Middle Names That Go With Riley

A good middle name may need a bit of a thought as it offers potential name combinations. Here is a compilation of the best double names with Riley that may be your answer to a perfect middle name.

Celebrity names permeate all aspects of everyday life through the media. Parents who attach extravagant importance to their star status might want their children to attain an equal amount of fame and wealth. Here’s a list of some of the popular personalities named Riley who might guide your child in the right way.:

Baby-names like Riley can come from the same heritage or have a similar style. Family names for Riley may be used to denote inheritance or as a way of identifying a certain aspect of that individual by trade, father’s name, location of birth, or physical features. Here is a list of some of the other names for Riley that may produce the same effect as the original name.

Names that rhyme with Riley refers to phonetic similarities of the name. Here are some names that sound like Riley that increases the probability of being chosen based on their accent and pronunciation.

Sibling names can be considered as per their origin, the same letter, same meaning, or start with the same ending. So, if you are looking for sister names for your child or brother names for shortlisting, here are some of the best sibling names that go with Riley for strengthening the bond of love between them:

Nicknames can be creatively conceived by adding certain suffixes or words, dropping letters to the name itself, or shortening it to sound rather cute or funny. Here are some of the nicknames for the name Riley that may be used without sounding derogatory in any way.

Riley is undoubtedly modern even after being around for decades. Easy-going and approachable, Riley has the girl-next-door appeal that’s hard to find, but a treasure once found. Hence, this name stands apart from the vintage classics making a comeback on the popularity chart and catching the attention of new parents.

Treadmill Exercise During Pregnancy – Is It Safe?

M for Motherhood – for All the New Mommies Out There!

Celebrating Janmashtami With My Child