Nose Swelling during Pregnancy - Why It Happens

Nose Swelling during Pregnancy – Why It Happens

Nose Swelling during Pregnancy – Why It Happens 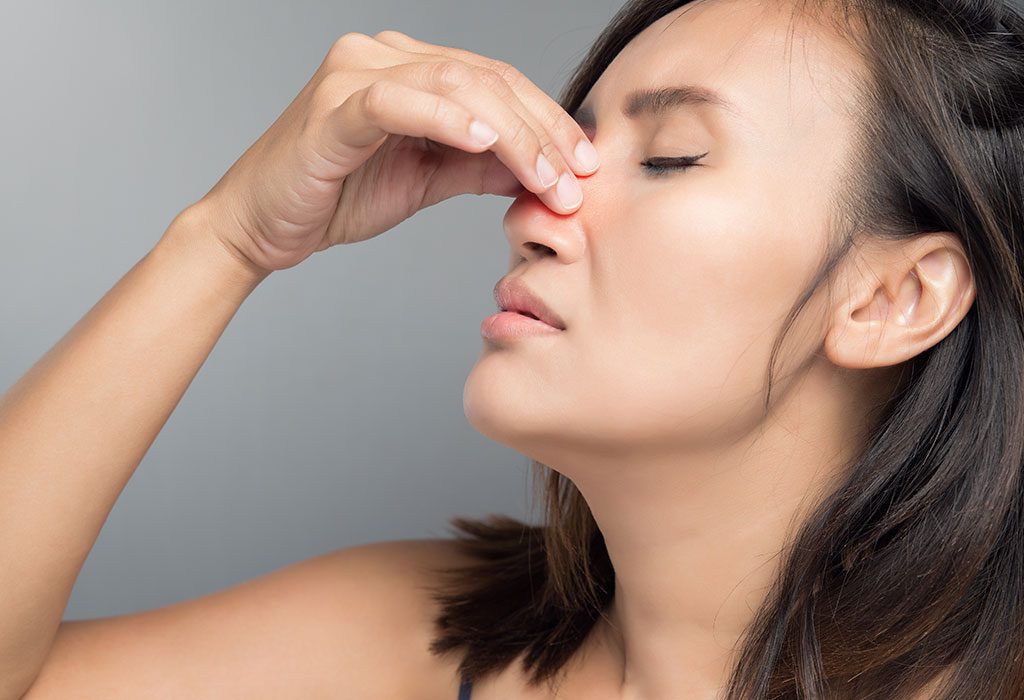 If you are pregnant, you are bound to experience certain changes in your body. Some of these changes such as tender breasts, pigmentation, swelling of ankles, and more are expected, but then there are certain changes like swelling in the nose is not expected at all. Yes, swelling in the nose is also a symptom of pregnancy. If you feel that your nose is getting bigger and wider, it could be due to hormonal changes. As the progesterone and oestrogen hormone levels are high during pregnancy, hence it may lead to swelling in your nose and other parts of the body too.

What Are Some Unusual Symptoms of Pregnancy?

Apart from swelling in the nose, there are a lot of other unusual symptoms of pregnancy. However, not all women will experience all of these uncommon symptoms during pregnancy. Some women may find a change in their hair colour due to pigmentation, some may notice hair growing on their belly, and there will be some who may notice their feet becoming longer or bigger. All these symptoms are due to hormonal changes in the body during pregnancy. But they should return to normal after delivery.

Why Does the Nose Swell During Pregnancy?

Swelling in the nose during pregnancy is not a normal symptom of pregnancy and obviously you will worry. But if you have a fair idea of why it happens, you might be able to take care of those problems.

How Does the Shape of the Nose Change During Pregnancy?

During pregnancy, a woman’s body parts expand to accommodate the growing baby. The same is with the case of the nose. The increase in levels oestrogen during pregnancy results in the blood flow to the mucous membrane. The muscles and membranes beneath the nose thus expand because more blood is pumped through the nose. The soft bones of the nose are influenced easily and hence take a different shape. And this is why some women may notice their nose getting wider and taking a different shape during pregnancy.

When Will the Nose Get Back to Its Normal Size and Shape?

Nose enlargement during pregnancy happens because of the hormonal changes in the body of a pregnant woman. However, these changes are temporary. After delivery, the hormonal makeup goes back to its normal level, and all these changes should get back to normal within a month to forty days.

How to Prevent Swelling in the Nose During Pregnancy

Although swelling in the nose is very normal during pregnancy, there are ways to manage and lessen the swelling. If you notice swelling in your nose, try and minimise your overall salt intake, it will lessen the level of water retention and manage the high blood pressure. You can also drink water as water intake helps reduce water retention which in turn reduces the swelling. Taking the right precautions as suggested by the healthcare provider is the best way to prevent nose swelling during pregnancy.

Usually, swelling in the nose is normal during pregnancy and you need not worry. However, if you notice swelling anywhere else in the body such as hands, face, or feet, you should check with a doctor. If you notice severe or sudden swelling, it can be because of high blood pressure. And preeclampsia (high blood pressure during pregnancy) coupled with water retention is not really favourable for pregnancy, so it is best that you consult a doctor without delay.

Pregnancy can bring about certain weird and unwanted changes, such as a swollen nose, but be assured that these changes will subside post delivery. Whatever changes happen in the body during pregnancy are because hormonal fluctuations and there is no need to concern yourself. Pregnancy is a wonderful time, so enjoy it. Eat healthy and you will have a safe and healthy pregnancy!