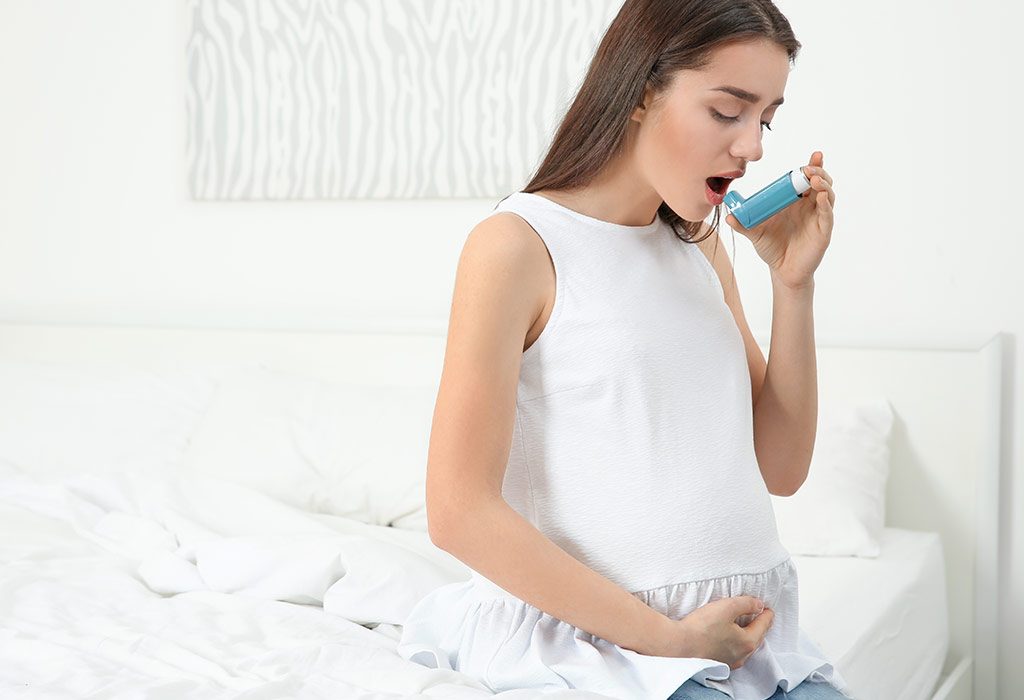 Asthma is a long-term inflammatory disease of the lung that constricts the airway due to swelling, and results in an attack in the form of chest tightness, shortness of breath, or coughing. It is variable and recurring in nature. Depending on the nature of its trigger and lifestyle, these attacks vary in frequency. About 4% to 8% of pregnant women are affected by asthma in India. It is one of the most common complications which can be controlled and reduced effectively. If you were asthmatic initially, there is no saying as to how your pregnancy will influence it.

The disease could improve, stay the same, or deteriorate during the gestation period. But, three months after delivery, your condition will return to the condition it was before pregnancy. If the condition does deteriorate, it happens mostly in the third trimester which could result in premature delivery. Such adverse results can be avoided by controlling the disease under the guidance of your doctor.

There are chances of developing asthma due to hormonal changes. Pregnancy asthma symptoms include shortness of breath or wheezing. These are the same symptoms as any normal asthmatic person. If asthma is not controlled or neglected, studies have shown to induce risks of:

The symptoms of an attack differ from individual to individual. They appear as a result of exposure to various agents or could be more frequent during the night time. A few of the agents which trigger an attack are:

Sometimes attacks could be caused due to fluctuations in temperature or weather conditions, making you more susceptible during the night. This is due to sudden change in temperature or humidity of the air you breathe in. Attacks have also been found to occur when there is stress, anxiety or in the case of very sensitive individuals, a fit of laughter.

How Does Asthma Affect Your Pregnancy?

The effect of asthma depends on your exposure to a trigger, duration of your attack and quickness with which you respond to it. When an asthma attack hits, it constricts your bronchial route and decreases the airflow into your lungs substantially. In such cases, the oxygen level in the blood depletes and all the cells in the body become hypoxic (receiving less oxygen). This, in turn, reduces the amount of oxygen which reaches your growing baby. When under such stress, the quickness of your medical response determines how long your baby is exposed and the influence of stress on the baby. A few of the complications seen are:

Such risks and complications can be reduced drastically by controlling the disease and being vigilant when an attack hits. It has been observed that more women with the condition had preterm labour than those without the condition.

If you have had asthma before your pregnancy, it is considered to be safe to continue your medicines through the term. Doctors have established that more complications have occurred when women have discontinued their medications than when have continued with the treatment.

Consult your OB/GYN to discuss the medications and treatment you followed prior to when you conceived. All asthma medicines have been declared safe for ingestion during pregnancy and do not affect your baby in anyway whatsoever. If you are concerned about the baby inheriting asthma, it can be closely regulated and checked for symptoms via an ultrasound. A routine you could closely follow might be:

There is an increase in the chances of your baby having asthma due to your genes, but these factors do not complicate the baby’s condition when it is inside your womb. Only after delivery and development into an individual do these signs express themselves. Thus by controlling your environmental conditions and lifestyle you can reduce the symptoms which may induce complications as your baby develops.

Asthma Treatment and Management During Pregnancy

According to the guidelines released by the Australian National Council in 2014, management of asthma for pregnant women has been regarded as the same for non-pregnant women with asthma. The main focus of asthma management in pregnancy would be – It is not sufficient to maintain your own health but constant checks on the growing baby are also required to make sure a healthy flow of oxygenated blood is maintained. It has been found that most drugs are safe for the growing baby, transmitting very little side effects. The following table gives a list of drugs which have been studied for their safety and complication-imparting consensus.

No medicine has been tested to be entirely safe during pregnancy, but it is highly recommended that you continue with your treatment so as to reduce the triggers and nullify any complications due to an attack.

It is hard to be on a constant vigil for such triggers and always being prepared is a key. Thus, maintain a healthy and calm environment. Practice yoga, eat healthy foods and be positive. In case there is an onset of an attack, keep your medications and your inhaler in an easily accessible area known to all your family members. This makes it easier for them to assist you in the attack. Sit (do not lie down), keep calm and concentrate on drawing in deep full breaths and do not get tensed. If the condition persists, consult your doctor immediately.

No. Based on human and animal model tests, most of the medication prescribed for non-pregnant women has been deemed safe for pregnant women as well. The treatment, though, would need to be checked and planned according to how pregnancy influences the disease condition.

Due to all the hormones released during gestation (progesterone in particular), the disease condition could change positively, negatively or remain constant. Thus, based on how progesterone is influencing your body, it is necessary to increase, decrease or even change your dosage. It is highly recommended that pregnant women continue with their medications because it minimises the onset the complications due to an attack rather than the medicinal side effects.

2. What Do I Do if My Asthma Gets Worse During Pregnancy?

If you are among the one-third whose asthma worsens during pregnancy, then consult your doctor. Explain your condition to them and plan out a routine for your treatment. As mentioned before, asthma can be controlled via medications which are considered pregnancy safe. Your doctor will draw out a treatment plan for asthma during your pregnancy by changing a few of your medications. It is essential that you follow this plan until you deliver.

3. How Does Asthma Affect Labour and Birth?

The occurrence of an asthma attack during labour is very rare because your body is already releasing adrenaline and cortisone during the birthing process. This negates the asthma attack to a large extent. However, if you’re not comfortable, consult your doctor and bring your inhaler along just in case.

4. What If I Get an Asthma Attack During Labour?

It is very rare that a woman gets an asthma attack during her labour. A study has found that most women are very unlikely to have an asthmatic attack during the last month of gestation. Even during this off chance, it is advised to carry your inhaler/medications with you when you are at the hospital. If your disease condition has been deteriorating as you go through your pregnancy, your doctor would have planned for a Caesarean form of delivery over the normal one. This is done to reduce the risks of high blood pressure, hypoxia or placental bleeding which could arise due to the stress of the disease on your body.

If you opt to go through a Caesarean, it is advised to use a spinal anaesthetic over a general anaesthetic because you are awake and any complications can be caught early and controlled effectively. It is also safe to use any pain relievers available for all asthmatic women.