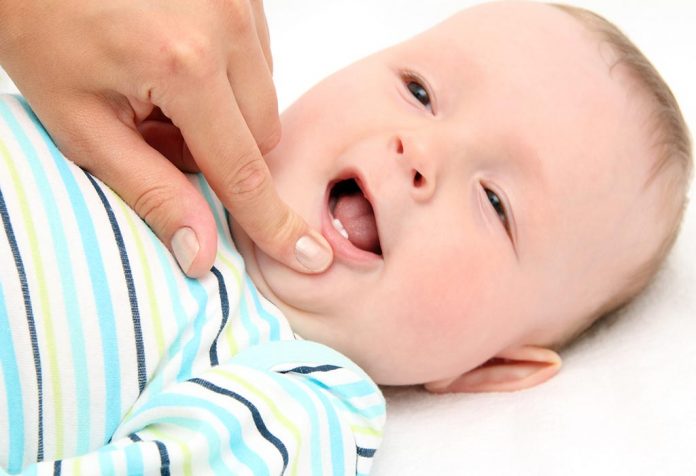 A baby’s first tooth usually appears when he is around six months old. But every baby is different, so some may begin teething quite late. However, if your child has reached fifteen months of age and shows no signs of teething, then it can be a cause for concern.

Video: Late Teething in Babies- Know the Causes and Complications

What Is Delayed Teething?

When the first few teeth, also known as baby teeth, milk teeth, or deciduous teeth, appear, your baby is said to be teething. This usually starts to take place when your baby is around six months old. It is not uncommon for a baby’s first tooth to appear only after his first birthday. But some children are late bloomers; such kids may have their first tooth erupt only after 15 months of age, which is known as delayed teething.

Reasons for Late Teething in Babies Some children are just late bloomers which is why teething can be delayed in their cases. Apart from that, here are a few other reasons for late teething in babies:

If delayed teething runs in the family, then it should come as no surprise that your child follows suit as well. Both your side of the family as well as your spouse’s can be responsible for a delay in the appearance of your child’s first tooth. Ask your parents or relatives if you or they faced the same issue, and if yes, then this could be one of the reasons why your child hasn’t begun to teethe yet.

Also Read: 7 Useful Tips on How to Get A Teething Baby to Sleep

If your baby is not getting enough breast milk, or if the formula he consumes is not nutritious enough to meet all his needs, then it will lead to delayed teething. Breast milk contains calcium, and your baby needs this for the growth and development of his teeth and bones. Baby formula usually contains nutrients like calcium, phosphorus, and Vitamins A, C, and D, that help with the growth and repair of bones and tissues, immunity, and overall development of your child. Calcium is especially important for strong and healthy teeth. But if the baby formula you use does not have all of these nutrients or if your baby is not consuming enough of it, then it could lead to delayed teeth eruption.

Hypothyroidism is a condition wherein the thyroid glands don’t produce adequate amounts of thyroid hormones for the body to function normally. Hypothyroidism usually affects heart rate, metabolism, and body temperature. If your baby has an underactive thyroid, then it is most likely that he will face a delay in hitting several milestones like walking, teething, and even talking.

Hypopituitarism refers to the decreased secretion of one or more of the eight hormones which are produced by the pituitary gland. It can also lead to several diseases and conditions associated with hormone deficiencies, such as obesity, high cholesterol and so on.

Delayed teething can also be a part of certain medical conditions or disorders, such as Down’s Syndrome. It can also be due to a physical obstruction in the gums or the jaw bone, which doesn’t allow the tooth to erupt.

Also Read: Is Vomiting Normal While Teething in Babies?

Firstly, check with your parents and relatives to make sure that delayed teething does not run in the family. If it doesn’t, and if your baby is more than 15 months old, then you should consult a doctor. Check for other signs like weight gain (when your baby isn’t eating), delayed overall development, abnormal metabolism, and lethargy. A lot of people consider late teething a sign of intelligence, but this doesn’t necessarily have to be the case. Sometimes, children with a high IQ are early bloomers, while at other times, they’re late bloomers.

Your baby’s teeth coming in late can cause you to worry. Observe your child, and look out for any abnormal signs like hoarse crying, constipation, or an abnormal heart rate. Go through your family history and keep a note of relatives who started teething late. If your response to all of this is in the affirmative, then your child is probably showing signs of delayed teething. Consult your doctor if this is the case.

Chances of Getting Pregnant on Birth Control

Getting Admitted With Fever When the Entire Nation Was Under Lockdown