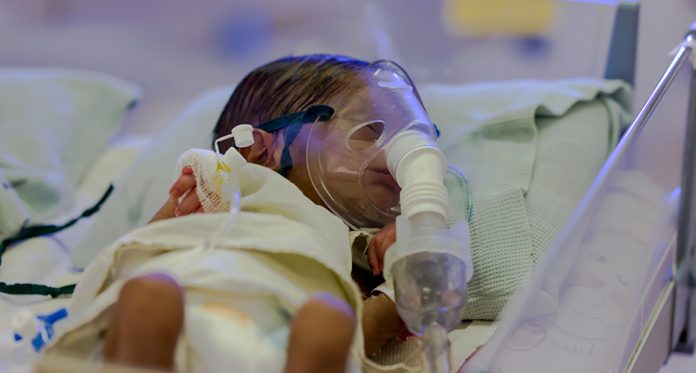 Every pregnant mom knows that the days leading up to her delivery are crucial and check-ups must be taken seriously. During one such check-up this Mumbai Mom discovered that her baby’s irregular breathing patterns were giving away news she was not ready to hear. Find out how this brave woman and her fighter baby battled the odds.

When you’re pregnant, you take utmost care to ensure that your baby is born healthy. As you near your delivery date, doctors recommend a ‘non-stress test’ to check on your baby’s health by monitoring his heart rate. During one such test, a mother – just three weeks away from delivery got the scariest news of her life! At 36 weeks of her pregnancy, her baby’s breathing patterns were abnormal and his life was in danger!

Dr Amit Jagtap, neonatologist, Hinduja Healthcare Surgical at Khar, stated that the test showed that “the baby was pale and severely anaemic.”
Both the mother and the baby’s blood was sent immediately for testing which revealed that the baby’s haemoglobin level was 4 gm/ dl, much lower than the normal range of 14 to 18.

The baby had only 20% blood left in his system!

They went on to deliver the baby through a C-section and found that the baby was completely white as he had lost a lot of his blood. He was in a dangerous position where he could have lost his life.

Thankfully, the baby survived the delivery and was given three rounds of blood transfusion and respiratory support in the neonatal intensive care unit that helped stabilize his condition.

The case was later identified as that of ‘feto-maternal hemorrhage!’

Dr Ravindra Chittal, consultant paediatrician at the hospital said, “The baby was in a shock. The first round of blood transfusion was performed hours after the delivery. We put him in the NICU for around five days and his condition gradually improved.”

The father of the baby also added said that baby was doing well. “It was disturbing when doctors told us about this. We have to take him for follow-ups,” he added.

What is Feto-maternal hemorrhage ?

Feto-maternal hemorrhage is a rare condition where the fetal blood enters into the maternal circulation before or during delivery. While it is normal for to lose 0.5 to 1% of the foetus blood to the mother through the umbilical cord, the amount of blood lost was nearly 80% in this little one’s case! Such large amounts of blood loss could be dangerous and result in the death of the baby in the womb! Such babies are often referred to as ‘ghost babies’, owing to their pale colour.

To identify if the baby is in danger of this condition, the Kleihauer–Betke test is administered. However, as the actual test is not available in the city, the doctors from the Hinduja Healthcare Surgical hospital opted for indirect methods and were able to identify the condition at the right time.

We’re glad that the mother and baby are doing well and hope that more doctors as those involved in this case go the extra mile to ensure the well -being of their patients – both born & unborn.

My Journey From Pregnancy to Parenting

Are You Prone to Anxiety Attacks? 7 Effective Techniques to Calm Yourself Immediately

You’ll Be Astounded With What Research Reveals About Your Baby’s Name!