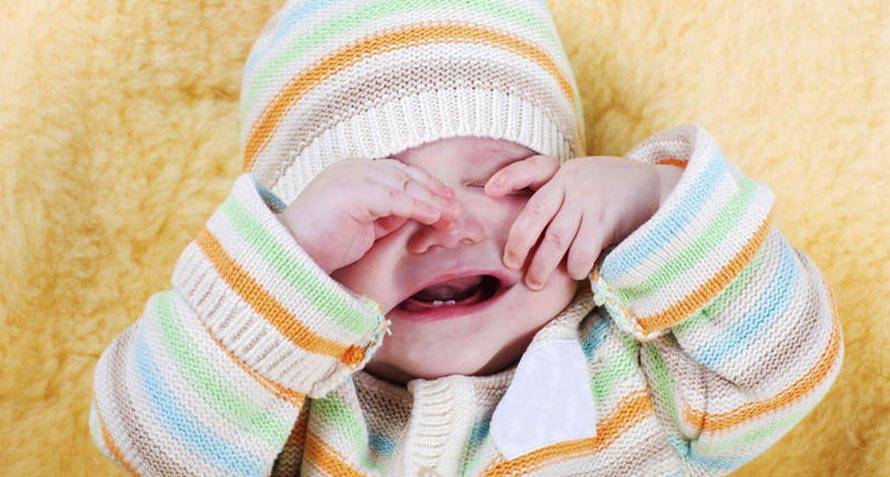 With weather changes, there’s a very good chance of your little one catching a common cold. While worrying, we know that common colds aren’t a serious concern. The common cold has similar symptoms in both adults and children including blocked noses, coughing and sneezing. But wait, what if the symptoms your child is showing just look like the common cold but are actually more serious?

It can be very easy to mis-diagnose a serious concern with common cold especially as the symptoms are often similar. In winters, when babies are prone to a number of infections, it is important for us to make a clear difference so that we can administer the right treatment.

So first, what are the symptoms of the common cold?

In most cases, the symptoms in your baby usually disappear without a doctor’s treatment over a period of two weeks though sometimes certain symptoms like cough last up to 3-4 weeks. Unfortunately, at times, the condition your baby is suffering from is not common cold but a more serious infection like the following:

A very common complication, this ear infection arises when the virus or bacteria enters the child’s ear canal. In addition to the cold symptoms, babies tend to try and tug or pull at their ear due to ear pain, and there could possibly be some discharge from the ear. It’s not a cause for serious concern in most cases but at times has lead to hearing loss. Consult your doctor to ensure your baby is safe if any of the above symptoms are visible in him.

If you thought wheezing was another symptom for a common cold with a blocked nose, think again! Wheezing (whistling heard with every exhale) causes trouble in breathing and can lead to further complications like Bronchiolitis. Immediately contact your paediatrician if your little baby is wheezing, lest the condition worsens!

A sinus infection, If undetected, can spread to your little one’s brain! A cold leading to a sinus infection generally lasts between 10 to 14 days and is often accompanied by vomiting and swelling around the eyes. This infection isn’t much of serious concern if proper treatment is received timely which will help your baby recover faster and completely.

A chest infection that results in difficulty in breathing or eating for the baby, its mostly seen in babies below 6 months of age If, in addition to the common cold symptoms, your baby’s heartbeat is faster and he refuses feeds. you need to consult a doctor immediately as he may have contracted this infection and needs to be treated in time to avoid further complications.

Croup is an infection where your child’s voice may sound different and his coughs are hoarse and distinctively sound like a barking seal. While considered serious earlier, today croup is of little concern as vaccinations against measles protect your baby from the worse forms of croup, but call your doctor right away if you suspect your child has croup, in order to ensure that it isn’t a serious case.

The common flu shows similar symptoms to the cold but there are a few marked differences. Your child will have chills and might have diarrhoea and vomiting in addition to the cold symptoms if he has the flu. It isn’t a cause for major concern, but since it’s about your little one, it’s best that you don’t take any chances. Speak to your child’s doctor and do as he says. A few home remedies like ibuprofen for fevers (for babies 6 months or older) or mist humidifiers and nasal sprays for a runny nose can also help ease your baby’s discomfort through the flu. However, these remedies should be tried only if approved by your child’s paediatrician.

Other symptoms in addition to those for common cold include diarrhoea and trouble breathing. Watch out for flaring nostrils or a sinking chest to recognise trouble in breathing. Pneumonia in babies is cause for some concern and you should contact the doctor as soon as possible. Doctors generally prescribe antibiotics and rest with lots of fluids to make up for the dehydration caused by pneumonia.

Strep throat symptoms for babies include the ones for the common cold and bloody nasal discharge as well. They may also develop scarlet fever rash. If your little one shows these symptoms after a cold, Contact your doctor immediately as, if allowed to linger, strep throat can cause further complications!

With a whooping cough, instead of the cold healing, the cough worsens – especially at night and your baby might find it difficult to breathe and will gasp through his cough bouts if he has whooping cough. Infants, on the other hand, don’t always have the classic whooping cough. Instead, they may have “apnea,” a pause in breathing. If you notice this in your baby, be sure to immediately contact a doctor and make sure your baby receives treatment to prevent worsening of the condition.

While these are infections made worse from a persisting common cold, certain conditions are unrelated to it but share symptoms and can be mistaken for the same. Keep a tab on the following conditions to ensure your child is safe with early diagnosis. After all, a stitch in time saves nine!

You may mistake Hay fever or seasonal allergies in your baby for common cold due to similar symptoms like, a constant runny nose and sneezing, and your baby rubbing his eyes because they’re itchy. But understand that if these symptoms mostly happen during certain times of the year and are aggravated outdoors, it isn’t the common cold Also, since its an allergy and not a respiratory infection, your child won’t have a running fever. However, don’t take Hay fever lightly and contact your doctor if you suspect your child has it! Don’t risk his health because, If untreated, Hay fever can lead to long term health problems.

RSV is a common and highly contagious virus infecting the respiratory tract that is often mistaken for the common cold due to similar symptoms like fever, stuffy nose, and some crankiness. But take notice that if your baby is wheezing and grunting with each breath, he might have contracted RSV. He is at high risk if he is a premature infant or a young infant and needs to be treated by a doctor in order to avoid secondary infections mentioned above like Bronchiolitis and Pneumonia. Asthma, the tests for which can be conducted only after the child is 5 has also been linked to RSV caused Bronchiolitis in babies. Thus, necessary treatments are imperative to avoid these infections.

Now that you know how serious a seemingly common cold can be, keep a closer eye on your baby and notice the details! He might be at a higher risk than perceived! Keep in mind that with certain symptoms like the following, you need to contact the doctor intermediately, even if they seem minor:

Your baby can’t express his pain properly yet and it’s in your hands to keep your precious child safe! Give him the healthy and happy life he deserves!