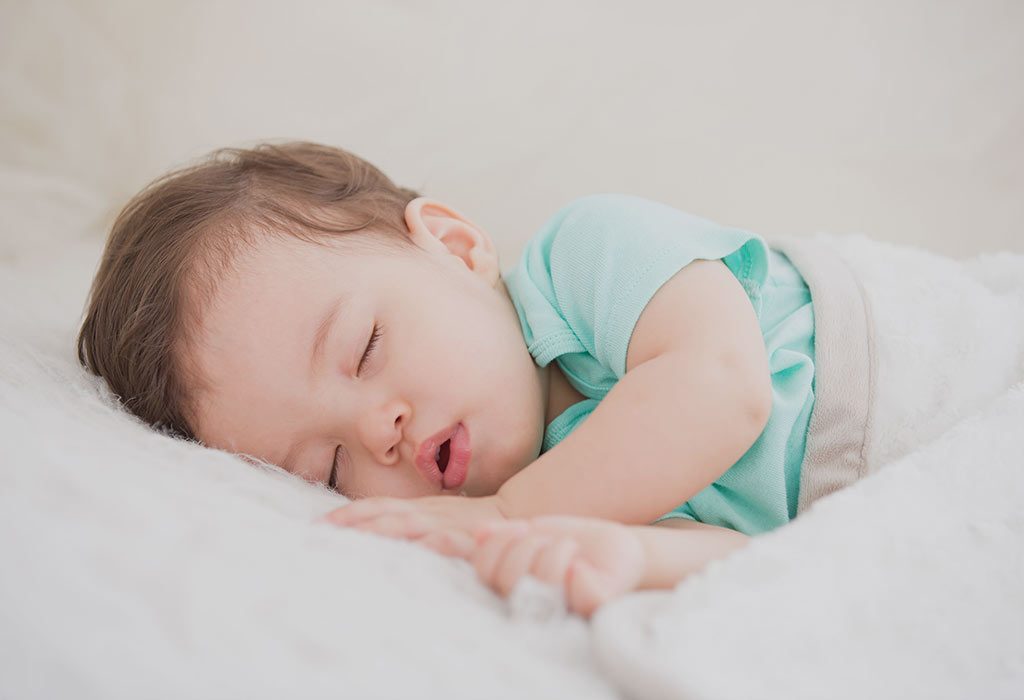 Sleep takes up almost one-third of our lives. It is believed that metabolic processes in the brain and the body are involved in regeneration during the phases of sleep. Babies, especially, are known to sleep a lot. This is because their bodies are still very young, and require considerable development. They generally sleep less as they grow older, but still take regular naps during the day until a point.

A baby, from his birth to three months, sleeps for almost sixteen to eighteen hours a day, with eight to nine hours of regular sleep and the remaining time in the form of five to six naps staggered throughout the day. From four to twelve months, his sleep amount drastically reduces to twelve to sixteen hours a day, of which nine to ten hours are reserved for regular sleep and the remaining time consists of two to three naps. A toddler between the ages of one and two sleeps for around eleven to fourteen hours a day, with eleven hours being at night and the rest in the form of two naps. Finally, a toddler between the ages of three and five years sleep for around ten to twelve hours, with almost all of that time being at night. However, it may be difficult to identify when your toddler is ready to skip the naps in favour of nighttime sleep. This article will help you identify when your child is ready to give up napping with a list of clear signs to look out for.

At What Age Do Toddlers Stop Napping?

Human biology dictates that your baby require the most sleep, that is approximately fifteen to sixteen hours a day. This is why he gets tired earlier during the day and naps constantly. However, in the first year, he may take naps five or six times a day or just twice a day. If you are wondering when he will stop napping, then the answer is between 3 and 4 years of age. Toddlers don’t need the extra sleep time by the age of three or four.

5 Signs Your Toddler is Ready to Stop Napping

There are various signs you can look out for to figure out if your little one is ready to stop napping. Five of the most common ones are:

Your toddler will exhibit high mood levels and energy through the entire day even if he is not napping. That is to say, he can stay awake from morning till late evening without complaining, becoming cranky or behaving fussy in any way. However, since toddlers generally have pretty inconsistent moods, you should make a judgement based on what you feel is normal for your child.

2. Struggle to Fall Asleep During Naptime

Getting him to take naps is much harder because their night sleep leaves them well-rested. For instance, your toddler might simply lie in bed and stay awake during the day rather than nodding off to sleep peacefully like they used to do. What you can do as a transition, is by replacing naptime with a daily rest period where they can lie down or relax for a few hours a day, usually in the afternoons.

If your child is fighting or resisting you during naptime, he might not be that tired. Your child will make his feelings quite clear by either not staying in his bed or simply telling you that he wants to stay awake.

4. Find It Difficult to Sleep at Night After a Nap

Naps result in difficulty getting to sleep at night. This can be observed in many ways. For instance, your toddler might stay awake considerably longer every night, calling for you multiple times, which can affect your sleep as well. He might also wake up a lot earlier than usual as he has gotten enough sleep during the day. Also, he may not show any signs of bedtime sleepiness and might still be energetic and active. Finally, your child might be cranky or fussy if woken up during his regular morning time, indicating a lack of sufficient nighttime sleep.

5. Sleeps Well at Night Even Without Napping

If your toddler has a restful sleep during the night without needing naps, he might have outgrown daytime sleeping. Toddlers need around twelve hours a night, so if you see that he is getting his full amount, naptime might become a thing of the past.

How to Handle the Transition from One Nap to None?

It is not recommended to make your toddler stop napping at once. Experts suggest that you slowly help him transition from napping once or twice a day to none. Below are some tips that will show you how you can wean him from naptime:

Sleep is a personal thing. Just like adults need different amounts of sleep per day, usually ranging from six to ten hours, the amount of sleep required by your child simply depends on the child. However, research has shown that three-year-old toddlers require eleven hours to fifteen hours of sleep in a twenty-four-hour cycle, with the average amount of time being twelve hours. Pay attention to your child’s emotional behaviour and mood levels before you decide how to help him give up napping for good.

Previous article « One Breast Producing More Milk – Is It Normal?
Next article Eating Chikoo (Sapota) Fruit During Pregnancy – Is it Harmful? »