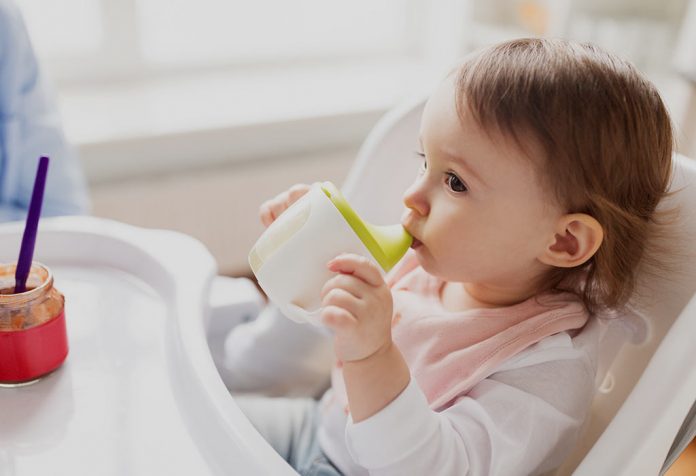 One of the key problems that hinder a baby’s transition from breastfeeding to bottle feeding is the fact that the mechanism powering them both is rather different. Breastfeeding involves creating a grip around the areola to press the nipple, which allows the milk to flow in smoothly and the baby swallows it up. Bottle feeding ends up with the baby taking more effort in suckling as he needs to reduce the milk flow to suit his own pace. Therefore, introducing the bottle needs to be a tricky endeavour.

How to Introduce Bottle Feeding to Your Breastfed Baby

To figure out how to bottle feed a breastfeeding baby here are certain steps and procedures you can adhere to: It is quite natural for a baby to be sceptical about a new entity being thrust into his mouth, especially when it feels nowhere close to the real breast. If your baby tends to refuse the bottle, here are a few ways you can make it easier for him.

What If Your Baby First Takes The Bottle and Now only Wants to Breastfeed?

Babies change their minds on the fly, which makes transitioning from breast to bottle more than a one-time thing. While you are rejoicing at the fact that your baby accepted the bottle right away, he might push it away after a few days and then choose only to breastfeed. The reason behind this could be a sudden realization that bottle feeding is absent from their mother’s breast and the touch of her skin and the body warmth. If this is the scenario for your child, try to sit with him for a few more days and using the bottle while he is next to you. At times, other situations such as an illness or other problems could cause him to reject the bottle. This would require a doctor to check him up and figure out the reason.

How to Teach Your Baby to Drink from A Cup?

Few families choose not to introduce the bottle at all. They rather prefer breastfeeding their child for a longer duration and then transitioning him directly to a cup. This has its advantages for sure. The chances of the baby getting confused with nipples are highly reduced. While most families continue to bottle feed their babies while they are lying down, opting for a cup can reduce chances of dental problems emerging early in life. Weaning the baby also gets a tad easier.

The transition to a cup requires more time than the bottle. Starting off with a sipper cup can be a stepping stone, allowing your baby to start sucking differently. Once that happens, you can make sure that at least one feed of the day is being rendered via a cup. As your little one grows up, he will get used to drinking from the cup right away. What If Your Baby Completely Refuses to Take Bottle?

Some parents do complain about their baby not taking bottle feed at all. While they might blame time or habit for it, some babies would simply refuse to accept a bottle at all. Keeping him hungry for long durations is also not a good way to make him take the bottle. Such babies are well-used to the sensation of a nipple and might be more accepting of a sippy cup instead.

What If You Decide to Wean Your Infant from The Breast?

Whether you are deciding to wean your baby early just by habit, or to make it easier for you to return to work, it is necessary to continue giving him breastmilk in other ways. Make sure you get your baby adapted to a bottle or a cup early on, to make the transition easier for you as well as for him.

Moving from breastfeeding to bottle feeding can make mothers feel like they are breaking the bond with their child. However, the bond is made by the mother’s love and her presence, which can continue in various ways that go beyond the act of breastfeeding.

Also Read: Signs That Baby is Getting Enough Breast Milk

Lump in Breast during Breastfeeding