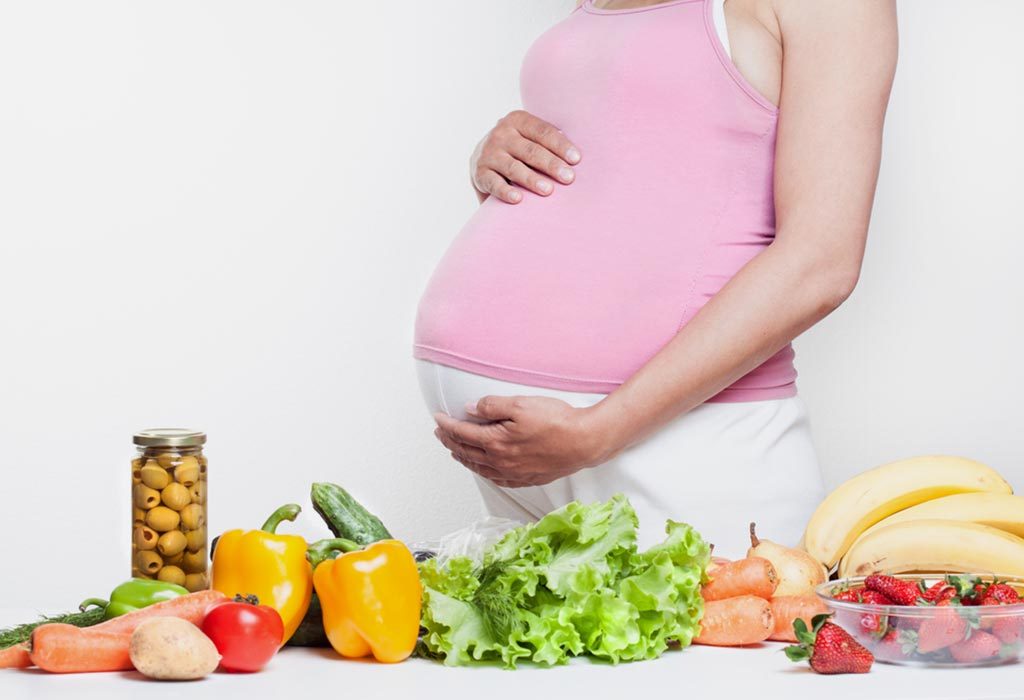 An important aspect to care for during pregnancy is your diet, as it can affect the health of the baby, as well as your mental and physical well-being in a number of ways. Your pregnancy diet should be created with the utmost care, keeping in mind the effects of the food items on the growing baby.

Let us look at some foods that should be avoided and some food items which can be had safely during the eighth month of pregnancy.

What to Expect During the Eighth Month of Pregnancy

The foetus gains weight quite quickly during the eighth month, which means so will the mother. If you haven’t noticed much weight gain in the previous months, this month more than makes up for the delay.

As the baby grows larger, there is increased pressure on the bladder, causing you to pee more frequently. This may make many women drink lesser water, as constantly wanting to pee can cause discomfort. However, it is vital to stay hydrated during pregnancy, so be smart about your intake of fluids by eating fruits with high water content, drinking lesser water at night, etc.

The mother’s enlarged uterus pushes against the diaphragm, a muscle involved in breathing, causing shortness of breath. It is advised to wear loose clothing to feel more comfortable

As the uterus grows quite a bit during the third trimester, it puts pressure on the stomach and intestines, increasing the risk of acidity. Eating non-spicy, easier to digest foods relives this issue. Food to Eat During the Eighth Below are some foods that can be eaten during the eighth month of pregnancy:

Fish contains a large amount of iron, which is important during pregnancy. Iron deficiency results in anaemia, which can cause a feeling of general fatigue in the mother. Fish also has other important nutrients like protein, which makes it a great addition to the 8th-month pregnancy diet chart.

Red meat is another great addition to the diet of an expecting mother, as it is also a rich source of iron and protein. Both of these are essential minerals to the mother, as they help accelerate the growth of the baby. Red meat can improve the general health of the mother, too, as it contains minerals that keep you from being tired or sick during pregnancy.

One of the most underrated fruits, bananas have been a great source of essential vitamins and minerals since ancient times. Bananas are rich in potassium, calcium, and iron, making it a must-have in any woman’s diet. On top of that, they also promote digestion and relieve constipation, increasing the comfort of the expectant mother in great ways, as they are a rich source of soluble fibre.

There is a reason why dairy products are so heavily promoted among children during their formative years. Dairy products, including milk, are a non-exhaustive source of vitamins and minerals, including calcium, potassium, proteins, and the likes. Consuming dairy products during the last month of pregnancy can have a telling effect on the growth of the baby.

Fibre-enriched foods are important during pregnancy, as they help prevent the feeling of constipation that occurs due to excess weight and excess hormone secretion during the third trimester. Leafy vegetables contain more than enough fibre, along with other minerals like iron, potassium, and calcium. They are a great addition to the 8th-month pregnancy Indian diet of an expecting mother.

Fat is a necessity for the body during the final trimester, though many people seem to assume otherwise. While foods high in fats are strictly off-limits, vital fatty acids still remain an important part of the diet of a pregnant woman. Omega-3 is an example of a vital fatty acid that contributes greatly to the development of the brain of the foetus. Other sources of good fats like peanut butter are eggs and fish.

Apart from having large amounts of fibre, orange also contains a large amount of Vitamin C, which is an essential nutrient for the body. Vitamin C is important, as helps in absorption of iron. Other sources of Vitamin C include tomatoes, lemons, and cabbages.

Foods Not to Include in the Eighth Month of Pregnancy Diet

Here are some foods that can cause harm to either you or the foetus:

In many Indian households, drinking unpasteurised milk is the norm. This has to be strictly avoided during the third trimester of pregnancy, as the milk is not processed enough to be deemed safe for consumption. Goat milk should be avoided, anyway, as if consumed unpasteurised, it may cause a fatal condition called toxoplasmosis.

Caffeinated items are a strict no-no in the last stages of pregnancy, as they can cause constipation and gastric problems. You can, instead, opt to consume large amounts of water, which is a necessity, even during normal times. Coffee is one of the third-trimester foods to avoid for any expectant mother.

This goes without saying, but alcohol and tobacco must be avoided at any stage of the pregnancy, especially in the third trimester. They can cause complications at the time of delivery and also have an impeding effect on the development of the fetus.

Fried food items should be avoided during your third trimester of pregnancy, as they add little to your diet in terms of nutritional value. Fried foods can also cause gastrointestinal problems, including improper digestion and heartburn, which can be extremely uncomfortable when you are carrying a child.

These type of fish items must be avoided during pregnancy, as they have high levels of a detrimental substance called methylmercury. Methylmercury can cause complications in the development of the nervous system of the fetus, so choose fish that have the required nutritional value and are not too fatty for consumption.

Liver and other cured meats must be avoided in the entirety of the pregnancy, not just in the third trimester. Cured meats like salami and ham increase the risk of toxoplasmosis and listeriosis in the unborn child, making it strictly off-limits for any expectant mother during the time of pregnancy.

Cheese that has been ripened using a mould, like brie, has to be avoided during the time of pregnancy. Also, cheeses that have blue veins often contain listeria, so they are harmful to the health of the child during pregnancy. If you have a craving for cheese during the third trimester, opt for hard cheese like cheddar and the likes.

A pregnancy diet plays an important part in the well-being of the mother and also the growth of the child. Consumption of necessary food items in ample quantities is a must and staying away from harmful substances like alcohol, tobacco and drugs is important for the health of the foetus.