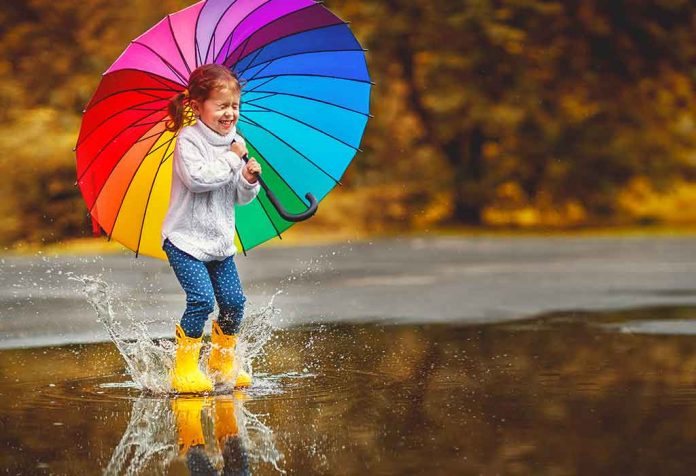 Iniya and Fluffy were all set for their trekking camp. Mummy told them to be watchful, as it was the green season, and it rained often. They were going to the top of the cloud hill, and play with the rainbow.

Fluffy was her cute puppy that had never seen a rainbow before. They were both excited. On their way, Fluffy asked Iniya about the rainbow. She sang:

The seven colourful bands appear after the rain –
As red as an apple,
As orange as a pumpkin,
As yellow as a lemon,
As green as a pear,
As blue as a river,
As indigo as blueberries,
And as violet as an eggplant.

They reached the cloud hill. After climbing a few steps, they saw white clouds around them. They touched the soft, cottony clouds, and played among them. Fluffy was shocked to see them turning black. He asked Iniya, “are these clouds turning wicked?”

She laughed and hugged the trembling Fluffy, and told him, ”They are going to pour out rain; the fun time is to begin.”

They played with rain drops, and rolled over on the grass. They jumped on the clouds as if they were jumping on a trampoline.

Very soon, the clouds formed stairs to the top of the hill. They jumped over each cloud, and reached the top. Iniya and Fluffy were thrilled to see the big rainbow! Iniya made two swings with clouds, and hung them on two sides of the rainbow.

They swung to the sky with great laughter. Now, the rainbow turned upside down, the violet on top forming a U-shape. Surprisingly, they got a see-saw! They played and sang:

Iniya now heard Mummy’s voice, “Dear, wake up! It’s late already; your new puppy has arrived!” Now, Iniya woke up from her dream, but still felt the smell of rain. When she peeped out of the window, she saw it was raining, and her favourite queen of seasons had arrived.

She happily ran to Mummy, who was cuddling the puppy, and said “Mom! We can name him Fluffy. We both will have lot of adventures in this rainy season.”

5 Quick And Easy Recipes for Your Little Munchkins

I Exclusively Breastfed My Baby! Here’s How I Prepared for This Journey

Don’t Compare. Every Baby Is Different and so Is Every Mother.

Breastfeeding – The Most Difficult Task in My Life, But I Finally Achieved It!

The Pains and Gains During My Breastfeeding Journey

The ‘Entrance Exam’ of Motherhood – From Pregnancy to Delivery

Does Vitamin B12 Affect Fertility?