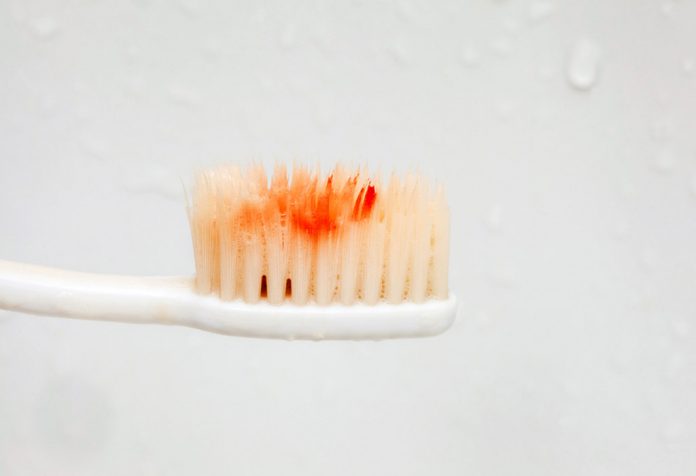 Weight gain, sudden cravings for food, and a constant need to visit the washroom are some of the symptoms of pregnancy that are often spoken about. However, certain other symptoms are not talked about much. Bleeding gums during pregnancy is one of those pregnancy symptoms. About half of the pregnant women have red swollen and tender gums that bleed, especially when brushed. Read on to understand the details of this sign of pregnancy.

Your body goes through significant changes such as raging hormones and a growing belly. Bleeding of the gums is also common in pregnant women. However, it is not something they need to worry about. Bleeding gums or gingivitis during pregnancy is a mild form of gum disease. Although it is not a significant issue to be concerned about, certain steps can be taken with the consent of the gynaecologist along with other measures to maintain good oral health.

Causes of Bleeding Gums During Pregnancy

Your pregnancy hormones affect almost every tissue in your body, including your gums. However, this isn’t the only reason for those swollen, red, painful gums. Below are some of the reasons why you could be suffering from this:

Signs and Symptoms of Gum Disease During Pregnancy

Not just bleeding, gum disease in pregnancy could be noted through the following symptoms: Complications of Gum Bleeding During Pregnancy

Though swollen, tender gums are common during pregnancy, gingivitis can become dangerous at times. Periodontitis, a severe condition of gingivitis with inflamed and bleeding gums needs utmost care and immediate attention. A canker sore or a recurrent aphthous ulcer can develop around gums. These are round red bumps that might become annoying because of the size. The lumps can grow big and cause infection when they rupture.

Can Gum Bleeding or Gum Disease in Pregnancy Cause Harm to Your Baby?

Bleeding gums are unlikely to harm the growing baby. Some studies suggest that severe gum disease can cause pre-term labour, low birth weight, and preeclampsia, but there is no proven relation between gum disease and its effects on birth or the health of the baby.

Treatment for Sore and Bleeding Gums in Pregnancy

Maintaining good oral health is the key to mitigating bleeding gums. The pregnancy gingivitis treatment is easy to be treated with good grooming habits and a regular visit to the dentist. Here are some of the treatment methods:

Apart from following a proper brushing routine, rinsing the mouth can also help in keeping the acid and bacteria away. Be sure to choose a mouth rinse that is alcohol-free as alcohol content usually leads to dry mouth. Mouthwash can be used easily throughout the day. Consult the dentist to find out the best-suited mouthwash. Normally, a dentist can prescribe antibiotics to treat bleeding gums, but pregnant women need to be careful as it could affect their pregnancy. Therefore, antibiotics are the last resort for pregnant women and should never be prescribed without written consent from the gynaecologist.

Antibiotics kill bacteria and reduce plaque in the mouth by checking the gum disease, thus allowing the gums to heal. Dentists prescribe antibiotics in the form of capsules or pills. They can also be directly applied as a gel on the gums or used as a mouthwash. Be sure to loop in your gynaecologist to ensure the dentist prescribes medicines that do not affect the pregnancy.

Surgery to treat bleeding gums is avoided during pregnancy unless there is an emergency, which is a rare occurrence. In case there is a pregnancy tumour, it is removed completely along with the complete elimination of the residual lesions and the plaque and calculus deposits, and also the factors that cause these accumulations.

Common Antibiotics Suggested By the Practitioner

Although any medication during pregnancy should be approved and prescribed by a dentist and your gynaecologist, these are some of the conventional antibiotics that dentists prescribe in case of gingivitis in pregnancy.

It is, however, best to consult your doctor before taking any of these.

How to Prevent Bleeding Gums While Pregnant

As they say, prevention is always better than cure. Therefore, practising good oral hygiene is the key to avoid pregnancy gingivitis and related oral issues. Below are some steps you must take and integrate it into your daily routine:

Home Remedies for Swollen and Bleeding Gums During Pregnancy

Nature has the entire cure that we need. Here are some home remedies to treat the bleeding gums at home:

Drinking green tea helps in reducing swollen gums and prevents the building of plaque and bacteria.

Mixing olive oil in salads will strengthen the teeth and limit plaque formation. It has anti-bacterial properties.

Even though honey is sweet, it has natural anti-bacterial qualities. It also has the necessary minerals to strengthen the gums. Clove oil is known to keep the gums and teeth healthy. It is also an antiseptic. You can rub clove oil on the gums or chew on a clove.

It has soothing qualities and can ease the pain or decrease the inflammation.  It can be availed in various forms such as toothpaste, mouthwash, or gel.

It helps to neutralise the acids in the mouth that can eventually lead to cavities. It can be directly sprinkled on the toothbrush or mixed with toothpaste.

Like green tea, this too has antimicrobial and antibacterial properties. Boil the leaves for 2-3 minutes and then strain the water. Use the water to rinse the mouth.

Rinsing the mouth with a mixture of tea tree oil and water can kill harmful microorganisms and provide instant relief to inflamed gums.

What Dental Treatment Should You Avoid?

You must make sure that your dentist has your necessary pregnancy details as medications and dental x-rays can cause issues for the fetus. The Department of Health advises that amalgam fillings shouldn’t be removed during pregnancy.

When Should You Call the Dentist for Gum Bleeding During Pregnancy?

In addition to keeping the dentist informed of your dental conditions, call the dentist immediately if you have a severe toothache, painful bleeding gums, persistent bad breath, loose teeth, growth in your mouth, or receding gums.

Bleeding gums during pregnancy is a common condition that can be kept in check. Oral healthcare is very important to maintain during pregnancy. Visit your dentist regularly and keep the dentist and the gynaecologist informed of any abnormalities that might be noted.

Why Home Activities Are Important: Making Super Active Kids Use Their Energy

Working From Home With Kids – Tips To Survive

Baby/Kids Modelling – How Can Your Child Be One?