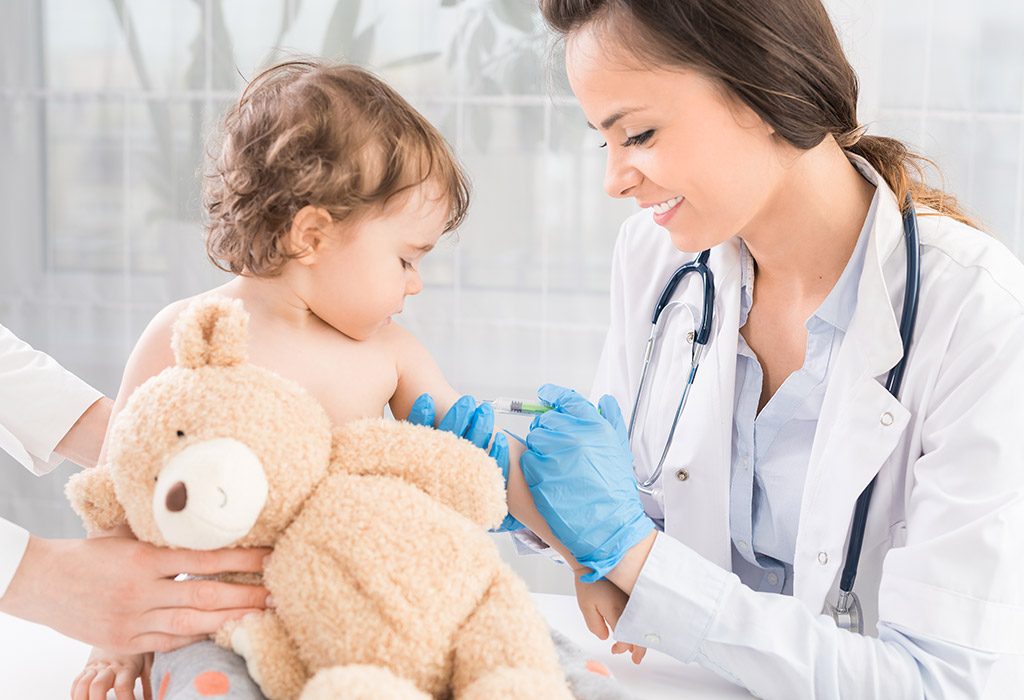 Immunization is an essential part of a child’s healthcare plan. It is important to know that vaccines play a crucial role in developing antibodies that help in strengthening your child’s immune system and protecting him from dangerous viruses. The DTaP vaccine is one of the most commonly found and important vaccines that your child requires. Continue reading to know why it is needed, and when you get your child immunized.

What Is DTaP Vaccine & Why Is It Recommended?

The DTaP vaccine for babies is an injectable vaccine shot used to treat three different infant illnesses – Diphtheria, Tetanus and Pertussis (whooping cough). While anyone of any age can catch any of these three illnesses, children are especially susceptible as their immune systems are not fully developed. Children are also vulnerable because diphtheria and pertussis are highly contagious diseases and can be caught from other infected kids very easily. Tetanus is contracted through open cuts, which commonly occur among active children.

What Are the Benefits of DTaP Vaccine?

As mentioned earlier, the DTaP vaccine is used to create antibodies that combat the three diseases – Diphtheria, Tetanus and Pertussis. These three diseases can be dangerous for young infants and adults alike.

Let’s take a detailed look at each disease.

Diphtheria is a contagious bacterial infection that can be extremely dangerous for children under the age of five and adults over the age of 40. It has a 20% fatality rate for those around this age group.

This disease causes heavy sore throat, swallowing difficulties, fever and extreme weakness. The condition manifests through a thick grey coat at the back of the throat, which can choke your baby and make it difficult for him to breathe. If the disease is not treated quickly, the bacteria caused by it can infect multiple organs and lead to multiple organ failure, heart failure and paralysis.

Tetanus is not a contagious disease and is caused by bacteria that live in the soil and dust. These bacteria enter through cuts and punctures on the skin. Tetanus is also known as lockjaw and causes severe muscle spasms, seizures, and even paralysis and death. Of all the conditions of tetanus reported, over 10% end up being fatal.

Pertussis or whooping cough is one of the most common vaccine-preventable diseases in children today. The bacterial disease is highly infectious and causes a cough so severe that even talking, eating and drinking becomes impossible. Pertussis can worsen and cause other complications like pneumonia, seizures, brain damage and even death.

Pertussis is especially dangerous for babies under the age of a year as their immune systems are more susceptible to the pathogen, as well as the complications that arise from the infection.

Doctors recommend that this shot be given to a child in five doses, which should be spread out over six years.

The recommended schedule for the shots is – three shots during the first year at the age of 1.5 months (6 weeks), 2.5 months (10 weeks), and 3.5 months (14 weeks). This is followed by the first booster dose at the age of 1.5 years (18 months) and the second booster between 4-5 years of age, along with a Tdap shot between the age of 9-14 years. After that, a booster of Td can be given every ten years.

If you fail to get the DTaP/DTwP vaccine for your child (<7 years), the doctor will prescribe TDwP/TDaP vaccine (3 dose series at 0, 1 and 6 months). Children aged 7 to 18 years who are not vaccinated, should receive one dose of Tdap vaccine followed by two doses of Td vaccine at 1 and 6 months. After that, a booster of Td vaccine should be given every ten years. Adults (older than 18 years) or pregnant women who were never vaccinated can be given one dose of Tdap followed by 2 doses of Td at 1 month and 6-12 months. Remember that a Td vaccine booster protects against tetanus and diphtheria but does not work against pertussis.

These are the guidelines by Indian association of paediatrics for vaccination of 0 to 18 year-olds. What Is the Difference Between DTaP and Tdap Vaccine?

While children under seven are administered the DTaP vaccine, the Tdap vaccine is intended for adolescents. Initially, only whole-cell components (TDwP) of the vaccine against all thee infections was available. Due to recurrent reactions and occasional seizure and brain infection, new types of vaccines were developed with lesser components for each infection, viz TDaP, TdaP, and Td. These are used as boosters for various age groups to protect from the three infections.

What is the Cost of DTaP Vaccine in India?

The DTaP vaccine price in india is approx ₹ 225.

Who Should Avoid DTaP Vaccination?

Doctors recommend that some children either wait or not get the vaccine due to medical complications like:

Risks and Side Effects of DTaP Vaccine

As with any vaccine, the DTaP vaccine has some side effects to watch out for, fever being the most common one. Here are some other side effects of a DTap vaccine: When giving your child the fourth and fifth shot of the DTaP vaccine, you might notice a general swelling of the area that can take up to a week to reduce entirely. This is a very common side effect, and there isn’t any reason to be alarmed.

There might be some moderate reactions to the vaccine which aren’t very common, but of which you should still be aware.

In case of any of these side effects, it is best to consult your child’s doctor immediately and ensure he receives the medical attention he requires.

Is There Any Serious Reaction?

Some of the more extreme and rare side effects include:

You must be especially wary of any increase in temperature. A high fever of 104 degrees F can prove to be fatal to your baby. Seek immediate medical help if the fever goes above 100 degrees. Medically trained professionals will be able to help reduce the fever and ensure that the health of your baby stays intact.

What Precautions Must One Take While Giving a DTaP Injection to a Child?

It is always more prudent to give your child the DTaP injection when he is relatively healthy. A sick child must not be given the vaccine as he will not be able to fight the side effects as a healthy child would.

Every parent struggles to do what is best for their child. Sometimes, this means taking preventive measures to ensure the long-term well-being of your child. Vaccines are the best way to ensure that your child does not suffer from ailments that can be easily avoided. Talk to your child’s healthcare provider to understand which vaccines your child should get and when.