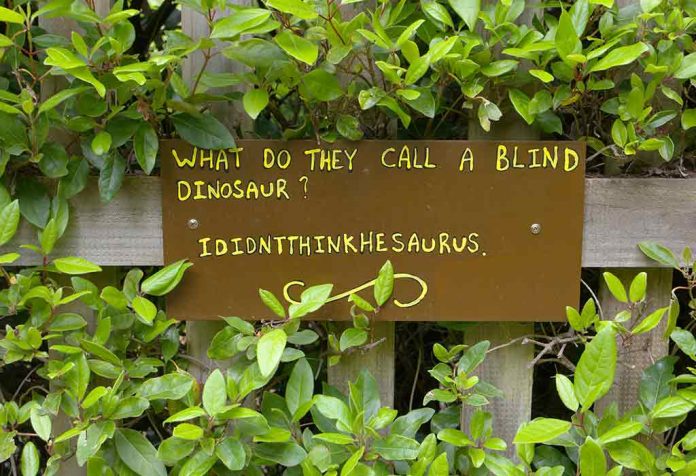 One of the best ways to keep kids engaged is to tell them jokes. There are plenty of themes around which jokes can be made and dinosaurs are definitely one of them. It’s a great way to also teach them about dinosaur names and improve their knowledge as well.

1. What do you call a blind dinosaur?

Ans: Do you think he saw us

2. What do you call any dinosaur that doesn’t take a bath?

3. Which brand of clothing do dinosaurs like wearing the most?

4. Which dinasour has 3 horns and is seen on 4 wheels?

Ans: A Triceratops on a skateboard.

5. What makes more noise than a dinosaur?

6. What sauce did the dinosaur put on her steak?

7. What do you call a sleeping dinosaur?

8. What to call a dinosaur that never stops talking?

9. This happened after the dinosaur took the school bus home.

Ans: He had to bring it back.

10. What would be the best way to talk to a dinosaur?

12. What did the dinosaur had to say after the car crash?

13. What was T Rex’s favorite number?

14. What happens to you when a dinosaur sneezes?

Ans: You get out of the way!

15. What dinosaur would Harry Potter be?

16. How would you know if there’s a dinosaur under your bed?

Ans: Your nose hits the ceiling!

17. Why don’t dinosaurs never ever forget anything?

Ans: Coz no one ever tells them anything!

18. Which type of dinosaur could jump higher than a house?

19. Why was the Stegosaurus such a good volleyball player?

Ans: Because he could really spike the ball!

20. What game does the brontosaurus like to play with humans?

These are some of the fun jokes you can tell your kids and keep them entertained for hours. Don’t forget to mix it up and also try coming up with your own set of jokes.

Hacks to Turn Your Old Clothes Into Brand New Ones

What Is Minimalism? Lifestyle, Advantages, and Challenges