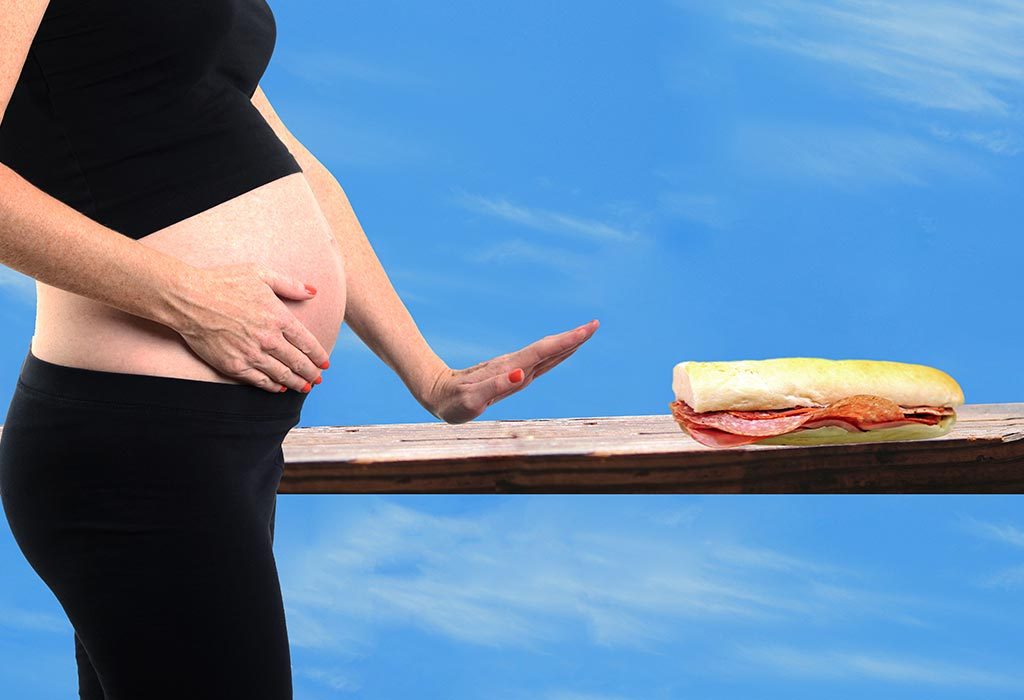 Pregnancy is a delicate time for women. Pregnant women are told to eat healthy foods and give up on junk food completely for the healthy growth of their babies. If you are pregnant, you must have been told the same and you must be wondering how you will ever give up those delicious foods that you absolutely love! It seems rather hard to suddenly quit coffee, pizza, pasta, doesn’t it? But you can do it, trust us! Most of the foods that are otherwise safe to consume may not be safe during pregnancy. Therefore, it is important that you learn about the foods that should be avoided during pregnancy.

Video: 10 Indian Foods You Must Avoid During Pregnancy

Indian Foods That Can Be Harmful During Pregnancy

Whatever you put into your mouth during pregnancy will be shared with your baby too. So it is important that you make healthy choices. What is good for you may not be exactly for that tiny one growing inside your womb. So make wise choices; avoid these foods during pregnancy and keep your baby safe. You already know that papaya should be avoided during pregnancy, but do you know why is that? Raw papaya or unripe papaya or semi-ripe papaya is not safe to consume during pregnancy. Green papaya contains latex in high concentration, which can be particularly harmful as it can lead to uterine contractions, which could even lead to a miscarriage. It also contains papain and pepsin, which impact the development of the foetus leading to many birth defects. Aloe vera is known for curing skin problems, but it might be harmful during pregnancy. Aloe vera not just affects the uterus and trigger contractions. It is not beneficial for the foetus as well. At the same time, aloe vera could also trigger reactions such as vomiting and diarrhoea, which can cause an imbalance in the electrolyte levels of the body. Fenugreek, known as methi dana in Hindi forms a core part of a woman’s diet once she delivers her baby as it stimulates the production of milk. Women are usually given methi laddoos after their delivery, but they should be avoided during pregnancy as they can have adverse effects on the health of the mother and the baby. Some women tend to have pineapple as their due date approaches, which is fine as long as they have consulted their doctor about the same. But eating pineapple in the first trimester of pregnancy is a strict ‘no’. Pineapple contains bromelain enzyme, which softens the cervix and helps induce labour. Thus it may lead to unwanted contractions and lead to a miscarriage. Eggs are a versatile food and without a doubt taste delicious. But can you enjoy them during pregnancy? Yes, you can but not in all forms! You can eat boiled eggs if you like, they are safe to include in your pregnancy diet. But you should never consume them raw. Raw eggs are used in various food preparations as well such as mousse, mayonnaise, various desserts, and sauces. Raw eggs have a high risk of containing the salmonella virus, which is well-known to cause multiple pregnancy complications. So, you should avoid eating them raw!

Salty and spicy foods taste yummy. You might crave for them during pregnancy and they may satiate your hunger and taste buds, but it is highly recommended to avoid foods that are high in salt. These include your favourites such as samosas and pakoras and even the usual potato wafers. High salt can leave you with high water retention and cause a host of issues. So avoid these too! Yes, we know it is a piece of sad news for you, but if you want to keep your baby happy and safe, avoid eating street food. For a while, forget about delicious chaat and Chinese food. Yes, you will crave for these foods, more so in pregnancy, because street vendors don’t usually adhere to the standard hygienic procedure while preparing food. Thus eating street food during pregnancy may put you and your baby at the risk of infections and diseases. You may have an upset stomach or indigestion, which can cause discomfort. Street food is also spicy which is why you should avoid it. Consuming spicy food can cause heartburn and a burning feeling in your stomach. So avoid eating it as much as possible. Sushi might be one of your favourite foods, but scratch that off your list of favourite foods while you are pregnant. Raw meat of any kind, especially fish, is extremely unhealthy as the raw meat may have parasites and other microbes in them. Eating cooked fish curry or fried fish should also be avoided. Yes, fish do have a number of important nutrients that a woman needs during pregnancy but stop yourself from eating it. The problem is not with the fish but with water. The water tends to have a large number of pollutants, including mercury, which is consumed by the fish. This inevitably can find a way into your body and can cause multiple problems. Certain varieties such as shrimp, salmon, and catfish, are generally considered safe for consumption by pregnant women but you should confirm with your doctor first before making them a part of your diet.

Fennel seeds are known to have traces of phytoestrogens in them which act like female oestrogen and are known to stimulate uterine contractions. Fennel seeds, just like fenugreek seeds, are given to women post-delivery as they stimulate the production of milk and cleanse the uterus. These seeds can be consumed in pregnancy in small amounts, after consulting with the doctor.

Not being able to eat what you crave for will obviously make you sad, but remember you are doing it for you and your baby. These are some Indian foods that should not be eaten during pregnancy, but there are lot of other food items that are recommended during pregnancy and are tasty too. So enjoy them!  Focus on staying healthy and keeping your baby safe and you will have a healthy baby!