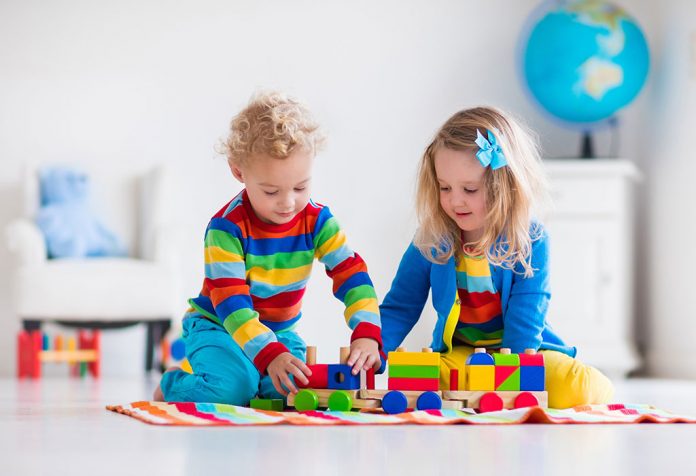 If you were a single child, you would probably remember playing with toys and games by yourself or with your parents, till you began playing with your friends. This transition from independence to social engagement is a necessary developmental milestone that a child needs to undergo. Parallel play in toddlers helps them engage socially with others from an early stage and interact properly, too.

Video: Parallel Play – How Does It Benefit Kids

What is Parallel Play?

Parallel play is the time when your kid emerges out of himself and begins to get ready to engage with other kids or people to play around with. Be with going from playing with toys all alone to sharing the toys with another and playing together, or simply choosing to go and play with a bunch of kids in the garden. In the initial years, a child engages in pretend play. As he grows parallel play takes an important place in his life. Parallel play marks an important developmental stage where a kid steps outside his comfort zone for the first time and makes an attempt to have another person in the vicinity of his playing environment and attempt to establish a relationship.

At What Age Should a Child Start Playing with Friends?

When it comes to parallel play, age is not a generalized factor since every kid approaches play and interacting with individuals in his own time, in his own fashion. When your baby is around a year and a half to two years old, he might observe other kids playing by themselves and react to it. Sometimes, he may occasionally pass a ball back to them as an attempt to engage. As he grows, around 3 to 4 years old, the engagement increases and the concept of playing with friends starts dawning on him. Some ways in which parallel play acts as a key aspect of development in kids include the following.

Not all growth and development has to happen actively. Some of it can take place in a passive manner, too. When at a park or watching a group, your child could learn a lot by seeing how children behave with each other, talk to each other, and perceive. If somebody shouts out for a ball, he will suddenly look towards them and try to look around for the ball, too. This is also how many children pick up words and styles of speaking a particular language.

When playing alone, a kid only focuses on the toys and everything is pretty much in a controlled environment. As parallel play enters the foray, your child will understand how another kid is going to react and will begin to play accordingly. While learning a new sport or a game, this learning act is at its peak and leads to developing new skills by observing others. If playing catch-catch with someone, your child will gauge the person he is playing with and will even try to pick up something new, too.

3. Development of the Freedom of Expression

Various parallel play activities end up in allowing all emotions, feelings, and desires to be expressed fully. Right from jumping with joy when something works out to handling an injury when your child falls down, to facing an argument if he does something wrong, everything from interpersonal behaviour to the surrounding conditions helps your child to explore and express the entire spectrum of emotion. This helps parents understand the natural demeanour of their kid, too.

4. Developing the Sense of Personal Boundaries

Your child will not interact with others the same way he interacts with you. Having entered an unknown zone, he will now begin to sense what he can do and cannot. While pulling your hair playfully might be fun for him, doing the same to someone on the ground is not. Handling someone who takes his ball forcibly to play with it and breaking into tantrums is all that helps your child understand what he ought to do and what he ought not.

5. Developing the Emotion of Camaraderie and Kindness

Most children grow up being highly possessive of what they have. It takes them some time to realize that things are not scarce, and sharing what they have with someone can bring both a lot of happiness. This is the time when you will notice if your child is generally an outgoing kid who makes friends easily, or is mostly aloof and takes his time gauging people and deciding whom to approach. Sharing his toys is the biggest sign that signifies it. How to Encourage Parallel Play among Kids?

To encourage parallel play in kids, try these following ways. But, don’t push a kid into something he is not ready for. Let him take his time to interact with others, he will do it eventually.

Engaging with other children is something kids start learning and doing gradually. For autistic kids or children with special needs, this could be an even greater challenge. Parental support and being a team member throughout the activity can help them explore new boundaries without worry since they know you would always have their back. Don’t force them to engage. Use various parallel play examples to ensure it becomes comfortable for both the kids and soon your child will his very first friend.

Popular and Trendy Braided Hairstyles for Women to Style Their Hair