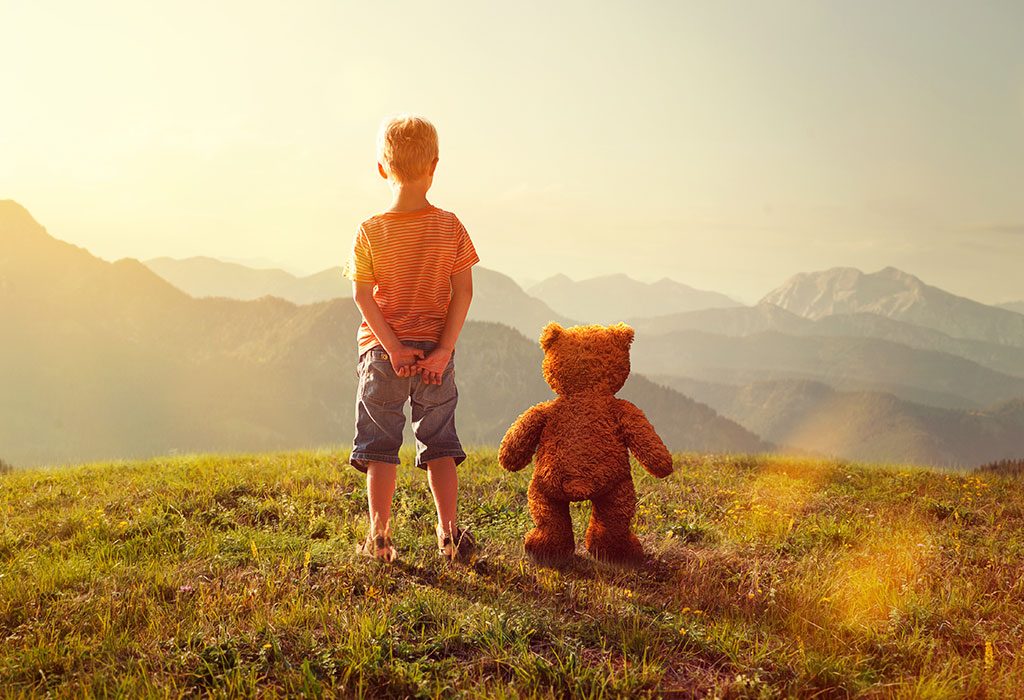 You may have seen your child play with their toys as though they were alive, often talking to them, naming them and giving them personalities. And if you are someone who has ever had your heart leap into your mouth because your child has squealed in dismay because you have trodden on or driven over their invisible companion, then your child has an imaginary friend.

Video : Why Do Children Have Imaginary Friends and How to Deal With It?

How Common are Invisible Friends in Children

Kids and imaginary friends are a common occurrence, and about one-third of all children create one. Not only is this considered perfectly normal, but it also very creative and helps in the development of your child.

Why Do Kids Invent or Make Imaginary Friends

1. To Satisfy Their Fantasies

Your child may be fond of Superman, Alice in Wonderland or some kind of other animation or story that involves creatures that do not exist in real life; by inventing an imaginary friend that resembles one of these characters, they are able to satisfy their desire for a friend like that.

2. To Quell Their Boredom

In the case of single children who do not have a playmate, imaginary friends are often invented to play with and disappear as the child joins a school.

3. A Way of Managing Their Shyness

Imaginary friends provide a way for children who are very shy to speak freely without fear of judgement.

4. To Use As Scapegoats

Some children do not like to take the blame or responsibility for some of the things that they do, and so they tend to put the blame on their imaginary friends. This should not be encouraged for too long as they will need to learn to take responsibility for their actions and face the consequences thereof.

5. For A Sense of Control

When kids are with their parents, they are often not the ones in control. Imaginary friends can be bossed about and give your child a sense of control.

Imaginary friends can be doting or loving or even just friends who do what your child wants without consequences of being scolded. This can help your child develop confidence.

Some children may be afraid to voice their opinions, and so they tend to use their imaginary friends as mediums for their unvoiced thoughts and feelings. For example, your child may say “Lulu (imaginary friend) doesn’t like going into the water.”

8. As A Coping Mechanism

Children who have lost someone close to them either because of death or a change of residence may create the person in their imagination as a way of coping with the loss. Does an Imaginary Friend Indicate Mental Disorder in a Child

Generally, imaginary friends are a healthy appearance of early socialization but can sometimes go beyond that of just a companion and sometimes even offer wisdom and strength in certain situations. In rare cases, imaginary friends can actually be a sign of mental illness, as in those suffering from schizophrenia, so if your child never seems to grow out of it, you may want to investigate.

By having an imaginary friend, children learn the art of role-playing and are able to practice holding both sides of a conversation which improves their verbal skills and their creative development.

At What Age Do Children Start Making Imaginary Friends

Children between the ages of two and a half to nine years of age tend to make imaginary friends. They can start off as one thing and change as your child grows older.

When Do Imaginary Friends Disappear

Imaginary friends usually disappear as a child grows up and has to deal with the real world more often. They often disappear when the child starts going to school; interaction begins to gradually fade until the friend quietly disappears.

Who Can Be Your Child’s Imaginary Friend

Children are very creative and imaginary friends will vary from child to child and can be pretty much anything from another person to a herd of cows. Imaginary friends present themselves differently in boys and girls. Boys tend to imagine friends who are more competent than themselves or at least their equals as they can relate to them better. In girls, they prefer to imagine friends who are less competent than they are so that they can somehow nurture their friends.

What do Pretend Kids do Do Kids Know it is an Imaginary Friendship

In all normal cases, no matter how small and no matter how much the interaction between your child and his or her imaginary friend is, your child will always know that the friend is not real and that its very existence depends on him or her.

Dealing with Invisible Friends in Children

Tips on dealing with your child’s imaginary friend include:

Here are some frequently asked questions:

1. Can I encourage my child to make an invisible friend?

It is always best that you do not try to encourage it, rather let it be if it happens on its own. You can provide some downtime for your child without any distractions, but other than this there is no point. If your child still does not invent a friend, it just means that he or she would rather play with blocks or do something else.

2. What if my child’s imaginary friend is scared?

Children sometimes use their imaginary friends as a way of projecting their own fears onto someone else. If your child’s imaginary friend is scared, it is most likely that your child is actually the one who is frightened so the best thing to do would be to help your child through the fear.

3. What to do if your child’s imaginary friend is behaving badly?

Just remind your child that rules are rules and that they need to be followed even by his new friend. If the imaginary friend was behaving badly, then you need to explain to your child that they will still need to share in the consequences of the action.

Some children will not be able to remember the existence of their imaginary friends as they appear suddenly to fulfil a need that your child has, and they disappear as the need goes away. It is all a healthy part of child development.

Also Read: How to Teach Kids to Make Friends