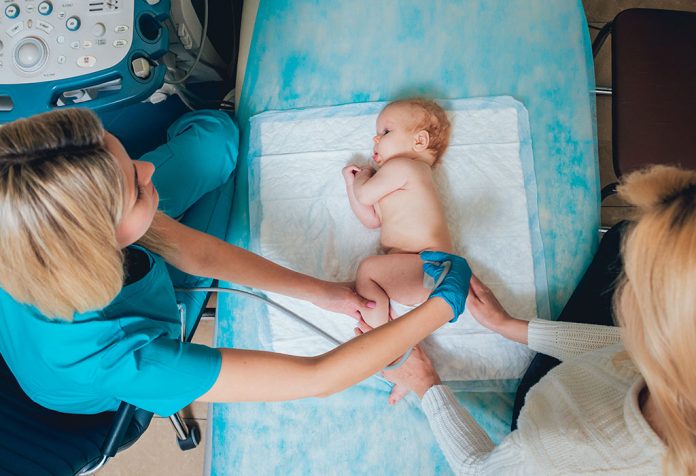 As a baby starts growing up, there are a lot of development milestones he will begin to hit at various stages of his life. One of the primary ones on these lines is the ability to pull himself up and attempt to walk. This usually takes place as the baby starts getting a year old, but could happen earlier or later too. Many attempts continue during this period, leading up to the final success. But, newborn hip dysplasia might be present if your child fails to show such signs. Walking tendencies could be absent, or the legs might not be straight, or could be a little bent. Such signs, including walking on tiptoed feet could all indicate a similar problem.

What Is Developmental Dysplasia of Hips (DDH) in Infant?

Congenital hip dysplasia in newborns or even ones that form later in life is all related to the hip joint. The joint in the hip is of the ball and socket type, which is kept in place by utilizing a variety of ligaments. However, in some children, these ligaments are not as firm and tight as they ought to be, causing them to loosen up and cause hip dysplasia to set in. 1 in 1,000 newborns tends to suffer from this problem right from birth, but only a few of them require treatment for its correction.

What Causes Hip Dysplasia in Babies?

The reasons behind hip dysplasia manifesting in some babies are multi-faceted. These tend to be dependent on a number of factors, some of which are a result of genetic traits, while others could be entirely environmental or even circumstantial. Gender plays an important role in this as well, since the documented cases of hip dysplasia have shown that female babies tend to be at a higher risk of developing this condition as compared to male babies.

Apart from various hereditary conditions that could affect the presence of hip dysplasia in a child, the circumstantial or environmental conditions that cause this depend quite a lot on the internal constitution of the mother’s body. Secretion of certain hormones could result in the baby responding ineffectively to them, and resulting in the hip development to be impacted due to it. The orientation of the baby in the breech position in the womb has also been concluded to result in this condition. If the uterus of the mother is excessively constricted that restricts free movement for the child, hip dysplasia could manifest in the baby as a result of it.

Who Are at Higher Risk of Getting DDH?

Since the environmental conditions are dependent on the intrauterine position of the child, first-time babies are comparatively at a higher risk, since the uterus is not as elastic as it needs to be on the first go. A few other factors contribute to an increased risk of hip dysplasia as well, namely:

What Are the Signs and Symptoms of Hip Dysplasia in a Young Child?

In most of the cases, babies that have had hip dysplasia have either a partial or a complete dislocation of the hip, where the ball within the joint doesn’t stay at the ideal position within the socket. As a result, this is usually observed externally as some problems related to the hip itself. Most doctors tend to observe signs and symptoms of hip dysplasia in the baby right when he is born. Certain hospitals do conduct special screenings, such as NIPE within 72 hours of birth, to rule out the condition. In rare cases, hip dysplasia might not be evident until the child grows up. If signs of the condition might be apparent, or the doctor tends to notice a pattern in the family’s history supporting the condition, additional procedures might be undertaken to confirm the diagnosis.

In such procedures, a preliminary x-ray test is undertaken to get a better picture regarding the development and pattern of bones. This can clearly indicate if the joint has any displacement or not. These results are further compounded by using an ultrasound of the hip, giving a better idea of the placement of internal organs, and helping rule out any further complications.

Conditions of hip dysplasia in babies can be corrected by making use of certain supportive procedures or even by undertaking hip dysplasia surgery. There are various methods to carry out each of them. Can You Prevent Hip Dysplasia in Infants?

As mentioned earlier, the reasons for hip dysplasia are multi-faceted. So, a particular aspect cannot be focused on to reduce the chances, since it could even be caused due to hereditary reasons. Most babies keep their thighs closer to the stomach, resulting in flexed hips. However, as they start kicking around, they get back to an appropriate position rather soon.

In order to support this, it is necessary to allow free leg movement for your baby at all times. Do not wrap him up tightly in a cloth for long durations. Tight swaddling is largely avoided these days. It is necessary to call up your doctor and inform him of the baby’s condition following the surgery, if your child is suffering from excessively cold toes, a foul smell or any kind of swelling from the place of the cast or wound, or an onset of fever accompanied by pain in the body.

The earlier a corrective action is taken to treat the condition, the better the chances are for the baby to respond to the treatment. Non-surgical treatments also provide a good result. However, additional treatments might be required, as the body structure changes with the child’s age.

Development of hip dysplasia cannot be prevented directly, and it isn’t a condition that is developed due to carelessness on anyone’s part. Being vigilant about it is absolutely necessary, and nipping the problem in the bud can benefit your child to a large degree, allowing him to lead a normal life as easily as possible.

Clicky Hips In Infants
How to Swaddle a Baby?

75 Hindu Goddess Saraswati Names for Your Baby Girl With Meaning